The governor of Arizona has suspended Uber from testing its self-driving cars on public roads in the state. The move follows a fatal crash last week that killed a 49-year-old pedestrian. 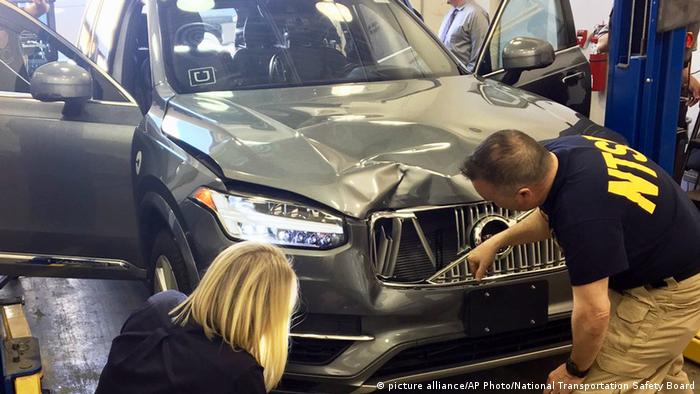 Arizona Governor Doug Ducey has suspended Uber's self-driving vehicle testing privileges on public roads in the state after a pedestrian was run over and killed in Phoenix last week.

On Monday, the Republican governor said he found a video released by police of the crash "disturbing and alarming."

Last week, police released a 22-second video showing a woman, Elaine Herzberg, walking out of a darkened area onto a street just before a SUV Volvo in self-driving mode hits her.

The car, with a human backup driver at the wheel, was going about 40 miles per hour (64 kilometers per hour) on a street with a 45 mile-per-hour speed limit when it hit Herzberg, according to local police.

In a letter sent to Uber Chief Executive Dara Khosrowshahi and shared with the media, Ducey said: "It [the crash] raises many questions about the ability of Uber to continue testing in Arizona."

The move marks a step back for Arizona after Ducey gave the green light in early March to self-driving vehicle companies to run tests without a person in the car to act as a safety operator.

Arizona has been a testing ground for Uber Technologies and other autonomous vehicle developers mainly due to its wide and open roads, good weather and the state's light regulatory touch.

Companies such as Uber only need to carry minimum liability insurance to operate self-driving cars in the state and are not required to track crashes or report any information.

The fatal crash in Phoenix was the first fatality involving a self-driving vehicle in the US.