The new pope has been named as Argentina’s Cardinal Jorge Mario Bergoglio. He is the first from the Americas. White smoke had been seen billowing from the Sistine Chapel's chimney about an hour earlier. 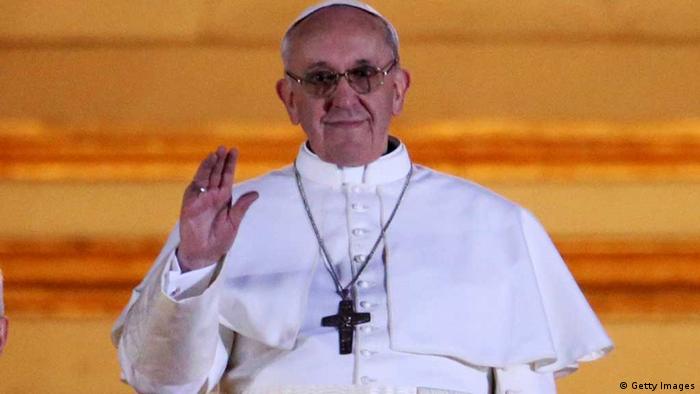 The new Bishop of Rome and 266th pope has been named as Argentina's Cardinal Jorge Mario Bergoglio, the Archbishop of Buenos Aires.

The 76-year-old Bergoglio has spent all of his career at home in Argentina and is known for both his keen political sensibility and self-effacing humility. He is known for modernizing a church in Argentina that had been among the most conservative in Latin America.

Pope Francis appeared wearing white on a central balcony overlooking St. Peter's Square after being dressed in his papal robes for the first time.

Now that the white smoke has risen, attention turns to the challenges Pope Francis I will face. Critics say he must reform old-fashioned rules and attitudes in the Catholic Church and open up to the modern world. (13.03.2013)

"You know that the duty of the conclave was to provide Rome with a bishop," he said. "It looks as though my brothers, the cardinals, went to fetch him at the edge of the world."

Bergoglio is known for his simple lifestyle, such as cooking his own meals and using public transport. He is the first ever pope to come from Latin America and the first from outside Europe in more than a millennium.

White smoke was seen billowing from the Sistine Chapel's chimney at just after 7 p.m local time, marking the end of a historic papal election process to replace Benedict XVI, who announced his desire to stand down in February.

The new pope is Franziskus

A Vatican band appeared on the square playing music, along with Swiss Guards in their full regalia.

Tens of thousands were gathered in St. Peter's Square, with cheers of “Habemus Papam," meaning “we have a pope,” sounding out as fumes emerged from the smokestack.

Produced by mixing the smoke from burning ballots with special flares, the signal meant that one cardinal had received the required two-thirds majority, or at least 77-votes, needed to become the new head of the Roman Catholic Church.

Between 30 minutes and one hour normally pass between the white smoke's appearing, the ringing of the Basilica's bells and the new pope making his appearance.