German archeologists said they had discovered a burial chamber in an ancient royal palace in Syria containing hundreds of bones and treasure thought to be 3,500 years old. 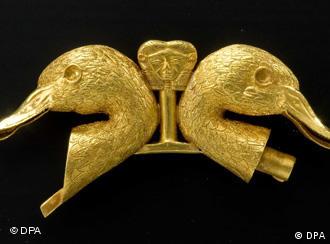 How the discovery affects earlier finds, like these duck heads, is unknown

The grave in the former city of Qatna's royal palace contains the remains of at least 30 people and is regarded as particularly spectacular because it had not been previously disturbed by grave robbers, archeologist Peter Pfaelzner told reporters on Monday.

"It's possible that the remains belong to members of the royal family or household," the University of Tuebingen archaeologist said.

"We still do not know exactly what role the new burial chambers played related to what we have already found," he added in comments to the daily Sueddeutsche Zeitung. "There is enough work here for generations of archaeologists."

Makeup containers were among the artifacts

The burial chamber was found in the Bronze Age city of Qatna, one of the most important kingdoms in ancient Syria. At its height, Qatna was home to some 20,000 and a major trading crossroads from Mesopotamia to the Mediterranean and from Anatolia to Egypt. Qatna's enemies burned down the city in 1340 B.C.

Alongside the bones, archeologists found ceramic pots, as well as containers made from alabaster and granite, originally from Egypt. Gold jewels and the stone sculpture of a monkey were also found.

One of three teams of archeologists working some 200 kilometers (124 miles) north of Damascus in what was once Qatna, Pfaelzner's work is based in city's palace and the western portion of the ancient city. A Syrian team is digging to the east of the palace and a group of Italians are excavating another section of the palace.

Artifacts found in earlier excavations will be put on display by the Wuerttemberg State Museum beginning on Oct. 17.

Dossier: Digging up the past

From the Stone Age to the Romans, German and European archeologists are busy discovering and preserving history at home and abroad. Read more about recent findings and ongoing projects. (21.07.2009)

The German archeology institute DEI links science and religion with its excavation projects in the Middle East. Now the century-old organization is getting a financial boost to help recruit and train young archeologists. (21.07.2009)

The human remains in an ancient Roman tomb may belong to Saint Paul, Pope Benedict XVI revealed in a surprise announcement. Now the Vatican wants to open the sarcophagus and conduct further tests. (29.06.2009)

Archeologists in Germany have uncovered what they think is a 35,000-year-old bone flute, making it the oldest known instrument in the world. (24.06.2009)