Archeologists have unearthed a rare find in the eastern German city of Erfurt: a medieval Jewish ritual bath. 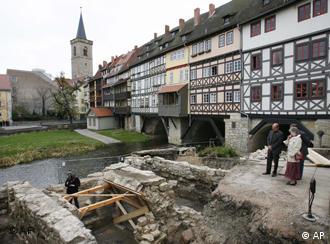 Remains of the Jewish ritual bath, called a mikwa, were found near Erfurt's Krämerbrücke (Krämer Bridge). The two-story high construction had been located in the cellar of a building along the bank of the Gera River. The bath was especially well preserved, according to Sven Ostritz of the Thuringian state authority for historical protection and archeology.

The Erfurt mikwa's existence had been documented in the year 1250, but in a systematic search for it several years ago archeologists had failed to locate it, Ostritz said. 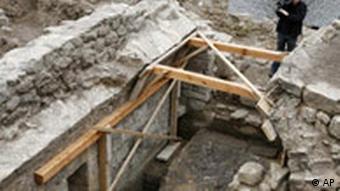 Archeologists now have to figure out how the mikwa worked

The town is also the site of a medieval synagogue, which was built around 1100 and is currently being renovated. The city plans to install a permanent exhibition on the importance of Erfurt's Jewish community in the building.

Few medieval mikwas have been preserved in Germany, Ostriz said, drawing attention to those in Worms, Speyer, Cologne and Sondershausen, which is also in the state of Thuringia.

The head of Thuringia's Jewish community, Wolfgang Nossen, told German news agency dpa that the find could help to make attract tourists to the town.

"Tourists only visit cities where they are offered something unique," he said.

Mikwas are used for the ritual washing of dishes and for women to clean themselves after menstruation and giving birth.

Even though Jews have been mostly exempted from serving in the German military for historical reasons, an increasing number are opting to do so. (08.01.2007)

DW-WORLD.DE spoke to French marine archeologist Franck Goddio, who brought lost parts of the legendary port of Alexandria and the ancient cities of Heracleion and Canopus back to light. (05.04.2007)

A UN construction site in Bonn was converted to an archeological dig when a 2,000-year-old Roman village was discovered. Jugs, plates, remnants of a public bath and a paved street reveal a surprisingly modern people. (04.09.2006)