Anticipation, Griping Increases Before Obama Speech in Berlin | Germany | News and in-depth reporting from Berlin and beyond | DW | 23.07.2008

The "Obama show," as one newspaper calls it, is set to take Berlin by storm on Thursday, July 24. But a small minority is questioning whether the Democratic candidate can live up to the hype -- or justify the costs. 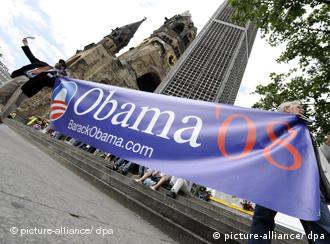 Obama fans are hoping for a massive turn-out in Berlin

In the build-up to what is probably the most anticipated American campaign speech ever held on foreign soil, one of Berlin's main city magazines offered its readership cut-out American flags to wave at Barack Obama's planned address.

The presumed Democratic nominee plans to arrive in the German capital on Thursday morning. Not much of his agenda for the day has been made public, but he is set to speak at Berlin's Victory Column -- formerly the main site of the Love Parade -- at 7:00 p.m. local time.

Those who want to hear Obama live have been told to start arriving three hours earlier. Berlin authorities say that as many as a million people could attend. Four TV stations are broadcasting the entire speech, and the rest are scrambling to secure prime locations at the site.

Only around 13,000 Americans live in Berlin. So what is motivating Berliners and Germans in general to treat a Democratic presidential hopeful to such a royal welcome? 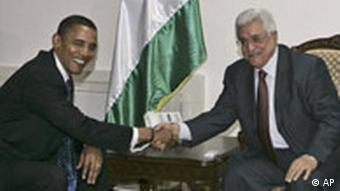 In comparison to US elections, German political campaigns are short, stolid and sober affairs that focus as much on party platforms as personalities. In the wake of World War II, many Germans view charismatic leadership with mistrust.

That, however, doesn't mean that ordinary Germans or the media are immune to the aura of a politician who knows how to work a crowd.

The current edition of Germany's most serious news weekly, Der Spiegel, features Obama on its cover with the only vaguely ironic headline "Germany Meets the Superstar" -- a play on the title of the German version of the TV show "American Idol."

And many German bloggers do seem to idolize the Illinois senator.

"For me he already is the American president," wrote one user of a Web site about Obama's Berlin visit. "He may not be have been elected, but he's the president in people's hearts." 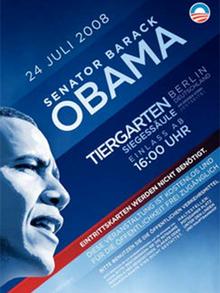 The posters for the event have drawn praise for their design

A significant part of Obama's popularity in Germany can be traced to the deep antipathy many Germans feel toward George W. Bush, particularly in the wake of the Iraq War.

There is an undertone of relief among German politicians that Bush will be gone in 2009. Asked about Obama's visit, figures from all the major parties stressed their hopes for greater cooperation, partnership and closeness between Germany and the US.

Most German leaders have been careful not to stray beyond such generalisms to avoid affronting Obama's Republican rival, John McCain, who has become a virtual non-entity in the German media.

But the Green Party's Deputy Parliamentary Leader voiced what many politicians, especially on the left, probably feel, when he told reporters, "Barack Obama's visit shows: there is another America." 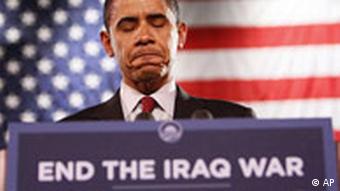 But not everyone, of course, is euphoric about the conditions under which Obama will appear in Berlin.

Those wishing to attend have been advised that signs and posters will be prohibited at the speech -- a move that has come in for criticism particularly from the left. There has been speculation that the Obama camps wants to avoid pictures of Germans making anti-American statements that could hurt the candidate back home.

Others say the ban is aimed at preventing political activists from making demands of Obama on uncomfortable issues. The World Wide Fund for Nature plans to flout the prohibition by issuing members T-shirts with pictures of polar bears and the words "Yes, You Can!" as a way of encouraging Obama to take a tougher line on environmental protection.

Moreover, some residents of Germany's perennially cash-strapped capital have taken umbrage at the fact that Obama's visit will cost a half-million euros ($786,000) -- half of which will be born by German public funds. 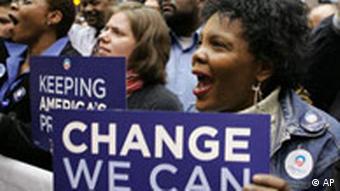 One change in Berlin -- no signs

"How come the German and the Berlin taxpayer has to pony up 250,000 euros so that Obama gets a nice television backdrop for his campaign?" asked one irritated blogger on the Web site of a local newspaper.

But another was quick to respond.

"What do you want, McCain to win?" that person asked. "It would be good if Obama won, and he can only do that if he convinces voters back home via the TV. So let the cameras show masses of people flocking to Obama through the Brandenburg Gate."

Obama originally wanted to speak at that symbolic location, but the event was moved after concerns that the Gate shouldn't be used for political purposes. Now the Democratic candidate hopes that huge crowds of cheering supporters, mostly foreign, at Victory Column will help him win November's election in the US.

After much debate, presumptive US presidential candidate Barack Obama will speak in front of Berlin’s Victory Column on Thursday. "Obamania" in Germany is now in full swing as the country awaits a political rock star. (21.07.2008)

US Presidents in Germany