A body found in a peat bog in northern Germany, first thought to be a murder victim, turned out to be a sensational archeological find: the 2,700 year old mummified corpse of a teenage girl. 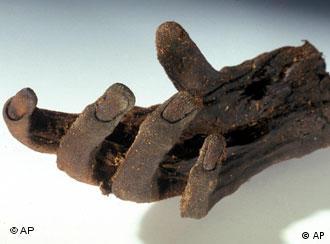 The hand belonging to "The Girl of the Uchter Moor"

At first the police thought the body of a teenage girl they were alerted to was evidence in an unsolved murder case. But upon closer examination, it turned out the suspected victim of foul play found a peat bog in the town of Uchte, Lower Saxony, was actually slightly older than first thought, some 2,700 years older.

Many of the body's hundred-odd parts were first dug out of the moor in 2000. At the time, the police homicide unit was assigned to the case, but when they failed to solve it, the file was archived and the moor body forgotten.

Then in January of this year, a local worker discovered a shriveled hand in the bog while digging turf. The police were once again put on the case, but this time, they recognized that the body was an archeological find rather than a criminal one.

On Monday, scientists said radiocarbon dating showed the bog body belonged to a teenage girl -- her age is estimated between 16 and 20 -- who lived around 650 BC. The State Authority for Historic Preservation in Lower Saxony called the body "one of the most meaningful archeological finds of the past forty years."

According to Henning Hassmann, the state archeologist of Lower Saxony, all the parts of the corpse appear to have been found except for one shoulder blade, though much of it was strewn about by modern digging equipment. Even the hair on the corpse's head was intact. 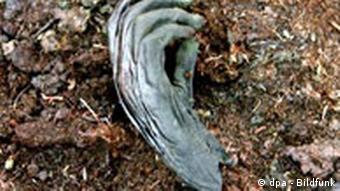 The State Museum of Lower Saxony said it is the only extensively preserved human body dating from the pre-Roman iron age to be found in Europe north of the Alps. Other bog bodies have been found, but they are typically older -- dating usually from around the time of Christ's birth. Only one body, found in the Netherlands, came from the Bronze Age. It is about 1,000 years older than the current find, which is being called "The Girl of the Uchter Moor."

Technological developments have made the discovery of intact bog bodies increasingly rare. Whereas people used to dig peat by hand, today huge machines make deep furrows in the dried out moors. Thus small, mummified body parts -- which are almost the same color as the peat -- remain undiscovered. A mummified body was last found in Lower Saxony 50 years ago.

Paleobiologist Andreas Bauerochse said the "Girl of the Moor" will be examined for clues to life 2,000 years ago. The find will keep scientists busy for a long time, he told the Mitteldeutsche Zeitung newspaper in an interview. "Today we have a handful of questions. In a week it will probably be two handfuls," he said.

Starting this Thursday, the body will be on display for a short time in the State Museum, where the public will have a chance to see the body before scientists begin testing.

Archeologists working on a dig in the southern German province of Swabia have unearthed what they claim to be the oldest statue in the history of art. (Dec. 19, 2003)

A project to faithfully reconstruct a 7,000 year-old solar observatory, the oldest of its kind in Europe, began this week at Goseck in the German state of Saxony. (June 3, 2005)