Aiming to end an election dispute, Afghanistan's presidential rivals signed a deal to form a national unity government. But the pact is also a setback to the country's democratic transition, analyst Scott Smith tells DW. 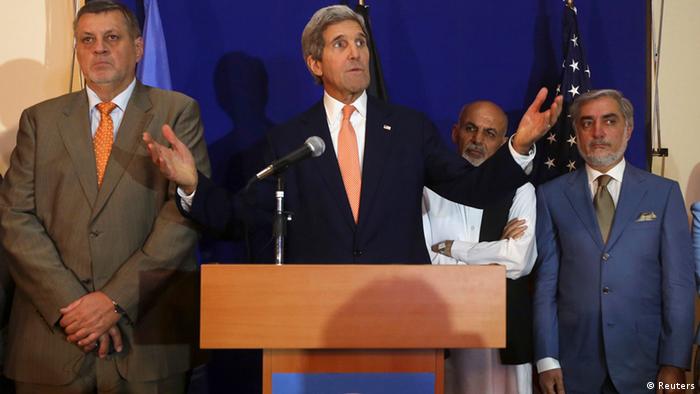 The two rivals for the Afghan presidency - Ashraf Ghani and Abdullah Abdullah - signed the agreement on August 8 to form the unity government regardless of who emerges as the winner of the contested election. The accord came as US Secretary of State John Kerry held talks in Afghanistan with both candidates and outgoing President Hamid Karzai aimed at preventing the country from plunging into political chaos and ethnic conflict amid a dispute over electoral fraud.

The two candidates made the joint-declaration at the residence of the UN Special Representative in Kabul, vowing to work together after an ongoing audit - of all 8.1 million votes - declares who won the June 14 election runoff. They also said they hoped the results would be announced by the end of August. An earlier deal brokered by Kerry last month was marred by disagreements between the candidates over the criteria for the vote-counting.

Scott Smith, director of the Afghanistan & Central Asia program at the United States Institute of Peace, says in a DW interview that the latest agreement is not essentially the same as the one brokered by Kerry in July and adds that the tragedy of the situation is that Afghan voters have proved to be more ready for democracy than Afghan elites.

DW: How likely is it that this agreement will resolve the election dispute?

Scott Smith: The key point about the agreement is that it signals that the candidates recognize that there is a time limit on resolving their dispute. Up to now, they have acted as if they have infinite time to determine who won the election. The security and economic situation in Afghanistan are deteriorating rapidly under the uncertainty of this election. 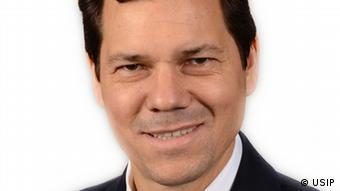 Smith: "This national unity government is the result of a failed election and therefore a democracy that has not matured"

The effect on the ongoing audit, however, is unclear. The deal reportedly includes the establishment of a commission that will ensure a result by the end of August. But a properly conducted audit proceeds at its own pace, and this audit has been extremely slow for political and logistical reasons.

The political reasons have to do with the agents of both candidates challenging decisions taken by the electoral authorities. If the audit is to be credible, and to conclude according to the timeline set by the agreement, both candidates will have to accept with more readiness the decisions of the electoral commission staff who are examining the ballots.

What can you tell us about the agreement?

The agreement has not been made public, so the only information available is that which has been reported by the press. These reports say that the deal is essentially the same as the one that Kerry brokered in July: both parties agree to accept the results of the audit, and both agree to share power whoever is the winner.

The novel elements appear to be the acceptance of a deadline in which to resolve the election dispute, and the creation of a joint commission to ensure the deadline is met. For the deal to succeed, both parties will need to work with each other with far greater will and trust than they have demonstrated so far.

Under the deal, the unity government would be formed regardless of who emerges as the winner. Doesn't this undermine the election results and the whole idea of conducting elections?

EU: 'A slight delay is better than an electoral crisis'

Afghanistan's audit of millions of ballots from the presidential runoff vote is being slowed down by disputes. But Thijs Berman, the EU's chief election observer, tells DW what matters is that the audit is done properly. (21.07.2014)

Election deal may lead to changes in Afghan government

A deal brokered by US State Secretary John Kerry aimed at ending the electoral stalemate in Afghanistan may bring about key changes in the South Asian nation's governmental system. (15.07.2014)

Unfortunately, I believe that it does. There was certainly a great deal of fraud committed, but there were also millions of voters who took risks to cast their ballots and voted in good faith. The audit process has turned these votes into objects of negotiation between the two candidates. After the first round of the election many people argued that the two candidates should make a political deal, instead of contesting a second round that would be expensive, violent and divisive.

I was among those who argued the opposite: that a second round should be held and Afghan voters should be allowed to make their choice. In the end, however, the issue has come down to deal-making anyway. The tragedy of the situation is that Afghan voters have proved to be more ready for democracy than Afghan elites. This is an immense setback to Afghanistan's democratic transition. Perhaps it is a necessary price to pay for stability, but it is a price nonetheless.

In the best case, these governments are able to maintain stability and prevent a return to violence, but they are rarely able to enact significant reforms. One of the hopes from the 2014 Afghan election was to have a new, clear, and decisive government able to initiate coherent and necessary reforms that have been neglected under President Karzai.

If power-sharing means a division of government spoils among the same elites that have presided over one of the most corrupt governments in the world, then these reforms are unlikely to take place and international support for Afghanistan will decline. So far there are few details of how the mechanics of power-sharing will work. 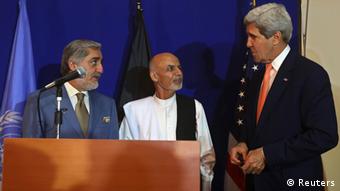 The novel elements of the deal appear to be the acceptance of a deadline in which to resolve the election, and the creation of a joint commission to ensure the deadline is met, says Smith

After the July agreement, both parties offered widely divergent interpretations. Beyond the notion of the creation of a "Chief Executive", the proposed power-sharing deal is vague. These details are likely to be negotiated to some extent as the audit continues, but will become more concrete once it is clear who is likely to win.

Commentators have expressed concerns about the absence of an opposition within a unity government. Isn't an opposition an essential part of a democratic system?

Mature democracies depend on the existence of an opposition. This national unity government is the result of a failed election and therefore a democracy that has not matured. There will surely be opposition within the government, but it will not be an accountable opposition or a necessarily visible one. The other question is what will happen over time.

In power-sharing agreements there is still normally a dominant party. In many cases, the dominant party is able to consolidate its position within the unity government, co-opting or discrediting its opposition, and emerging more powerful for the next election.

This suggests that if one is interested in political progress and democratization, it is often better to accept the role of a formal opposition and engage in a contest of power from that position, rather than enter a unity government. If one is interested receiving the spoils of power, however, a government of national unity is ideal.

Why is the US so keen to have a presidential inauguration by the end of August?

There is a very pragmatic reason for this, which is the result of two crucial decisions taken last year, one by President Karzai and one by US President Barack Obama. In 2013, the two governments negotiated a Bilateral Security Agreement (BSA), which establishes the conditions under which US troops can remain in Afghanistan. 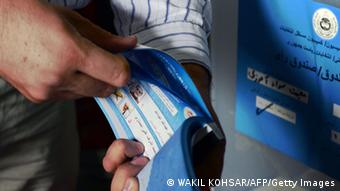 The audit process has turned these votes into objects of negotiation between the two candidates, says Smith

The agreement addresses issues such as legal immunities, rules of movement, establishment of bases, and so forth. President Obama said that if the agreement was not signed by the end of 2014, he would withdraw all US troops.

President Karzai decided that he would not sign the agreement, and that his successor should decide. Now the logistical timeline of a withdrawal have collided with the extended timeline of the electoral crisis. The US still has around 30,000 troops in Afghanistan and withdrawing them will take several months.

Therefore, the US needs to decide at what point it lacks confidence that the BSA will be signed and therefore needs to begin a full withdrawal. The date that has been set is the NATO head of state summit in Cardiff, Wales, on September 5. That is the reason for the inauguration by the end of August.

Scott Smith is the director of the Afghanistan & Central Asia program at the Washington-based United States Institute of Peace.