American scientists Eric Betzig and William Moerner and Germany's Stefan Hell have been awarded the 2014 Nobel Prize in Chemistry. They were recognized for the development of super-resolved fluorescence microscopy. 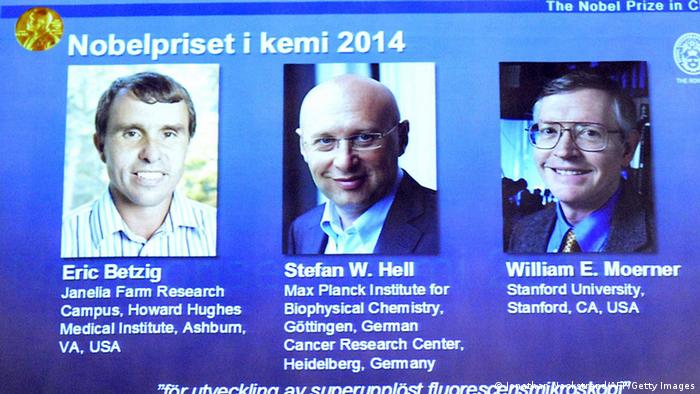 The Royal Swedish Academy of Sciences continued its week of highly anticipated announcements on Wednesday with naming this year's winners of the Nobel Prize in Chemistry: Eric Betzig and William Moerner of the United States and Stefan Hell of Germany.

The trio's "ground-breaking work has brought optical microscopy into the nanodimension," the Academy said.

With the help of fluorescent molecules, Betzig, Moerner and Hell had "ingeniously circumvented" a limitation which had long held back microscopy research - namely, the need for "a better resolution than half the wavelength of light."

Hell, who said he was "totally surprised" by the news, heads the Max Planck Institute for Biophysical Chemistry in Germany.

Betzig works at the Howard Hughes Medical Institute outside of Washington, D.C. and Moerner is a professor at Stanford University.

Of the fields recognized by the prize committee, chemistry has the closest ties to the award's founder, Alfred Nobel, who invented dynamite, among his other accomplishments.

The 2013 prize was given to Martin Karplus, Michael Levitt and Arieh Warshel for their contribution to computer models which had facilitated the understanding and prediction of chemical processes.

Thus far, all of this year's Nobel prizes have gone to groups of three.

On Monday, a trio of brain researchers won the Nobel prize for medicine for discovering an "inner GPS," referring to the function in the brain that "makes it possible to orient ourselves in space, demonstrating a cellular basis for higher cognitive function."

The following day, three researchers in the field of physics were recognized for inventing the energy-saving, blue-light emitting diodes, commonly known as LEDs.

The research group will split the 8 million Swedish crowns ($1.1 million; 870,000 euros) in prize money. They will receive their prize in Stockholm on December 10 at a formal ceremony.

Men are said to be better than women at creating maps in their brains. But as the three winners of the 2014 Nobel Prize in Medicine show, even mice have brain cells for navigation.

Three Japanese scientists are sharing the Nobel Prize in Physics 2014: Isamu Akasaki, Hiroshi Amano and Shuji Nakamura. Their discovery? They revolutionized the light. Here's a chronical summary of today. (07.10.2014)

Martin Karplus, Michael Levitt and Arieh Warshel have been awarded the 2013 Nobel Prize in Chemistry. The trio were recognized for their development of multiscale models for complex chemical systems. (09.10.2013)