Amazon has come under more pressure in Germany over its treatment of employees. With a new strike underway, the press published internal reports detailing to the minute where and for how long workers did not work. 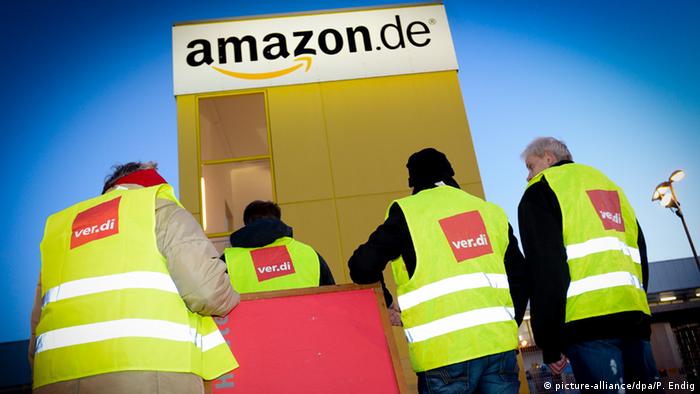 Services trade union Verdi, which released the reports, accused Amazon of keeping its workers under surveillance via the mobile devices that all Amazon warehouse workers have to carry round with them to scan parcels.

The report added that by taking these unpermitted breaks, "the employee has violated their contractual duty to perform their work." "The interruptions of work should in these cases … been reported to the manager," it read.

Verdi spokesman Stefan Najda also told "Die Welt" newspaper that workers active in the trade union were being especially targeted, a claim that Amazon denied. Amazon declined to comment on the document published by the paper, on the grounds that it wasn't clear from which plant it originated. "We don't know anything," a spokeswoman said. Verdi believes the practice is standard throughout the company.

Verdi also believes this is just one of many strategies Amazon uses to pressure potentially critical workers, including offering them compensation deals to leave the company and checking employees' private Facebook profiles for any criticism of Amazon and then sending them warnings.

According to Verdi, the working conditions in Amazon warehouses in Germany are unacceptable, citing extreme pressure, physical exhaustion, and robotic work routines. The union has been embroiled in a wage dispute with the retailer for the past two years, with this Friday's strike at the Leipzig plant, timed to coincide with the run-up to Easter and the Leipzig book fair, representing the latest battle.

Amazon denies all of Verdi's accusations. "Employees at German logistics centers earn very competitive wages," the company said on its website, citing figures of 10.09 euros an hour ($10.68), rising to 12.69 euros an hour after two years.

The company said it would be able to handle the strike by re-routing orders through the rest of its European network, which includes 28 locations.

German consumers may be spending more this month, but they are less likely to order from Amazon. That's because about a fifth of Germans disagree with the company's labor policies, according to a new survey. (19.12.2014)

As Amazon employees in Germany go on strike, the company has opened three new logistics centers in Poland. They will largely serve the German market, as Amazon does not have e-commerce operations in Poland. (16.12.2014)

Workers at Amazon warehouses in Germany have launched a fresh strike, the latest in an ongoing wage dispute with the US-based online retailer. The walkout is aimed to coincide with the company's peak holiday season. (15.12.2014)

Online retail giant Amazon has announced the purchase of primary health care provider One Medical, expanding its presence in yet another key market.

Amazon has offered to "refrain" from using the data of competitors after the EU accused the US retail and tech giant of collecting the information to benefit itself at the expense of its rivals.