Amazon workers in Germany strike ahead of major sale

German labor union Verdi has called on employees at Amazon facilities to go on strike. Workers pushing for better wages have timed the work stoppage to coincide with a major sale day for the online retailer. 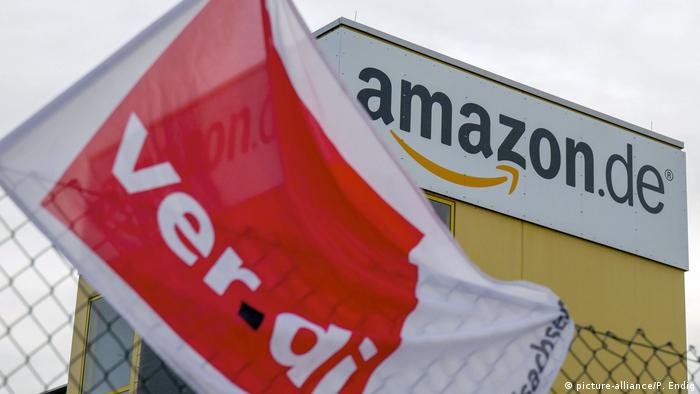 Workers at seven Amazon facilities around Germany went on strike on Monday. Trade union Verdi said the strike, which comes ahead of Amazon's "Prime Day" sale on Tuesday, is being carried out under the motto "No more discounts on our income."

Amazon operates 12 storage facilities and 11 logistics centers in Germany, employing some 13,000 people, of which 2,000 took part in the strike.

Verdi has been pushing for better wages for workers at the company for more than six years. The union also wants a collective wage agreement, as is common in the retail and mail-order trades.

"While Amazon blasts its prices with hefty discounts for bargain hunters on Prime Day, the employees are being denied a living wage," said Verdi trade expert Orhan Akman.

Amazon has repeatedly argued it is a "responsible employer," despite not having a collective wage agreement. It says the wages it pays are "at the upper end of what is usual for comparable jobs." The starting wage before tax in Germany, it says, is at least €10.78 ($12.15) per hour, with workers earning an average of €2,397 ($2,702.50) per month after 24 months.

In a separate protest that began on Sunday evening and went into Monday morning, 40 Greenpeace activists climbed onto the roof of an Amazon facility in Winsen in the state of Lower Saxony. The demonstrators were protesting the online retail giant's destruction of many new goods returned to it by purchasers.

Greenpeace says some 30% of returns are not resold. Amazon, for its part, said in June that the overwhelming majority of returns were either sold again directly, returned to suppliers or donated to charitable organizations.

US reaches 'tentative' agreement with rail workers to avert strike 15.09.2022

US President Joe Biden said the deal was "a win" both for the economy and rail workers. It comes as midterm elections loom.