Alleged neo-Nazi killing spree: A new form of right-wing terrorism? | Germany| News and in-depth reporting from Berlin and beyond | DW | 18.11.2011

Experts are not in agreement on whether the neo-Nazi cell allegedly responsible for 10 murders can be classified as "terrorist," or whether the word "extremist" is enough. 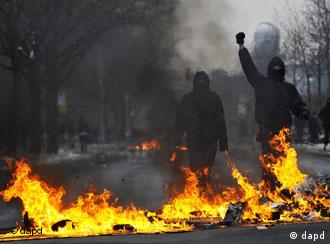 Terrorism is about sending a message, experts say

"In 2010, no right-wing terrorist structures were identifiable," read the annually report of the Federal Office for the Protection of the Constitution, released this summer. In light of the details surrounding the recently uncovered series of murders allegedly committed by three neo-Nazis, this statement takes on new meaning. Were intelligence agencies simply unable to identify anything, or did they turn a blind eye to the evidence?

For extremism researcher Uwe Backes of Dresden Technical University, the case of the so-called National Sociatlist Underground is not entirely clear.

"Now we're talking about right-wing terrorism, but this label seems to me to be inappropriate for this group," he said. 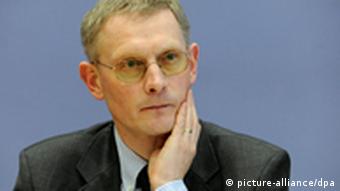 Uwe Backes said the group was certainly extreme, but not necessarily 'terrorist'

Under the common definition of terrorism, Backes said, the act of terrorism must be a form of communication or a message to the public.

"Terror means to scare, terrorists want to create fear," Backes said. "On the other hand, they want to promote their beliefs. But if the terrorists don't communicate, if they don't send out a message, if they don't make any public claim of responsibility, then does it have anything at all to do with terrorism?"

Backes said the lack of any public acknowledgment of its crimes makes it difficult to classify the neo-Nazi cell as a terrorist group - at least under the current, incomplete understanding of its activities.

But certain authorities apparently had indeed heard such a message: In the summer of 2010, a song called "Döner Killer" was released by the right-wing extremist band "Gigi und die braunen Stadtmusikanten" (Gigi and the Brown Town Musicians) along with an accompanying video on Youtube. The lyrics say, "In all the kebabs there is fear and terror. The döner sticks in the throat... because nine is not enough." 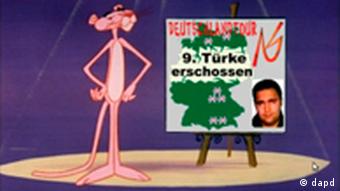 A cynical video by the neo-Nazi cell has surfaced, claiming responsibility for the murders

It cannot currently be proven that the song's author had any knowledge of the murders, but it is entirely possible.

Making the matter even hazier is the fact that the three suspects apparently had indeed prepared an explicit digital declaration of responsibility - a DVD that documents the murders and ridicules the victims. The entire video is accompanied by an animation of the Pink Panther as narrator.

The SS as role models

The insidious motto in the film is "Actions speak louder than words," and that fits in with the historic example of many right-wing terrorist groups, according to Hajo Funke, political scientist at the Free University of Berlin and an expert on right-wing extremism.

"In fact we see in Islamist terror groups an element of 'frightening and terrorizing' in Madrid, or in other places," he said. "But it's also 'terror' when someone wants to completely eradicate a certain group of people, or representatives of a group of people deemed to be enemies - thus terror can be murder." 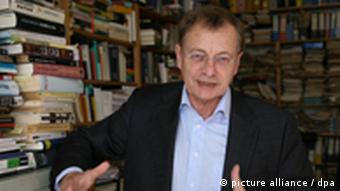 The assumption that the murder spree sent no discernable message is incorrect, Funke said, in part because forensic psychological experts had clearly perceived such a message.

"Authorities in Bavaria found one consistency among these murders: they all were connected to right-wing radicals," he said. "In other words, they discussed this dimension, but did not make it sufficiently public. That is a serious failure of the authorities."

Especially culpable is the Thuringia State Office for the Protection of the Constitution, Funke said. The office had reportedly been received information from a paid informant after the founding of the cell in 1998, but did nothing. Thus sections of the office are implicated in the crimes, Funke said: "I conclude, in fact, that the state's failure is also the state's involvement."

Issues of democracy and globalization are on the minds of the readers after a gang of neo-Nazis was found to be murdering immigrants in Germany. (16.11.2011)

German authorities believe the neo-Nazi group allegedly behind a string of immigrant murders in the past may have had a bigger network than previously assumed. The case continues to raise many questions. (16.11.2011)