Leonie von Hase has won the annual beauty contest overcoming 15 other contestants in the final. She will now assume the role for the next 12 months.

Leonie von Hase became the 2020 Miss Germany on Saturday night after the Namibian-born online entrepreneur scooped the big prize ahead of Lara Runarsson, Michelle-Anastasia Masalis and 13 other finalists.

At 35, von Hase was the oldest participant in this year's final, which for this year adopted the motto "Empowering Authentic Women."

"Women have not been interested in striving for a conventional standard of beauty for a long time now," von Hase said on the Miss Germany website. "My perception of a 'beautiful' woman is the strength, character and authenticity she radiates."

The event took place at the Europa Park Arena near Freiburg in southern Germany for the 18th consecutive year and von Hase won over the six-woman-strong jury after also winning the state of Schleswig-Holstein nomination at the end of last year. Each of Germany's 16 states sends one contestant to the Miss Germany finals.

For the first time, the 2020 Miss Germany contest allowed married women and mothers to participate and did not include a bikini contest. This year's contest also saw the age limit raised by 10 years to include women up to 39 years old. Participants must be at least 18 years old to take part.

This will be just the beginning for the vintage clothing businesswoman, who was presented with the crown by last year's winner, Nadine Berneis, as she embarks on a year in the role. 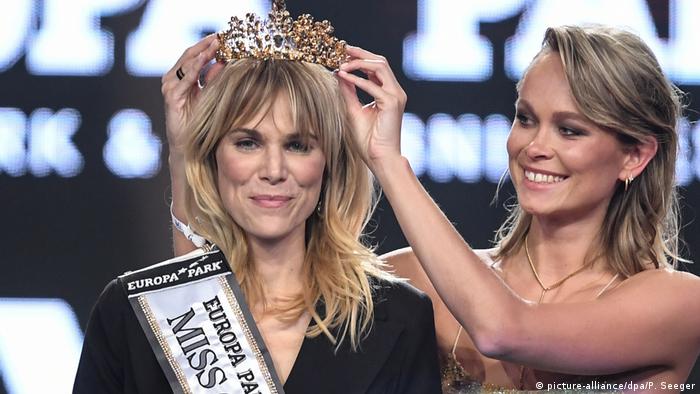 Von Hase will appear on the cover of JOY magazine, as well as receiving a VW Golf GTI. She also took home a number of hair and beauty products, in addition to a selection of shoes.

The runner-up, who gets the title Vice Miss Germany, was 22-year-old Lara Runarsson, who previously won the Bavarian contest that earned her a place in the final.

The show was presented by celebrity couple Jana and Thore Schölermann and featured singer-songwriter Kelvin Jones who provided musical entertainment.

In a region where many communities chastise unmarried women for not being "virgins," tampons, believed by some to cause hymen breakage, are still rare. (15.10.2019)

The leadership of the Miss America Organization, which holds annual beauty pageants in the US, has stepped down, after emails revealed comments on former beauty queens' appearance and sex lives. (23.12.2017)

Miss Philippines Catriona Gray is the new Miss Universe 2018. Contestants, including the pageant's first transgender candidate from Spain, met in Bangkok for the competition under the motto "empowered women." (17.12.2018)