′All my fault′: South Korea′s president accepts responsibility for scandal | Asia | An in-depth look at news from across the continent | DW | 04.11.2016

'All my fault': South Korea's president accepts responsibility for scandal

In a tearful speech, President Park Geun-hye has vowed to allow prosecutors to investigate her. The embattled head of state has been rocked by a corruption scandal surrounding her longtime friend. 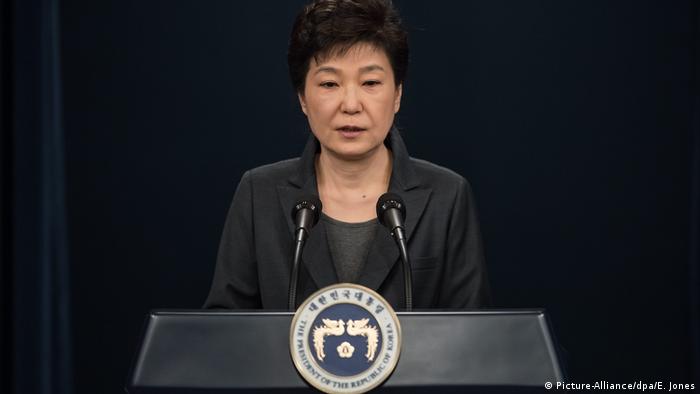 A political scandal in South Korea has given the North new reason to claim that the South is corrupt and that Pyongyang should be the "legitimate" ruler of the peninsula. Julian Ryall reports from Tokyo.

South Korea's President Park Geun-hye on Friday said her "heart was breaking" over a political scandal that has prompted thousands to protest across the nation.

Police on Monday arrested Park's long-time friend Choi Soon-sil, who allegedly used her proximity to the president to influence state affairs and unlawfully direct funds to two non-profit organizations under her control.

"It is very miserable and regrettable that a particular individual is said to have taken profits and committed several unlawful acts, while we are working on a job in hopes of helping the national economy and people's lives," said Park.

The president said she would allow a direct investigation into her actions, adding that she allowed Choi to assist in editing her speeches and relied on her for undefined "public relations" issues.

"It is true that I lowered the wall of caution myself because she stood by me in the most difficult period in my life," she added, referring to her friendship with Choi in the wake of her father's assassination in 1979. "I've already cut all the connections in my heart, but from now on I will completely break my private connections."

Since the scandal erupted last week, Park's approval ratings have sunk to an all-time low for South Korea, reaching 5 percent, a 12-percent drop from last week, according to a Gallup poll published Friday.

In a 2007 US diplomatic cable, an official described Choi's father, who led a now-defunct religious sect, as the "Korean Rasputin," alluding to an adviser to Russia's late tsar.

Local media alleged that Choi inherited her father's influence, claiming that she held a shamanistic ritual with Park at the presidential compound, reports the president dismissed.

"There is even talk that I fell into a cult or I held a shamanistic ritual at the Blue House," Park said. "I am saying clearly: none of this is true."

Police detained at least one other aid to Park, and have considered arrest warrants for others.

An affair of politics and cult swirls in Seoul