All Eyes on Dresden in German Election

Germany's election on Sunday could face legal challenges amid allegations of unfairness: Voters in the eastern city of Dresden will head to the polls two weeks later due to the death of a parliamentary candidate. 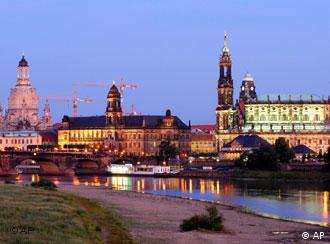 The election in Dresden was postponed by Germany's federal election commissioner after Kerstin Lorenz, the candidate for the neo-Nazi National Democratic Party (NPD) died of a stroke last week. A replacement has already been found in Franz Schönhuber, the former national leader of another right wing-extremist party, but there isn't enough time to reprint ballots before Sunday.

As the race for the chancellery becomes tighter with the election just days away, politicians and legal experts are mulling the ramifications of a late vote in Dresden, with some saying that a delayed election could throw into question the legality of the national vote.

Experts such as Werner Patzelt, a political scientist from Dresden University, predicted political turmoil if the race turns out to be extremely narrow as in the last election, where Social Democrats (SPD) only had about 6,000 votes more than the Christian Democrats (CDU). 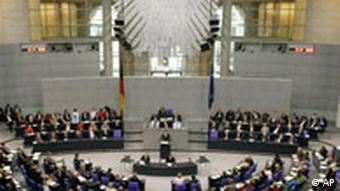 The German parliament's make-up might not be known until Oct. 2

"Should the question of whether we'll see a grand coalition (CDU and SPD) or one between the CDU and the (free-market) liberal Free Democrats (FDP) hinge on a single mandate, then indeed the postponed election in the Dresden constituency may be of crucial importance," he told DW-RADIO.

Hans Meyer, a professor of constitutional law and former president of Berlin's Humboldt University, said he believes the election outcome will be challenged should Dresdeners vote after the results in the rest of the country have already become public. 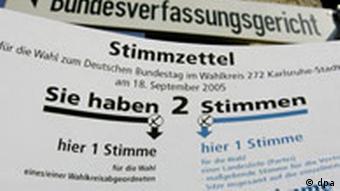 In an interview with Bavarian public broadcaster BR, Meyer added that Dresdeners should at least vote for a party on Sunday. In Germany, each voter has two votes -- one to elect a direct candidate for his or her constituency and another to choose a political party that then gets parliamentary seats according to the percentage of votes it achieves.

One party that supports such a splitting of votes in Dresden is Germany's new Left Party, which consists of the successor party to the former communist party of East Germany and disgruntled Social Democrats from western Germany.

"That way we want to avoid distortions which would happen if Dresdeners already know the result from the rest of the country," Hendrik Thalheim, a party spokesman, told the newspaper die tageszeitung. 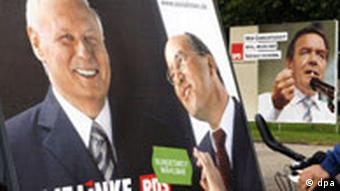 Supporters of Chancellor Gerhard Schröder might end up voting for the Left Party in Dresden.

The Left Party fears that a late election in Dresden could harm their chances to win a direct seat in Dresden. Others believe, however, that a late vote might actually help the party as Social Democrats might tactically support the Left Party's candidate to prevent an extra seat for the Christian Democrats, whose candidate is leading in the polls.

While local candidates for other parties also complained about the postponed election, officials at the national level said they didn't see this as a problem.

"Maybe it's possible in Africa to hold back election results for a couple of weeks, but you cannot do that in Germany," Dirk Niebel, the FDP's general secretary, said on the morning show of Germany's public broadcasters.

Other legal experts also said that there was nothing illegal about a late vote in Dresden.

German Chancellor Gerhard Schröder and his conservative rival Angela Merkel have started their campaigns in the eastern parts of the country. The two are not only fighting each other, but also the new Left Party. (Aug. 16, 2005)

Just over a week before Germany heads to the polls, the death of a far-right candidate and the shrinking of the once-solid lead enjoyed by the conservatives have complicated the outcome of the general elections. (Sept. 9, 2005)