Aldi and bakers in spat over fresh bread | Business | Economy and finance news from a German perspective | DW | 03.03.2011

Aldi and bakers in spat over fresh bread

German bakers have taken discount store Aldi to court over its claim that machines in its stores dispense freshly baked bread at the touch of a button. A judge who wanted a look at the raw dough was denied permission. 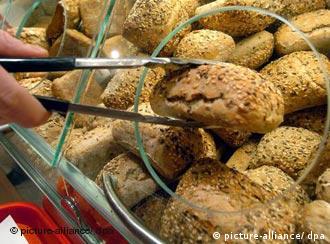 When customers visit one of the 1,770 Aldi Süd stores equipped with a self-service bread machine in the southern and western parts of Germany, they may think they've walked into the future. They simply press a button on a machine panel, and out pops what the discount chain claims is freshly baked bread.

But it's too good to be true, according to the German Bakers' Confederation in Berlin, which has brought a lawsuit against the chain claiming false advertising. They believe the machines simply warm up the bread, and maybe put a bit of a brown crust on it.

The fight recently heated up when Aldi denied a judge in Duisburg - where the lawsuit has been filed - the right to inspect the raw dough fed into the machines, which are largely hidden from customers' view.

Armin Werner of the German Bakers' Confederation told Deutsche Welle that "there are very strong indicators that they have something to hide."

"Various bakers discovered that the bread comes out at different temperatures, and that sometimes the rolls come out with a still-frozen center," he said. "We found their advertising claim that 'we're baking bread and rolls for you all day long' to be impudent." 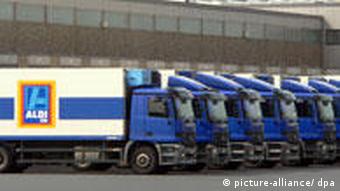 Not your neighborhood bakery: Aldi's claim it offers fresh bread have been contested

When contacted by Deutsche Welle, Aldi Süd reiterated that a baking process takes place in its machines, and claimed it was protecting a trade secret by not allowing the judge access. Its supplier, Düsseldorf-based industrial baker Leiken, declined to comment.

In a country with 300 individual bread types and a baking tradition dating at least to the Middle Ages, the issue of bread can be a sensitive one. Independent, artisanal bakers who Germans used to purchase their bread from have long been losing market share to nationwide franchises and discount chains.

But self-service bakeries only have 2 to 3 percent of the market, mainly because their low prices cause them to depend on sheer volume in order to profit, according to the German Bakers' Confederation. That means they need plenty of foot traffic. Back-Factory locations reportedly receive between 1,000 and 8,000 customers each day, depending on their location. 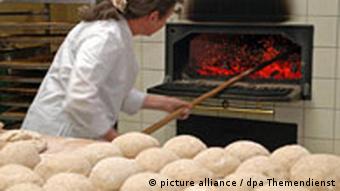 Germany's baking tradition dates back to at least the Middle Ages

Reinald Wolf, an editor with the trade publication Allgemeine BäckerZeitung, says bakers generally aren't too concerned about their self-service counterparts.

"The grocery discounters are the ones who are making life difficult for bakers," he told Deutsche Welle. "They just undercut prices, and bakers can't match them."

Aldi's bread machine has been dubbed a "black box" in industry circles, according to Wolf, who added that the quality of bread coming from such machines varies greatly. By contrast, chains like Lidl, NORMA and Real bake bread in convection ovens on the sales floor, something which has won over customers.

"Of course that's more attractive because it is transparent - you can watch as it's done - and the bread stays fresher longer," Wolf said. "But in neighborhoods with these kinds of stores, revenues (for bakers) have to some degree dropped - sometimes up to 10 or 20 percent."

For all their love of bread, German consumers are also known for extreme frugality when it comes to food. Not only do discount grocers provide the convenience of a one-stop shop, they are also willing to cut their prices to a bare minimum.

NORMA, for instance, recently reduced the price of a 1 kilogram loaf of bread by 10 euro cents to 1.19 euros and ciabatta-style bread from 35 to 29 euro cents. But as with many other foods in Germany, highly discounted prices may come at the expense of quality. 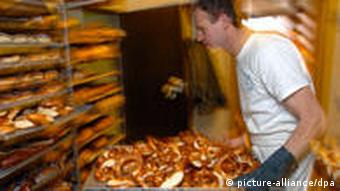 In the case of Aldi, the German Bakers' Confederation has also accused the discounter of skimping on ingredients. It claims the mixed rye bread available in Aldi's bread machines only contain 34 percent rye flour, instead of the regulation 50 to 90 percent.

"Concepts like Lidl has are significantly more threatening than that of Aldi," Werner said. "It's very difficult - year after year our bakery branch looses a little bit of market share to the grocery industry."

The baker: Reinhard Brauer from Aerzen

Bread is a staple of the German diet, and nowhere in the world boasts quite as many types of bread – just ask Reinhard Brauer, who runs a chain of bakeries in Aerzen, a small village in Lower Saxony. (28.06.2010)

From food to flights: The discount business model

Theo Albrecht, co-founder of the Aldi discount supermarket chain Aldi, died this week, but the business model he helped create is here to stay, and its success has already spread far beyond the grocery sector. (29.07.2010)

Theo Albrecht, co-founder of the Aldi supermarket chain, has died. Together with his brother Karl, he built up the discounting chain that made the two brothers the richest men in Germany. (28.07.2010)