Albania′s parliament votes for probe into anti-government protests | Europe | News and current affairs from around the continent | DW | 24.01.2011

Albanian ministers have voted to launch an investigation into anti-government unrest that hit the country last week. Opposition leaders have responded by calling for more rallies over the next week. 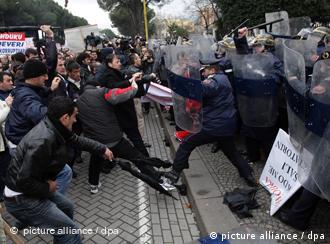 Violent protests took place on the streets of Tirana on Friday

Albania's parliament has voted to establish a special inquiry commission to investigate the violent protests which plagued the capital, Tirana, last week.

"This inquiry commission will examine all the evidence to reveal the truth about the coup d'etat staged January 21 with the aim of overthrowing the constitutional order," said parliament speaker Jozefina Topalli.

The commission will have a three-month-mandate to investigate the violent clashes which took place when tens of thousands of people demonstrated outside the government headquarters in central Tirana.

Three people were shot dead by police in the protests and a fourth remains in a critical condition. 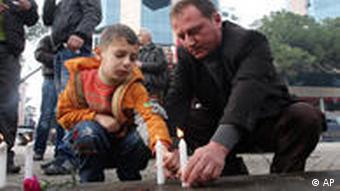 Albanians want answers over the deaths of three protesters

Meanwhile, the opposition Socialist Party and the ruling coalition remain in a deadlock, with both calling for further rallies to take place this week

Despite calls for calm from international representatives, the prime minister has called for his supporters to meet in Tirana on Saturday for an anti-violence rally.

Opposition Socialist Party leader and Tirana Mayor Edi Rama also called for new protests after attending the burials of two of the victims on a day of mourning Sunday.

"You must come to honor the victims, to condemn the violence and the crimes that cost three innocent men their lives," Rama said during one funeral service in the southern town of Fieri.

Albania has been in a political standoff since its last elections in July 2009. The opposition refuses to recognize the results, blocking legislation and reforms in parliament.

The images of violence and unrest in Albania seem like scenes from the 1990s. DW's Vilma Filaj-Ballvora says they show that the country must finally undertake urgently needed reforms. (24.01.2011)

Albania's leading party and opposition are blaming each other after three people died in violent clashes. Prime Minister Sali Berisha and his political rival Edi Rama have both urged supporters to take to the streets. (23.01.2011)

EU calls for calm as three die in Albanian protests

Three people have been shot dead in clashes between demonstrators and security forces in the Albanian capital Tirana. Dozens more civilians and police have been injured. (21.01.2011)