Alaska's Bristol Bay is a unique ecosystem, home of the world's largest wild salmon fishery. The fish management is exemplary, but the people around the bay fear for their existence. 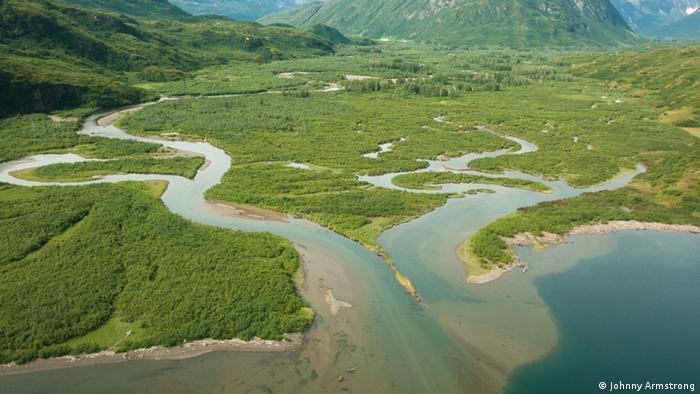 Hjlmar Olson can still remember fishing for salmon in Bristol Bay from mid-June to mid-July in the 1940s using a net secured to the shore and a drift net in the sea. Fisherman today still keep the first catch for themselves just as they did back then. Everything else is sold.

"When we first started, we fished from Monday morning until Saturday morning," said Olson. Over the years, new regulations have changed his fishing routine. He used to sit for six days and six nights in a boat.

Keeper of the fish

There are no hydroelectric power stations, or large quarries, or even logging projects that disturb the unique ecosystem of Alaska's Bristol Bay. The body of water lies west of Anchorage in the Bering Sea and is the world's largest wild salmon fishing area. 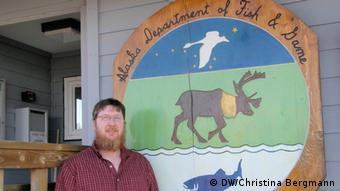 Every year, about 36 million sockeye salmon migrate back from the sea to their spawning ground by traveling in the nine rivers that flow into Bristol Bay. The area has no salmon farms.

Biologist Tim Sands works for the Department of Fish and Game in the Bristol Bay town of Dillingam and oversees activity in the west side of the bay. The department motto is "the fish come first." Sands said he wants to protect the salmon's natural habitat from overfishing.

"Fishing is illegal until we allow it," said Sands. Violators of the rule must pay a fine or, in more serious cases, the department confiscates their catch and boat.

Every year around mid-June, Tim Sands and his colleagues count the fish in the rivers that flow into Bristol Bay. They use the data to determine how many salmon have migrated and when fishing season can open. Part of their monitoring effort is also intended to protect the salmon, so they can lay eggs.

Sands and his colleagues analysed data going back to 1954 to determine that around 700,000 to 1.5 million sockeye salmon have to reach their spawning grounds for there to be enough offspring. 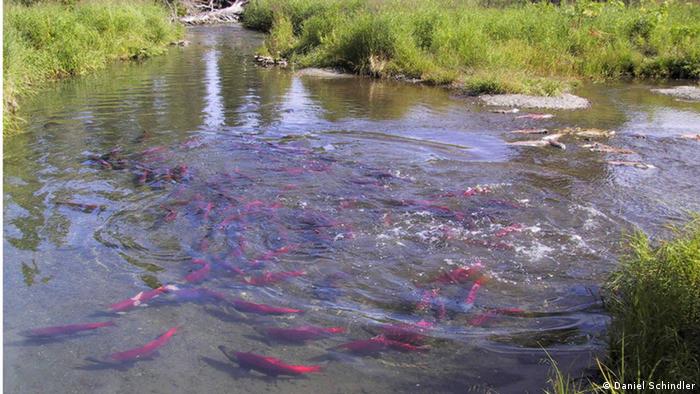 Despite the large number of fish, Sands and his co-workers said they can't simply let through the first million and open up fishing season, adding that it's important that diverse salmon populations reach their spawning grounds.

Salmon migration and breeding systems work in Bristol Bay because they've been left alone, according to Daniel Schindler, a biologist from the University of Washington who has studied the salmon in Bristol Bay for years.

Adding facilities to breed the fish in captivity would lead to a loss of genetic diversity and, "the systems become less stable, they boom one year and then immediately collapse the next," Schindler said.

He explained that keeping spaces for natural breeding is the best way to secure stability. At first, the number of offspring will be lower, but it climbs, he said. According to Schindler's calculations, in a natural breeding system there are fewer offspring four times every 100 years while in cultivated areas populations drops occur every three years. In other rivers in the United States these drops have led to the loss of entire fish populations.

A fish shortage would be a catastrophe for Dillingham, said city manager Daniel Forster.

"This community wouldn't exist without fishing," he said. About 2,500 people live in this small town that has one hospital, one harbor, a small University of Alaska campus, a few hotels, businesses, and a canning factory. 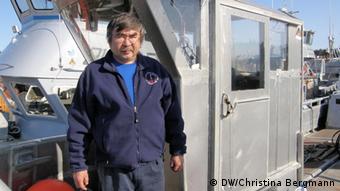 Tilden said he remembers promises made by the oil industry

Life in Bristol Bay is expensive because the towns have to rely on a high number of imported goods. The price of salmon had hit rock bottom about six years ago and life became more difficult for Dillingham, said Robin Samuelson, CEO of the Bristol Bay Economic Development Corporation. Then came the economic crisis and high unemployment in Bristol Bay's towns.

"Many fishermen in the small towns felt forced to sell one of the fishing licenses - of which there are only a limited number anyway - so that they could feed their families and pay for clothes and food for their children," Samuelson said.

Dillingham isn't rich, said Forster. About 70 percent of fishing profits benefit outsiders, not locals. The town's sewage system needs to be updated, and the waste disposal site and the bay need to be renovated.

The community recently passed its first fishing tax with the intention of benefiting the community. The tax is forecasted to yield $700,000 a year, or 10 percent of the annual budget. 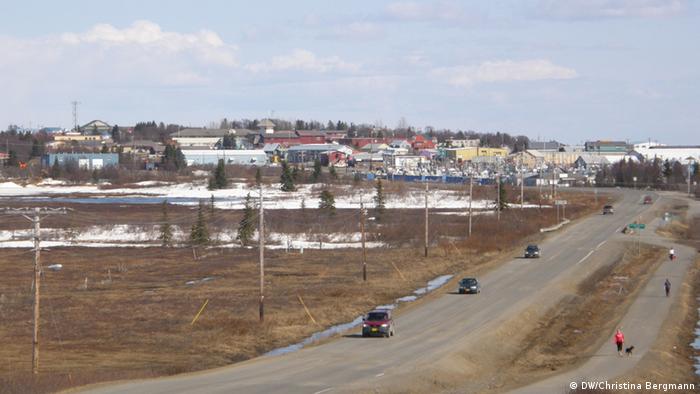 About 2,500 people live in the small town of Dillingham

Threat from Pebble Mine

While the gamekeepers continue protecting the salmon through strict regulations, another threat to the ecosystem has emerged. The residents of Dillingham see their existence as threatened by mining companies.

Two mining companies have plans to mine for copper and gold north of Bristol Bay, on one of the rivers heavily populated with fish. Pebble Mine has one world's largest sources of both of these metals.

Northern Dynasty bought the area in 2001. Four years later, they partnered with the company Anglo American. Plans to mine aboveground, underground, or a combination of both have been in the works ever since.

The preliminary stages for an application for a mining permit are in progress. The companies promised in their latest newsletter that they're, "convinced that Pebble can be developed in an environmentally friendly and socially responsible manner according to US and Alaskan standards." 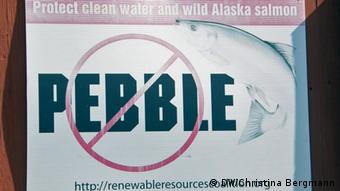 Much of Dillingham is opposed to the mine

But Dillingham natives are skeptical. Former mayor Tom Tilden remembers when they fought against offshore drilling in Bristol Bay in the 80s. The oil companies had promised people didn't need to worry. “The answer came in the worst possible way when the Exxon Valdez oil spill happened," he said.

In March 1989, the oil-tanker ran ashore in neighboring Prince William Sound. Some 11 million tons of oil flowed into the sea. An offshore-drilling moratorium was declared following the disaster. It also applied to Bristol Bay and is scheduled to expire in 2015.

Dillingham is officially against Pebble Mine, said city manager Forster, “even though the Pebble Mine companies offered us subsidies and other resources.”

Gamekeepers, fishermen, scientists are all united by the worry that the mines will irrevocably change the ecosystems. Detecting the harmful byproducts of the mine will be very difficult, according to Schindler.

Mining involves contaminative byproducts that would be stored in a reservoir which could leak. Earthquake prone areas, like Bristol Bay, have an even higher risk of reservoir leaks.

Many of the Bristol Bay residents have been protesting the mine in order to avoid any potential damage to their homes and have pointed out that should a mining accident occur, exemplary fishing management would no longer be of any use.

The US Environmental Protection Agency has provided a risk study and is currently holding hearings.