Al-Maliki: From popularity to political failure | Middle East | News and analysis of events in the Arab world | DW | 29.06.2014

Al-Maliki: From popularity to political failure

When he became Prime Minister of Iraq, Nouri al-Maliki was seen as someone capable of restoring peace in the country. But now Iraq is on the brink of civil war - a tragic disappointment to those who believed in him. 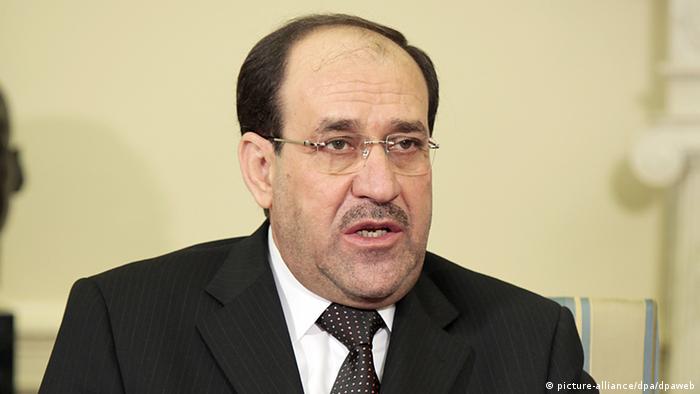 Eight and a half years ago, Iraq was close to civil war. Shiite and Sunni-operated death squads were murdering each other's people. Iraqi politicians were unable to respond; the government was collapsing and a new leader was urgently needed. After several months, Shiite, Sunni, and Kurdish representatives came to an agreement, appointing Nouri al-Maliki, a Shiite, as head of government. He was seen as a beacon of hope, a pragmatic personality who could bring peace back to the war-torn country.

Born into a family of intellectuals on July 1, 1950, in a small town south of the Iraqi city of Karbala, al-Maliki experienced discrimination in his early political career. At the age of 18 he joined the Islamic Dawa Party, which advocated Shiite rights. It stood in opposition to the Sunni-dominated Ba'ath regime, which dictator Saddam Hussein also later belonged to. Al-Maliki fled the country when Hussein came to power in 1979 and ruthlessly suppressed opposition parties. Al-Maliki was sentenced to death in exile by Iraqi authorities in 1980. 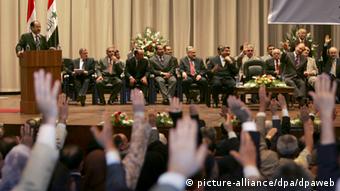 When al-Maliki came to power in 2006, he inspired hope and optimism

He lived in exile for over 20 years, mostly in Syria and Iran. After Hussein's regime was brought down by US-led occupying forces in 2003, al-Maliki returned to his homeland and became deputy head of the Supreme National Debaathification Commission, whose mission was to purge former Ba'ath Party officials from the military and government. Following the first parliamentary elections in January 2005 he became head of the security and defense committee. A year later he became prime minister.

When he took office, al-Maliki presented himself as an optimist. He and his ministers hoped "that this government can successfully lead Iraq out of its unusual and difficult situation." The new government was officially interdenominational and declared that the prime minister had no right to exploit his ministers based on their ethnic or religious background because they were not his property.

A 24-point plan for national reconciliation and dialogue was drawn up to stabilize the country, integrate Sunnis and stop Shiite militias. At first the policy worked and violence in the country declined with the support of the US, but then it started rising again.

In the 2010 parliamentary elections, al-Maliki's State of Law Coalition lost by a few percentage points to the al-Iraqiya List, an alliance established by Ayad Allawi, interim prime minister from 2004 to 2005. But al-Maliki refused to surrender, and after a nine-month power vacuum managed to build a government that he was head of.

At the same time, al-Maliki increasingly resembled an autocrat. He filled key posts with fellow party members and took over several ministries himself. Officially the government was made up of Shiites, Sunnis, and Kurds, but Sunni representatives were gradually deprived of power. 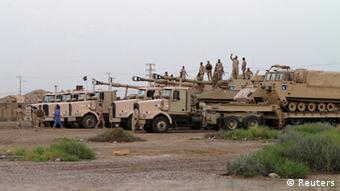 Al-Maliki's troops are facing ISIS insurgents, who have seized control of parts of Iraq

Following US withdrawal from Iraq in 2011, al-Maliki used force against demonstrators who demanded reforms. He described peaceful protesters as "enemies of freedom" and "terrorists." Vice President Tariq al-Hashimi, a Sunni, was forced to flee the country after terrorism charges were raised against him. And following an April 2013 massacre in the town of Haweeja, near Kirkuk, where over 40 people were killed, alleged Sunni terrorists were executed without any names or case details being made public.

The oppression of Sunnis and the sectarian struggle between Sunnis and Shiites has aided the rapid advance of the jihadist group Islamic State in Iraq and Syria (ISIS). Its militants have seized large parts of northern and western Iraq since launching their brutal operation in January. In June they captured the city of Mosul with the plan to take control of Baghdad next.

Now al-Maliki is responding with a military offensive. He appears to be under pressure, and is complaining of conspiracies and "false leads" over ISIS. The US has called on al-Maliki to build a united government with genuine Sunni representation - something he himself officially planned to do when taking office in 2006.

Ex-US ambassador: 'Iraq needs a Mandela or a Havel'

Iraqi Premier al-Maliki is not suited to overcome the deep ethnic and religious rifts in Iraq, America’s former Iraq ambassador Jim Jeffrey tells DW. He also explains why the crisis reminds him of the Thirty Years War. (27.06.2014)

Iraqi forces are building up around the northern city of Tikrit in preparation for a large-scale operation to retake the city from Sunni rebels. Helicopter gunships have already carried out airstrikes. (28.06.2014)