The German state of Rhineland-Palatinate is preparing a legal challenge aimed at overturning the federal government's new air passenger levy after Ryanair announces it will reduce services to and from Frankfurt-Hahn. 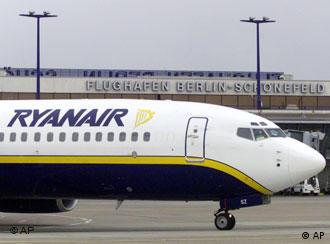 The German state of Rhineland-Palatinate is preparing to sue the federal government over its plans to introduce a new tax on air passengers starting next year.

Rhineland-Palatinate is home to Frankfurt-Hahn airport – a major regional hub for budget airlines. One of them, Ryanair, has already announced the levy would force it to cancel services and downsize its local fleet of aircraft next year.

Rhineland-Palatinate economics minister Hendrik Hering told the Handelsblatt business daily he was determined to sue because the levy would "clearly harm the regional economy".

Hering said independent evaluations commissioned by the state government showed that while the levy would generate one billion euros in revenue, its knock-on effects would ultimately burn a 500-million-euro hole in the public purse.

Ryanair announced on Wednesday that it would cancel nine routes from Frankfurt-Hahn airport beginning next summer as a direct result of the tax.

The number of flights flying from Hahn will fall roughly 30 percent from 532 per week to 382, the Irish low-cost carrier said on Wednesday. The cancellation of services to cities including Seville, Danzig, Prague and Gothenburg would see the airline reduce its Frankfurt-Hahn-based fleet from 11 aircraft to eight.

"As a business, we have to look at those flights which are profitable for us," Henrike Schmidt, a spokeswoman for Ryanair, told Deutsche Welle. "We have cut routes that we think are traveled mostly by passengers who will not want to pay this new surcharge."

Ryanair said it had a million passengers who are not willing to pay eight euros more per ticket - the amount to be levied on short-haul flights. The new air passenger tax, which goes into effect on January 1, will impose a charge of 45 euros on long-haul passengers and 25 euros on medium-haul flights.

The controversial tax, or "ecological air travel levy," was included in a package of public spending cuts introduced by Chancellor Angela Merkel earlier this year.

The government has said it needs to slash spending by 80 billion euros ($101.5 billion) by 2014 to stabilize the country's economy. 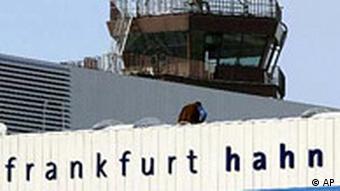 Frankfurt-Hahn airport is a major regional hub for budget airlines

But the tax has been slammed by airlines and industry groups, who say it will cost jobs, hurt the tourist industry and encourage international passengers to bypass Germany completely. In 2009, there were 182 million air passengers in Germany.

"We think it could cost the country 16,000 jobs and Germany could lose up to five million passengers," Carola Scheffler of the German airline group BDF told Deutsche Welle.

"It also will result in more auto traffic, so we don't think it has much to do with environmental protection, even though it has been couched in those terms," she added.

Other airlines have slammed the tax plan. Lufthansa has said its "global connections" will take a hit because passengers will look to avoid transferring at German hubs to bypass the fee. Air Berlin CEO Joachim Hunold told Reuters that "if a four-member family has to pay 120 euros more for a holiday in Egypt, then the little man is being burdened again."

"Most German airlines have spoken out against this tax," said Ryanair's Schmidt. "It's going to result in further reductions in routes, especially domestic German routes."

Berlin has dismissed the criticism, saying it is overblown. This summer, Michael Offer, a spokesman for Germany's finance ministry, rejected the numbers cited about job losses, saying: "We do not understand where these figures come from and they do not correspond to what we foresee."

Airlines "should not suffer large losses" from the tax, which is expected to be passed on to passengers, Offer added.

A similar airline passenger tax exists in Ireland, Belgium and the UK. The Netherlands and Denmark both tried similar taxes but dropped them after seeing travelers bypass their airports in favor of lower-cost alternatives in neighboring countries.

Hartmut Fricke, director the Institute of Logistics and Aviation at the Technical University of Dresden, agreed with Ryanair that the profit margins for tickets on short-haul flights are extremely narrow, but he told Deutsche Welle he doubted that an 8 euro surcharge would lead to a drastic fall in passenger volumes.

He said one aspect of the tax is to encourage people to take the train or less-polluting forms of transportation instead of hopping on a plane.

"But whether it will really contribute to the environmental goals of this government, well, I'm pretty skeptical," he said.

German airlines will have to pay up to 26 euros per passenger, according to a government bill taxing air travel. Lufthansa and Air Berlin say the charges will just push passengers abroad. (15.07.2010)

Ryanair sets its sights on Germany as part of expansion plans

One of Europe’s leading low-cost airlines is shifting its focus away from its home base of Ireland to Europe, in an effort to save money and increase passenger numbers. The plan includes a renewed focus on Germany. (09.02.2010)

Irish budget airline Ryanair has said it is considering a “fat tax” for overweight passengers. It says that's what its passengers want. (22.04.2009)

The emergence of the omicron variant has slowed air travel on an already weak winter demand, leaving some carriers to experience nearly empty flights. Some EU airlines are hoping for relief from the European Commission.