Investors in Germany's second-largest carrier, Air Berlin, are meeting in London to debate ways out of a deep financial crisis the airline has grappled with in recent years. Can the troubled company really be rescued? 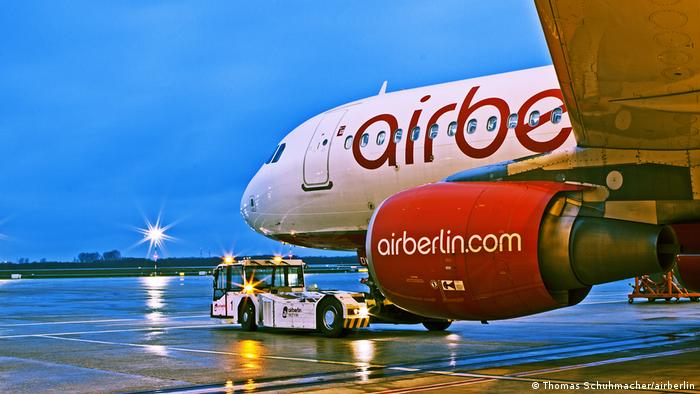 German carrier Air Berlin booked losses amounting to 1.2 billion euros ($1.3 billion) for the past two years. Only once since 2008 had it booked an annual net profit.

Lately the troubled company has been kept afloat by cash injections from United Arab Emirates airline Etihad, which owns a 29.2-percent stake in Germany's second-largest carrier.

Air Berlin presented a restructuring plan last September that included renting 38 aircraft with crew to Lufthansa and slashing 1,200 jobs, or one in seven of its workforce of roughly 8,000.

But last week TUI informed its employees of the collapse of joint venture talks, saying only that Etihad had decided not to continue negotiations on the subject.

The state to the rescue?

Shortly before holding Wednesday's annual general meeting in London, Air Berlin had requested public guarantees in the hope the German taxpayer would be willing to ensure the repayment of loans, should the airline no longer be in a position to meet its financial obligations.

Air Berlin CEO Thomas Winkelmann told shareholders in London that the liquidity of the company must not be called into question, pointing to the letter of support it had received from Etihad, guanrateeing it 18 more months of financial help. Winkelmann said the move to ask for state guarantees was part of the firm's long-time strategy, which he added involved "being prepared for extra measures when the need arises."

In an interview for "Die Welt" newspaper, Achim Wambach said what was needed were opportunities in a market economy for new companies to get into the market. "If a company does poorly, or its business model doesn't work, then the state should not keep it alive artificially," he argued.

He was also quite critical of any talk of Air Berlin being taken over by Lufthansa, Germany's flagship carrier.

Wambach said such a merger would definitely raise competition concerns since the two airlines were the primary competitors on many routes, especially to and from Berlin.

"If there is only one provider on certain routes, it would naturally have an effect on prices," he said.