The rescue operation to save a mainstay of several generations of German shoppers has succeeded, at least for now. 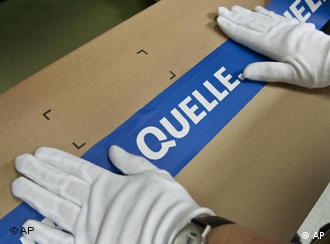 After days of talks with bankers, German catalog and internet retailer Quelle has received some 50 million euros of government-guaranteed private money, allowing it to pay its bills and continue operating.

The mail-order retailer, based in the Bavarian city of Fuerth, made a key deadline in securing the cash. It could no longer pay its shipping charges and had fallen behind on its bills to complete its print run, meaning it would have had to scrap plans to mail out its main fall/winter calendar had the money not come through.

Quelle, which has been in operation since 1927 and has offered thousands of items from sweaters to hair dryers to Germans via catalog for more than 50 years, reported that the money will allow the company to return to business as usual by the middle of the coming week.

Essen-based Valvois bank, along with at least two others - the State Bank of Bavaria and Frankfurt's Commerzbank - are involved in the new round of financing.

Bavaria and another German state, Saxony, along with the federal government, had combined late last month to pledge loan guarantees of up to 50 million euros to help keep Quelle afloat, in hopes that this would help attract private capital.

The move by the government to step in and help Quelle was not popular with everyone. Competitors in the mail-order sector cried foul, and some in the public wondered why Quelle received state funds when other crippled retailers did not.

The European Commission has approved a German state aid deal to help keep afloat struggling mail-order company Quelle. However, operations at the Fuerth-based firm will only be secured until the end of the year. (30.06.2009)

Decision looms over the future of mail-order group Quelle

A decision on the future of struggling mail-order company Quelle is expected Monday evening. The German company is on the brink of collapse and has said it urgently needs government aid to stay in business. (29.06.2009)

With debts of more than $50bn owed to foreign creditors, Sri Lanka is on the brink of bankruptcy and facing its worst economic crisis since independence. The country is fast running out of gasoline and medicine.

Amid protests and a massive economic crisis in Sri Lanka, the country's Prime Minister Ranil Wickremesinghe proposed to give the youth more power and make the president "accountable" to the parliament.