AIDS experts urge rich countries not to renege on funding promises | Europe | News and current affairs from around the continent | DW | 18.07.2010

Against the backdrop of protesters demanding better access to AIDS drugs, experts worry that governments will use the global financial crisis as an excuse to break their word on their commitments to battling the disease. 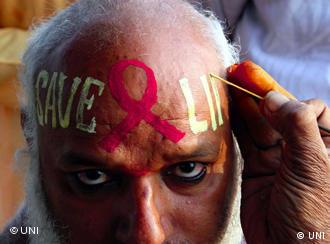 There are 33.4 million people living with HIV worldwide

The head of the world's largest backer of programs against HIV and AIDS told a global conference on AIDS that he fears wealthy countries may cut funding in the wake of the global recession.

Speaking at the international gathering of some 20,000 AIDS activists, scientists and sufferers in Vienna on Sunday, Michel Kazatchkine, head of the Global Fund to Fight AIDS, Tuberculosis and Malaria, said it needed up to $20 billion (15.5 billion euros) in the next three years to sustain progress.

Kazatchkine said he was "afraid" and "concerned" that wealthy countries would cut development aid "because of competing priorities."

As he spoke, hundreds of protestors marched through the conference centre demanding that rich nations deliver on their promise that all those in need of AIDS drugs should get them. The protestors were waving placards and shouting "broken promises kill," briefly delaying the ceremonial start to the 18th International AIDS Conference. 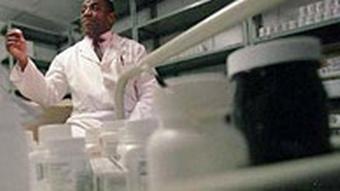 The head of the International AIDS Society, and conference chairman, Julio Montaner rebuked politicians for failing to deliver on their promise, saying that only a third of the 15 million people who need potentially life-saving AIDS drugs currently get them.

"We have treatments that work, we have shown that this can be done ... what we need now is the political will to go the extra mile to deliver on universal access," he said. "We have a serious problem with the political leadership globally and we have to fix it."

In a brief video message at the start of the six-day forum, UN Secretary-General Ban Ki-moon urged countries to stick to their commitments on AIDS.

"Some governments are cutting back on their response to AIDS," he said. "This should be a cause for great concern to us all."

A report published at the conference by the Joint United Nations Program on HIV/AIDS (UNAIDS) found that overall support for the global AIDS effort from donor nations flattened out last year in the midst of the global economic crisis.

In 2009, the Group of Eight leading wealthy nations, the European Commission and other donor governments provided $7.6 billion for AIDS relief in developing nations, compared with $7.7 billion in 2008, the report said. 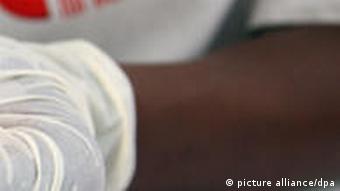 Financial support for HIV/AID flattened over the last year

Montaner also criticized governments in eastern Europe and Central Asia for not recognizing the risk posed by HIV/AIDS and not sending representatives to the conference. He accused them of "irresponsibility to the point of criminal negligence."

The conference will focus on the rising numbers of infections in eastern Europe and on the human rights of infected people.

Worldwide, there were some 33.4 million people living with HIV in 2008. Sub-Saharan Africa, home to 67 percent of all people with the AIDS virus, is the most affected region. In Europe, Ukraine has the highest rate of HIV infection, at 1.6 percent.

Community project fights to stamp out HIV in South Africa

An estimated 70,000 babies are born each year in South Africa infected with HIV, adding to the 7.5 million people suffering from the disease. A group of community activists is fighting to bring that number down. (17.06.2010)

World AIDS Day a reminder that the fight is not over

Living with HIV/AIDS is now often possible thanks to drug therapies, but prevention and coping with discrimination remain hurdles to overcome. (01.12.2009)