Johannes Heesters, the 104-year-old cabaret performer who was once a favorite of Hitler, returned to his Dutch hometown for the first time in four decades to perform. The concert brought both applause and protests. 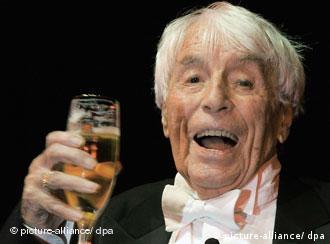 Heesters is a controversial figure in the Netherlands because of his cozy relationship with the Nazi occupiers. Security was tight at the De Flint theater in Heester's hometown of Amersfoort, where he put on a concert for the first time since 1963 on Saturday, Feb. 16. 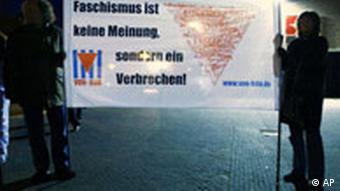 Protestors equate the singer with fascism

Police said several dozen protesters as well as a few neo-Nazis showed up outside the concert hall, but the performance went on undisturbed. The last time Heesters tried to peform in the Netherlands, he was booed off the stage by the audience, who stood up and gave Nazi salutes.

Heesters was born in Amersfoort, a town 50 kilometers (35 miles) east of Amsterdam in 1903. Yet he made his fortune in Germany. The artist is revered by generations of Germans for his operettas and film performances.

One of Hitler's "divinely gifted" artists

Heesters has been a popular German-language singer since the 1930s, becoming a favorite of the Nazis and one of the "divinely gifted" artists who took part in performances to boost the morale of soldiers during the war. Heesters claims he did not know what was happening to Jews during the war despite visiting the Dachau concentration camp in 1941.

"Honestly, I was too busy working," Heesters said in an interview after a TV gala celebrating his 100th birthday in 2003. "I couldn't do anything about politics." 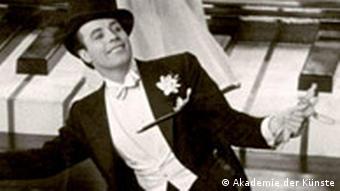 Heesters is considered a musical legend in Germany

While Germans have taken Heesters at his word and continue to watch his old films such as "Always You" and "Illusion," many of his Dutch countrymen have never forgiven him for his acceptance of the Nazi regime during World War II. After the Nazi defeat, Heesters continued his career in Germany, settling in Bavaria.

Heesters is considered to be the oldest living performer. At the concert Saturday, Heesters performed hits such as "The Merry Widow" and "There by the Windmill" despite breaking several ribs on Jan. 1 during a fall. At the concert he occasionally needed help from his wife to remember the lines, but otherwise sang with a steady voice, according to media reports.

Those charged with protecting Anne Frank's legacy are divided on a new Spanish musical that tells her tragic story. The director says it'll reach young people better than a dry exhibit or book. (01.02.2008)

Adolf Hitler's music collection included some surprise choices: Russian and Jewish musicians considered "subhuman" by the Nazis. A woman found the music in her family's summer home near Moscow. (06.08.2007)

The Nazis compiled a secret list of “divinely gifted” artists, who received favorable treatment in return for entertaining the masses. The list included Dutch-born actor Johannes Heesters, who turned 100 in 2003. (06.12.2003)

Should artists who enjoyed success during the Nazi regime be considered collaborators? Please include your name and country in your reply.