As Volkswagen scrambles to salvage its image in the wake of the emissions scandal, car buyers in Germany are rallying behind the country's biggest automaker, as DW reporter Peter Dahl has found out in Berlin. 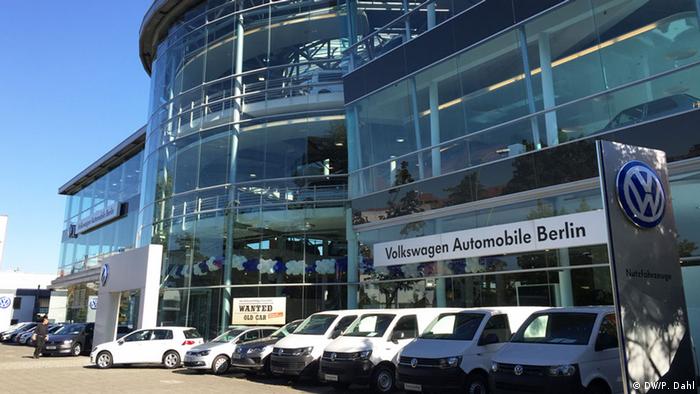 A garland of blue and white balloons floats cheerfully behind the towering glass front of one of Berlin's biggest VW dealerships. But Volkswagen has little reason to celebrate these days.

It's been two weeks since US regulators uncovered one of the biggest scams in recent auto industry history. At the scandal's center, the German auto giant's brazen attempt to cheat on emissions tests by rigging the software of up to 11 million diesel vehicles.

The aftershock has prompted a scramble to prepare the company's death bed. The admission of guilt, some analysts claim, sounded the death knell for one of Europe's most iconic carmakers. 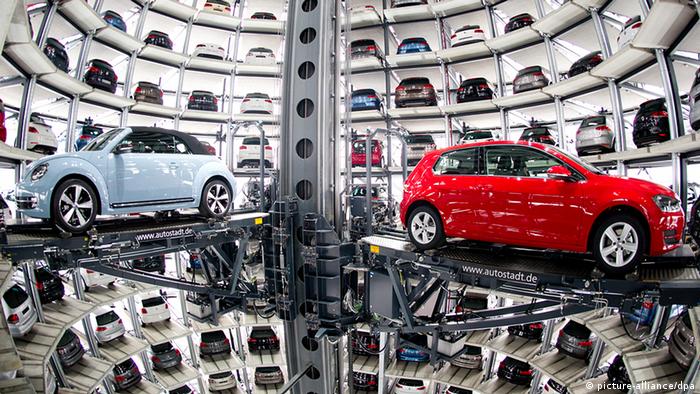 In spite of their tarnished image, Volkswagen cars have remained popular in Germany, especially its newest models.

But while some disgruntled buyers outside Germany are already practicing their dancing steps for Volkswagen's wake, many people here in the nation's capital are rooting for the company to bounce back.

One of them is 48-year-old Michael, a spitfire Berliner, who runs his own cleaning business. Like many Germans, he's convinced the outrage is little more than political theater.

"Regular consumers don't care about a few extra milligrams of emissions. All they care about is getting the most bang for their buck. And when it comes to that, VW can't be beat," he told DW as he nonchalantly finished his cigarette outside the dealership. "In six months, this will all have blown over."

As his hand slowly caressed the hood of a shining new white VW van - a move that, fittingly, had also become ex-CEO Martin Winterkorn hallmark, embodying his attention to detail - Michael echoed a phrase that's become increasingly popular in some corners of the country:

"They all cheat. Volkswagen was just stupid enough to get caught."

To him, it's no surprise that it was the US that went after the German carmaker.

"Germany is the US' biggest economic competitor. Of course they're trying to ruin us. What gets me the most is the irony: That the world's leading polluter - a country where even dog houses have heaters - now wants to lecture us on environmentalism."

With the flick of a finger he sent his cigarette flying and strode towards the entrance. "I've always bought German cars," he said. "This time, it's going to be a VW Caddy. A diesel," he grinned, as he disappeared behind the balloons.

Inside, a young salesman said business has been steady despite the scandal. "We do get a bit more wisecracks than usual, but at least no one's throwing rocks through our windows."

In Wolfsburg, home of Volkswagen, many aren't so lucky. Several have complained about being assaulted on their way to the factory. For a company where many employees hail from generations of proud VW workers and several have their company ID number inked on their bodies, this is personal.

And so it is for many around the country. To hear some Germans talk about their Volkswagen is like hearing them describe an extra member of the family: The warm memories, the fuzzy feelings, the ups and the downs. Ask them to chose between the family pup and the Passat, and the answer might surprise you.

Two weeks on, many Germans are still shocked. Many refuse to talk when asked for a comment. Even across the street from the VW dealership in Berlin, a Jeep saleswoman tells me she's been given strict orders not to discuss the scandal. Similar reactions around the corner, where Daimler, Infiniti and Maserati stores rub shoulders.

But the initial paralysis also seems to have given way to a new sense of urgency, of wanting to stand up for one of the country's proudest exports.

Sebastian Lorenz, Vice President of Marketing and Analytics at Autoscout24.de, one of Europe's biggest online markets for new and used cars, says the emissions scandal has not affected sales in the slightest.

"We haven't seen a drop in demand for VW diesel vehicles - new or old - nor have prices gone down since the emissions scandal," said Lorenz in a statement.

'Just pick something else'

If the Audi branch across the street is any indication, that's unlikely to change. The VW Group brand has also made headlines recently for its tainted diesel cars. But that doesn't seem to bother any of the customers inside, where business is teeming.

"No one cares about emissions," one soon-to-be-owner told me as he checks out a 2-liter TDI Q3 S line in glacier white, starting at over 32,000 euros ($35,800). "Maybe the industry and the regulators care about that stuff, but all I care about is performance."

A gentleman in his mid-50s chimed in: "There are so many different models. If you don't like the diesel, just pick something else."

The group has announced plans to recall more than 10 million vehicles across five different brands. In another effort to contain the damage of its emissions scandal, Volkswagen has agreed to reimburse Spain's government. (29.09.2015)

Despite the harsh criticism threatening Volkswagen in Europe and America, DW columnist Zhang Danhong, in an open letter to VW, expresses confidence that Chinese car buyers will stay loyal to the brand. (01.10.2015)

The research team that caught Volkswagen

The leader of the research team that caught Volkswagen's cheating on US pollution tests tells DW how real-world emissions differed from lab results. Daniel Carder explains why the tests' outcome surprised researchers. (25.09.2015)