#afrogermany - How white is Germany?

"I'm a Black man in a white world," sang Michael Kiwanuka. This multimedia project gives people of color in Germany a platform and seeks to raise awareness for the subtle, everyday racism that still impacts our society. 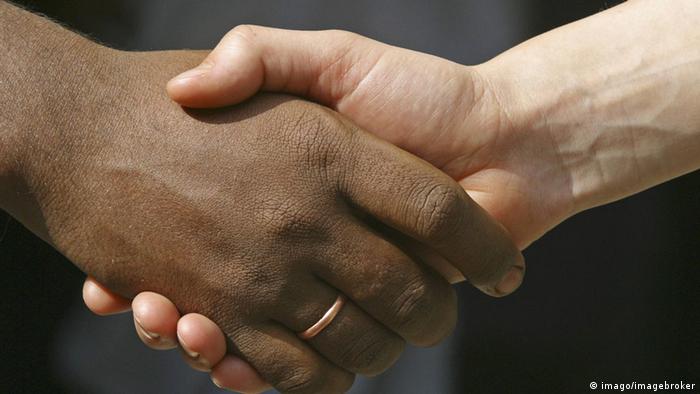 "It's so tolerant of you to be close friends with Black people." When an acquaintance of mine said that about a friend, I was flabbergasted. And I just wanted to disappear when a distant relative of mine continuously touched my friend's arm just to see what dark skin feels like.

When we visited a restaurant in a small town, my friend got stared at the entire evening. That's when I started to feel ashamed about the behavior of some white people, and to give some serious thought about what it would feel like if I weren't born with white, but with darker skin. What would it be like if my skin color were a constant issue?

"I'm a black man in a white world." That's how soul singer Michael Kiwanuka sums it all up. The western world is dominated by whites, and we whites aren't even aware of that. We have suppressed memories of colonialism, which poisoned relations between white and people of color for a long time. German colonialism only plays a limited role in our school syllabuses, even though colonialism helped paved the way for National Socialism in a fatal and cynical way.

Colonialist clichés continue to poison the social climate even now, during the so-called refugee crisis. Nowadays, people of color living in Germany - Afro-Germans, refugees, or just people who look different - are facing even greater resentment, hostility, and sometimes even violence.

With our multimedia project "Afro.Germany," headed by Susanne Lenz-Gleissner and Rolf Rische, we want to depict and question everyday racism - which can often be quite subtle. Only people of color come up in our documentary film "Afro.Germany," directed by Jana Pareigis, Susanne Lenz-Gleißner and Adama Ulrich. They tell our Afro-German journalist Jana Pareigis about their experiences in Germany - their homeland or adopted country.

Our website dw.com/afrogermany, edited by Gaby Reucher and Susanne Lenz-Gleissner explores historical, cultural and social phenomena connected to racism. Among the topics are what the Nazis termed "Völkerschau" (human zoos) the initiative "School Without Racism" supported by Ghanaian-born former German national soccer player Gerald Asamoah, as well as the struggle for politically correct speech.

We look forward to your feedback on Twitter with the hashtag#afrodeutschland.