Africans in China experience social, not language problems | World| Breaking news and perspectives from around the globe | DW | 19.07.2009

After the death of a Nigerian businessman outside a police station in China, more than 100 Africans took to the streets. The case highlights the problems faced by a growing number of African immigrants in China. 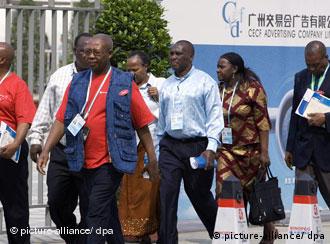 The demonstrators gathered for hours outside a police station in China's Guangzhou city after a Nigerian man fell to his death trying to escape from a visa check on Wednesday. According to Chinese media reports, the Nigerian businessman had overstayed his visa.

Officially, some 20,000 Africans live in China, mostly traders and students. But unofficial estimates suggest that 20,000 might be living in the southern city of Guangzhou alone, most of them from Nigeria.

"Basically, they are middlemen", explains Alexander Demissie, an Ethiopian who is researching African-Chinese relations at Bochum University in Germany.

They make the connections between Chinese manufacturers and the African traders.

"Most of the time, these Nigerians living in Guangzhou are highly educated persons who speak very good Chinese, because they studied at the universities." With their knowledge of the local language and culture they are important for many African traders who come to China only for a few weeks at a time in order to buy goods, says Demissie.

Since China is very interested in promoting trade and political relations with African countries, getting a visa is usually not a problem for people who can prove that they are either students or traders. That's why the death of the Nigerian businessman trying to escape a visa check is an incident that shouldn't really occur, argues Demissie. Still, he adds, Chinese police are often rough with African immigrants. "Africans do face harsher controls inside China than in other countries." 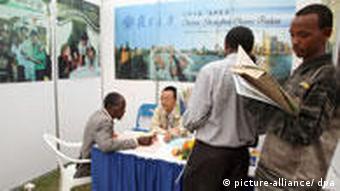 China is promoting its universities to African students

But He Wenping, an Africa specialist at the Chinese Academy of Social Sciences in Beijing, finds that many Africans are better integrated in China than Westerners. "I've come across so many people who speak perfectly fluent Chinese. And they find it easier to master the different tones we have in our Chinese pronunciation than the Europeans or Americans. They easily adapt to the local environment in the Chinese cities, and Chinese food is no problem for them."

But Alexander Demissie, who has lived in China, says other issues can create difficulties: "From my own experience, it's not easy as an African to have a Chinese girlfriend, for example." It is not looked upon positively by people, says Demissie. "And that's one cause of problems in China. And why people act rudely or badly towards Africans."

What's more, he says, there are also occasional street fights between groups of Africans and Chinese and he perceives a general lack of knowledge about Africa among ordinary Chinese. His hope as well as that of other Africans in China is that with growing exposure through trade and political links, these problems will cease to exist in the future.

The World Economic Forum opened in South Africa on Wednesday with a host of business and political leaders trying to assess Africa's challenges and opportunities. (09.06.2009)