Africa fears loss of Libyan investment | World | Breaking news and perspectives from around the globe | DW | 24.03.2011

As part of his pan-African vision, Libyan leader Moammar Gadhafi has invested heavily in businesses and projects across the continent. But as upheaval rages in the country, the future of those investments is uncertain. 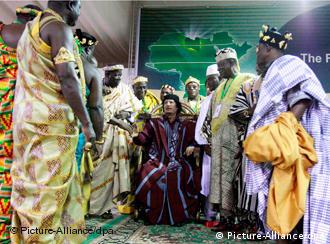 His name is scattered across the continent: a Gadhafi street here, a Gadhafi mosque there, several Gadhafi high-rises. Many African nations have named buildings and infrastructure projects after the long-time Libyan leader and the frequency with which the Gadhafi name appears underscores the powerful influence he still has over large swaths of the continent.

The African Development Bank reports that Libya now has about 260 million euros ($370 million) in its account there. Libya is one of the bank's leading regional shareholders and one of the biggest contributors to the 53-nation African Union.

"Libya is one of our bank's most important investors," said Emanuele Santi, the bank's country economist for Libya. "I don't think that Libya is going to pull his money out."

He said the Libyan leader has always shown great solidarity with Africa and done much to help other nations, which is why the bank had no intention at present of putting a freeze on his assets, like many western countries and institutions have done.

Observers estimate that Libya has invested a total of about six billion euros in other African countries. The investments range from large to small, from schools and hotels military arms to a saw mill, poultry farm and gasoline distributor. The countries where Libya has invested cover the entire continent, from Chad and Mali in the north down through Togo and Kenya to Zambia and South Africa. 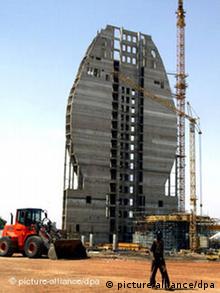 The Tower of the Great Opening hotel in Khartoum, built with Libyan money

Many companies and major projects are still waiting impatiently for new capital infusions from the oil-rich North African state. But due to the fierce fighting there and the uncertainty about the future of the Gadhafi regime, an arrival of fresh cash in the near future is doubtful.

Libya owns two-thirds of troubled mobile phone operator Uganda Telecom, which is struggling under a debt load of some 10 million euros and its very survival looks to be at risk should no new Libyan funds be forthcoming.

According to Helmut Asche, director of the University of Leipzig's Institute of African Studies, other African companies could soon find themselves in similar straits.

The $5-billion Libya Arab Africa Investment Portfolio has been a major presence on the continent and under its telecom arm, LAP Green, it has become a major presence in Zambia, Uganda, Niger and the Ivory Coast.

"If there are expectations that the Libyan government and their investment arms inject new capital into these companies, there is going to be a problem," Asche said.

Libya also has important investments in other parts of the world, including Europe, which has made EU leaders uncomfortable in the wake of the violence. Earlier this month, the EU expanded its sanctions to include the Libyan Investment Authority (LIA), also known as the Libyan Arab Foreign Investment Company. 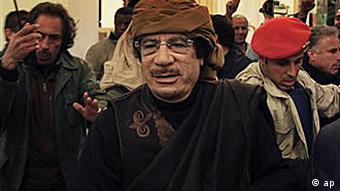 Gadhafi has let his wallet speak in Africa

The $70 billion sovereign wealth fund is the overseas vehicle for investing Tripoli's oil revenue and is a potential source of funding for the regime.

The fund has investments in a range of assets from agriculture to real estate, financial firms, oil and gas and stocks and bonds. Among the fund's highest-profile investments is a 7.5 percent stake in Italian football club Juventus.

This week, the EU agreed on a new series of sanctions, its third, against Gadhafi's regime which target individuals and financial entities, such as investment companies, foundations, banks and other state groups.

A fourth set of sanctions is due to be discussed in Brussels next week.

Gratitude to the dictator

While European governments have been fairly decisive about curtailing their economic relationships with the North African state, African leaders have been more reluctant. Largely, observers say, because Libya has been very generous to its less-well-off neighbors.

Gadhafi, who was crowned the "king of kings" by African kings and traditional leaders in the now rebel-held town of Benghazi in 2008, promised just last year to invest another 60 billion euros in the African economy.

One of the primary beneficiaries of this money has been the West African country of Burkina Faso, where Gadhafi's funds have been used to expand the nation's infrastructure and build a new medical clinic.

In Khartoum an upscale hotel was partially financed by Libya

The Burkina Faso government has traditionally had close ties to the Libyan leader and even the head of the country's opposition, Hama Arba Diallo, sees little about the relationship to criticize.

"Moammar Gadhafi has gladly helped us make the kind of large-scale investments that our government alone could not have done," he said. Despite the current conflict and the wide-spread criticism of Gadhafi in the wake of violence unleashed against Libya rebels, Arba Diallo believes no one in his country should be ungrateful to the north African leader.

With this kind of cross-party unanimity of opinion and the economic dependence of numerous countries and governments on Libyan largesse, it is little wonder that African criticism of Gadhafi has been muted.

Some African countries have implemented a UN resolution calling for member states to freeze Libya's assets.

South Africa was the first to do so and this week, Zambia's finance minister told the country's parliament that the government's share in a telecommunications company and other investments would be frozen.

According to analyst Asche, African countries would do well to wean themselves from their reliance on Libya's millions. Whether in the wake of the current upheaval, Gadhafi's pan-Africanism and his economic generosity remain intact is "more than questionable," he said.

While Colonel Moammar Gadhafi continues to hang onto power in Libya, the United Nations and the European Union hope to choke him into submission through sanctions. But Gadhafi still has income sources in Germany. (10.03.2011)

The EU finds itself presented with an opportunity to lead in helping a number of Arab states move toward democracy, but stubborn dictators who cling to power may expose the frailties of the EU's common foreign policy. (22.02.2011)

A recent spat between conservatives and reformers in Libya has left leader Colonel Moammar Gadhafi sitting on a fence between his government and his son, who is assembling a tribal coalition behind his reform movement. (30.11.2010)