AfD in spotlight ahead of key state election

The right-wing party's national spokesman has said they would have no problem siding with ultra-nationalists in parliament. His statement comes as the AfD poll numbers surge ahead of regional elections. 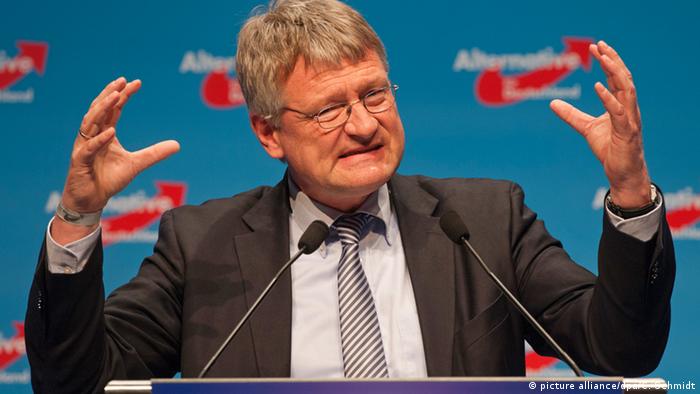 The federal spokesman for the populist Alternative for Germany (AfD) party ruffled feathers on Wednesday by saying if his party enters a new regional parliament after upcoming elections, it would have no qualms siding with the extreme right National Democratic Party (NPD) on some issues.

Speaking with the Mannheimer Morgen newspaper, Meuthen said: "If the NPD makes sensible suggestions, we wouldn't vote against them, just as we wouldn't if the suggestions came from the Left Party."

While the AfD has shown its increasing indifference to courting controversy - adding a stance against Islam to its first party manifesto in April, for just one example - to hint at any sort of alliance with the NPD is particularly taboo within mainstream politics in Germany. The NPD is currently under investigation, and threat of being banned, by the country's high court for allegedly breaking Germany's strict laws against the use of Third Reich symbolism and rhetoric.

"The AfD is now officially fraternizing with the neo-Nazis of the NPD in order to form some sort of brown coalition," said Federal Minister of Family Affairs Manuela Schwesig, referring to the color of the Nazi uniforms.

Since its formation in 2013, the AfD has increased both its popularity and its presence in regional parliaments since turning away from its euroskeptic foundations to a more nationalist, anti-migrant stance - much to the chagrin of mainstream parties.

The AfD has also been the target of public ire, and in recent months, scattered acts of violence. Most recently, Meuthen himself had a cake thrown at him while attending a political event in Lower Saxony on Monday. The following day, an AfD leader in Rhineland-Palatinate was allegedly assaulted on the street, though the motive behind the beating is unknown.

On Sunday, the northern state of Mecklenburg-West Pomerania will hold regional elections. It is currently the only state where the NPD is still represented in parliament. While it is questionable whether they will once again make it over the 5-percent mark needed to gain seats in the legislature on Sunday, polls indicate that the AfD won't have any problem. They are projected to garner around 23 percent of the vote.

Indeed, the NPD most likely has the AfD to blame for their eroding voter base, as the latter are seen as a more legitimate face for supporters of a more nationalist approach to politics. The NPD had previously held seats in Saxony's state parliament, but didn't make the cut two years ago - the year the AfD first did.

Sigmar Gabriel has drawn criticism for his recent comments about Angela Merkel's refugee policies. In an interview on Saturday, the vice chancellor called Merkel's policies "inconceivable." (29.08.2016)

The mayor of Berlin has warned that Germany's populist right AfD party could expand its reach in the capital in upcoming local elections. The anti-immigrant party has enjoyed a surge in support during the refugee crisis. (21.08.2016)