South Korean coastguards and navy divers are scrambling to search for nearly 280 people missing after a ferry's sudden capsize. Forecasts of rain, strong winds and fog could hamper their race to locate any survivors. 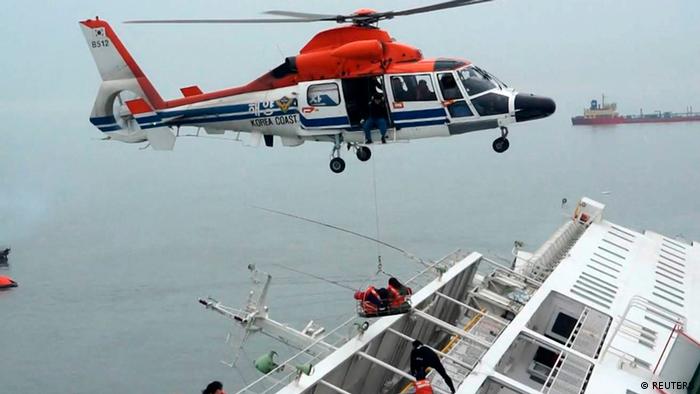 Rescuers continued efforts to locate almost 280 missing people in the early hours of Thursday, local time, with inclement weather forecast for later in the day.

Night-time efforts to reach any survivors in time had continued, using floodights and underwater flares.

The Sewol ferry carrying 462 passengers overturned in the early hours of Wednesday morning; 179 people have been rescued and at nine confirmed dead.

According to a report in the Korea Herald newspaper, water temperatures of around 12 degrees Celsius (53.6 Fahrenheit) and the depth of the waters off the island of Jindo reduced the possibility of finding those missing still alive. The coastguard expects that many of the missing could have been trapped within the overturned vessel.

The United States on Wednesday offered all of its available naval assets to assist with the operation.

State Department spokeswoman Marie Harf said the US 7th fleet stood "ready to assist with the search and rescue efforts," saying that the amphibious assault ship USS Bonhomme Richard had already moved to the site.

The cause of the Sewol's sudden sinking is yet to be determined, but survivors said they heard a loud noise just before the vessel started to tilt.

The ferry issued a distress signal on Wednesday morning and sank within two hours.

A 27-year-old crew member and two high school students were identified as deceased on Wednesday.

The Sewol was carrying 325 students on a school trip from South Korea's north-western port of Incheonto the island of Jeju, which lies about 100 kilomteters (62 miles) south of the Korean peninsula.

Shipping records show that the Sewol, with a capacity of around 900 passengers, was built in 1994 in Japan.

South Korea's Ministry of Security and Public Administration had initially announced that the majority of passengers had been rescued but later described those figures as a miscalculation.

That turned public hopes of a broadly successful rescue mission into sadness over one of the country's worst maritime disasters.