The Volksbühne theater has been at the center of controversy since its new director took the reins last month. Now an art collective has seized control of the building with plans to put on its own performance program. A group of activists occupied Berlin's Volksbühne auditorium on Friday evening, declaring the building the "property of the people" and adding another twist to months of intrigue surrounding the capital's venerable theater.

The protesters, reportedly members of an art collective calling itself "Dust to Glitter," said they had planned the protest months in advance and wanted to "liberate" the theater, resist the gentrification of Berlin, and protest the pillaging of the city's cultural life by investors.

"We recognize the liberation of this space and the subsequent self-government as an artistic and therefore political act: the city is theater, theater is the city," said one of the group's speakers according to Berlin daily newspaper Der Tagesspiegel.

She told hundreds of onlookers in the building's foyer that the group would occupy the Volksbühne, which translates literally to "People's Stage," for three months. During that time, activists would create an "anti-gentrification center" and "parliament of the homeless" at the site, she said.

One protester, Angela Richter, posted a photo of the occupation on Twitter with the caption "We declare the Volksbühne property of the people."

Berlin's senator for cultural policy, Klaus Lederer, criticized the activists in a Facebook post. While admitting that the "fight for free space is important and necessary," he said this could not happen if existing free spaces are "privatized" and put under "confiscated control."

It was not immediately clear whether the group was protesting against Chris Dercon, who last month took over from Frank Castorf as director of the Volksbühne. Castorf was well respected by local German artists for giving the theater an experimental and abstract direction during his 25 years as director.

Some activists told Der Tagesspiegel that Dercon could not return to the main theater building on Rosa-Luxembourg-Platz, but could continue working at the theater's second site at Tempelhof airport. 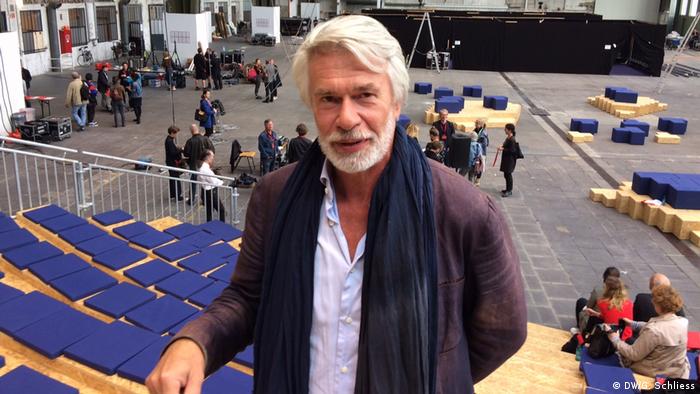 A spokeswoman for the activists, Rosalie Rabe-Blum, told local Berlin radio station rbb that the group was not personally criticizing Dercon, but that they took issue with his appointment at the "cultural and local political level."

The Berlin city government, which provides the theater with most of its financing, officially announced Dercon's appointment in 2015. The decision sparked outrage among some local German artists, who feared the newcomer would take the Volksbühne in a commercial direction and undermine the city's unique artistic culture.

Dercon, a Belgian, had previously been director of the Tate Modern in London and brought little theater experience to Berlin.

In June 2016, about 200 artists, technicians, and staff affiliated with the Volksbühne signed an open letter protesting his alleged plans to overhaul the theater and its traditions. One month later, international artists supporting Dercon's appointment responded with their own letter, warning the city's mayor against a "narrow-minded and self-interested coup d'etat."

Lederer initially campaigned against Dercon, describing his appointment as a "mistake" and warning that Dercon would introduce a "neoliberal art scene and jet setter attitude" to Berlin. But the senator changed his mind at the beginning of the year, arguing that the Berlin government needed to stick to its contract with Dercon.

Hate shouldn't belong to Berlin's lifestyle, as it unfortunately often does. DW columnist Gero Schliess reacts to the attacks against the Volksbühne's new director, Chris Dercon – which he sees as the tip of the iceberg. (21.09.2017)

The premiere of Johann Kresnik's adaption of the graphic novel "The 120 Days of Sodom" for stage at Berlin's Volksbühne has courted much controversy, with its graphic portrayals of pedophilia, incest and brutal torture. (28.05.2015)