An acid attack by a jailed ex-boyfriend has prompted a German woman to begin a civil claim before a Hanover court for €250,000 ($283,000) in compensation. The attack mutilated the left side of the beautician's face. 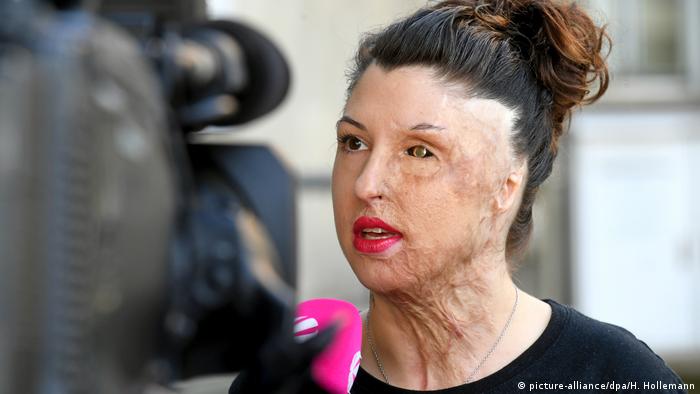 The attacker's lawyer told Hanover's Regional Court Thursday the ex-boyfriend, now serving a 12-year jail term for causing severe bodily injury, had no money to pay such a sum and rejected the claim outright.

The court's civil chamber is expected to deliver its ruling on 2 October.

In February 2016, beautician Vanessa Münstermann, now 29, was out walking her dog when her ex-partner emerged from behind a bush and poured acid on her.

She lost an eye and an ear and still requires further medical operations.

Opening proceedings Thursday, presiding Hanover judge Stefanie Piellusch said the sum sought was high in terms of past awards for civil damages in Germany, but added it involved an "extreme act with extreme consequences."

Northern German NDR public broadcasting said the court turned down the convicted man's application for legal aid funding, prompting a court spokesman to conclude that the "probability that the lawsuit will be rejected is extremely low."

The accused and victim were absent inside the chamber, but outside Münstermann said: "I am financially ruined, receiving only €1,000 as a small pension, which I have to legally claim for every year."

Civil compensation awards in Germany are relatively low in comparison with case law in the United States. Awards can be found listed in a German-language database of the C.H. Beck publishing house, compiled since 1993.

Münstermann, who in 2017 founded an association called "Scarred" [Ausgezeichnet] for crime victims, and recently gave birth to a daughter, went public in May, saying she wanted to display courage to others and thank those who has supported her.

German media reported in May that the newborn's father was a teenage sweetheart who made contact with Münstermann after the attack, renewing their friendship.

The attacker's parents reportedly offered compensation on the condition that Münstermann not speak publicly about the attacker.

"Hush money is not acceptable to me," Münstermann was quoted as saying by the German news agency DPA, adding that public appearances were therapy for her.

Indonesia's top anti-graft agent, half-blinded in an acid attack, has returned to work, telling colleagues to "stay brave." In a parallel gesture, President Joko Widodo has paid for a prized Danish-gifted Metallica LP. (22.02.2018)

A woman in Lucknow has been attacked with acid for the fourth time since 2011, Indian media reported. Violence against women very often goes unpunished in India, with several gang rape cases causing nationwide uproar. (02.07.2017)