The German artist was banned from painting by the Nazis but became an influential painter after World War II. Despite going blind towards the end of life, K.O. Götz remained active until his death, at the age of 103.

German painter Karl Otto Götz, also referred to as K.O. Götz, died at home on Saturday, confirmed the manager of the K.O. Götz and Rissa Foundation on Monday.

Born on February 22, 1914, in Aachen, Götz's career reflected the past century's tumultuous history.

Disapproving of his abstract and surrealist art, the Nazis banned Götz from painting and exhibiting. He nevertheless managed to make a living by painting landscapes.

"After 1945, he was one of the artists who gave our country its cultural dignity back, and he was an important promoter of freedom," said museum director Walter Smerling. 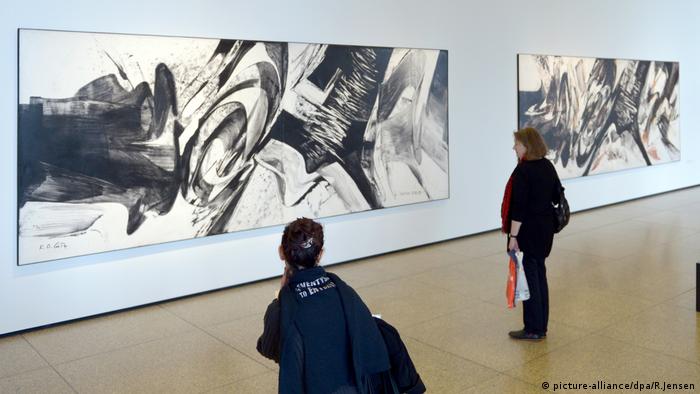 Works by Karl Otto Götz at a Berlin exhibition in 2014

He was the only German member of the influential artist collective COBRA. The short-lived avant-garde movement, active from 1948 to 1951, became renowned for its rebellious and spontaneous abstract paintings.

From 1959 to 1979, Götz was a professor at the Kunstakademie Düsseldorf. His most famous students include Gerhard Richter, Sigmar Polke, Franz Erhard Walther and Rissa. The latter became his wife in 1965.

Rissa helped her husband paint towards the end of his life, after he went blind.

A retrospective of Götz's work was held in 2014 for his 100th birthday at the Neue Nationalgalerie in Berlin, allowing many to discover his influential works.

His works infused with irony and reflection, German artist Sigmar Polke was an enigmatic observer of his era. A German museum is showing an enhanced version of the retrospective that's passed through New York and London. (13.03.2015)

He was one of the most significant contributors to abstract art and paved the way for modernism. Gerhard Richter and Sigmar Polke were among his students. German painter Karl Otto Götz has died at the age of 103. (21.08.2017)