A wine trip to Portugal

Portugal produces the famous port wine but also excellent red and white wines — which in turn attract tourists. More winegrowers want to profit from wine tourism, like in Dão, one of the oldest wine regions of Portugal. 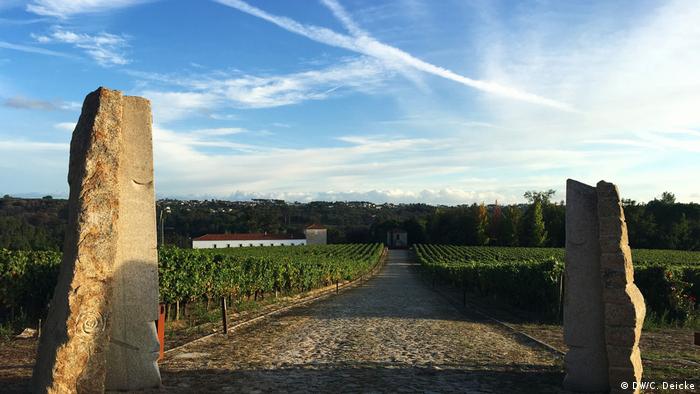 "Wine is a tough business," says Lígia Santos, pouring her guests a glass of white wine: "The cycle is incredibly long. The wine we plant now will not be sold for many years." In addition, there are weather fluctuations and plant diseases. And yet things are going pretty well for the 32-year-old and her family: Since 2012 they have been running the Quinta da Teixuga winery in the Dão, a renowned wine region which is located at the Center of Portugal. 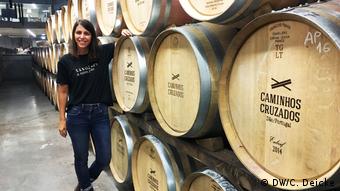 Like most farmers in the Dão, Lígia's grandpa cultivated several small vineyards for his own needs. Today, Quinta da Teixuga is one of the largest wineries in the region, with 30 hectares (74 acres) of vineyards for white and red wines.

The white wine from the 2017 "Encruzado" grape variety has a pale yellow color, tastes light and fruity, with a hint of lemon. "We grow the best white wine grapes in Portugal," says Lígia. Winegrowers from other wine regions such as Vinho Verde or the Douro Valley would disagree. "We always argue about where the best white wine comes from," says Lígia laughing: "Most of the time we win!"

An innovative combination: wine and architecture 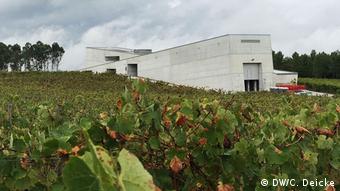 The winery building erected in 2017 shines concrete grey through the vines. The unusual shape is inspired by the family logo, a twin cross. "Caminhos Cruzados", crossing paths, is the name under which the family markets their wines. 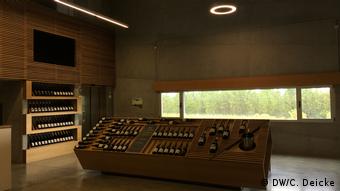 Clear and functional: Wines play the main part in the shop

The building houses the production line, wine cellar, laboratory, offices and a shop. Glazing and visual alignments connect the levels: a modern, open architecture, energy-efficient and adapted to the demands of wine production. The whole thing cost €1.2 million ($1.33 million). But business is going well, says Lídia, her wines are also popular abroad, in Brazil and China, for example: "In two years we'll have balanced the outlay."

Enotourism: Travel for intoxication and wine

The family business regards wine tourism as an opportunity, which is why they wanted a special architecture: "We had 2,000 visitors last year," says Lígia. These visitors book guided tours, wine tastings or the workshop "Winegrower for one day". Under supervision, they mix their favorite cuvée from various wines. 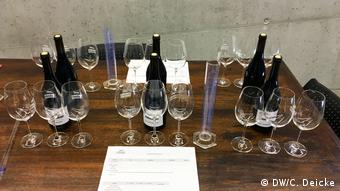 With pipette, measuring cup and protocol, visitors become winemakers in the workshop

For many, wine is a compelling reason to travel to Portugal. Most famous is the port wine — mostly red, rarely white — named after the port city of Porto. The Vinho Verde from the north of Portugal has also gained an international reputation. In addition, Portugal offers an extreme variety of wines: More than 500 native grape varieties grow here, with red wine predominant. Almost everywhere in the country, there are wine-growing regions — and they are increasing, as well as the tourist offers around the wine, the so-called oenotourism — the official name for wine tourism. 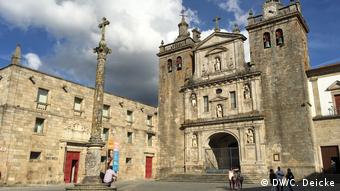 The Viseu Cathedral has been rebuilt and extended time and again

Those on a wine tour in the Dão region will also visit Viseu, once Portugal's most livable city. Viseu is a good starting point for excursions to nearby wineries. There is a pretty, labyrinthine old town, a lot of street art and an impressive cathedral from the Middle Ages.

Why eat poorly with good wine?

Since 2018 it has hosted an event to showcase the region's wines: The "Estrela à Mesa", a three-day street food festival which is part of the annual wine festival. The special thing about it is that star chefs cook here — small portions at low prices. They also serve regional wines and chat with the guests. 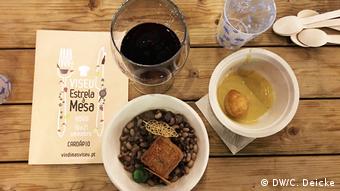 Fine dining on the street: dishes from Diogo Rocha, who otherwise cooks in the prestigious "Mesa de Lemos" restaurant

Ten top-class chefs from various regions of Portugal, one from the Netherlands, gather in the market square of the city with 100,000 inhabitants: This is without a doubt a region dedicated to pleasure.

Viseu and the Dão wine region are surrounded by mountains that protect them from the harsh climate conditions of the Atlantic. Rainy winters, hot summers and a long cool autumn season are ideal for viticulture, or wine growing. In Dão there are 20,000 hectares of vineyards, many of them very old, as well as the accompanying mansions and country houses.

Fly in for dinner

On the outskirts of Santar, 15 kilometers (9.3 mi) from Viseu, the company "Global Wines" cultivates 107 hectares of vineyards, most of which grow red wine. A restored 17th-century manor house is part of the estate, with a shop, guest rooms and the restaurant "Paço dos Cunhas". Its upscale cuisine is said to accentuate the wine.

The restaurant is full. Among the diners are tourists from the USA, Germany and Spain. "We use wine tourism to promote our brand," says Ana Teixeira, responsible for public relations at Global Wines. 5,000 tourists visit the winery in Santar annually. 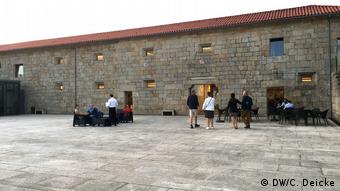 Every course of the menu is accompanied — naturally — by suitable wine. The main course this evening: Veal with yellow carrots and red wine sauce, nicely decorated, without foam and frills, just down-to-earth and yet very fine.

To accompany it a red wine from the historical grape variety "Touriga Nacional", one of the best of the region, is served. "Some guests come from Lisbon to eat well. And then they fly back again," says Ana.

Wine based on the lunar calendar

Sara Dionisio's winery is not that exclusive. She and her husband make organic and biodynamic wine and are certified Demeter producers. This makes them the only ones in Dão, and there are only ten in the whole of Portugal. In the Dão region they produce 100,000 bottles of wine a year, five red wines, three white wines and one rose. 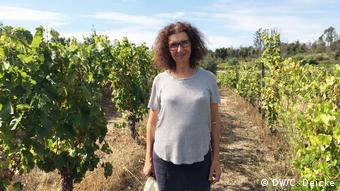 "Sometimes we still mash the grapes ourselves with our feet — but more for fun," says Sara: "After that I have purple feet for weeks." Of course, machines are also used. Otherwise, the motto is: minimal intervention — no mineral fertilizers, no pesticides. Instead, compost, cow dung and horn shavings, chestnut flour instead of wine yeast are used for fermentation. In addition, they use dynamized bio-compatible water according to the principles of homeopathy to improve the granite soil.

The vineyards are situated in a landscape of pine, oak and chestnut trees. And eucalyptus trees. They are one reason why the fires with which Portugal has struggled so hard in recent years can spread so quickly. Eucalyptus burns like tinder, essential oils in wood and leaves act like fire accelerators. But it is growing fast and is making a lot of money for the paper industry. In 2017 several vineyards of Sara and her husband burned down.

They planted new vines. And what if another fire comes? "We just hope that that doesn't happen. When it's very hot, we water the plants as a precaution," she says, "but there's not much more we can do."

Happy end in the wine cellar

"Tours under the motto: Hiking and wine are our bestsellers", tour guide Manuel Franco grins: "We hike, I show the people the area and at the end, we come to a wine cellar". He is currently leading a group through the historic village of Linhares da Beira. 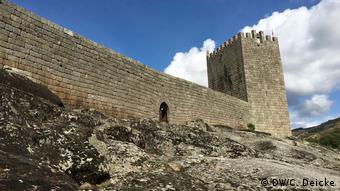 Located on the border with Spain on the edge of a natural park, it is one of 12 historic villages protected and preserved by a Portuguese government program. Most of them were once of strategic importance in securing the border to Spain.

Linhares was founded in the 12th century and the Santiago Way of St James pilgrims once passed through here. It is situated at an altitude of about 800 meters (2,625 ft) and is surrounded by orchards and old vineyards. Today, tourists come above all to admire the crooked granite houses and the imposing fortress. The sun burns on the bumpy pavement, and mongrel dogs bustle through the alleys. 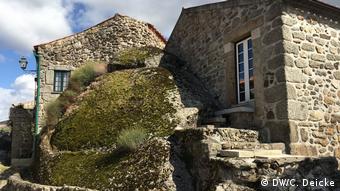 The houses of the village are partly built in granite rocks

Manuel Franco sends his guests for lunch to the restaurant "Cova da Loba". There are regional dishes, many with lamb and goat — and a spectacular wine list. Around 200 Portuguese wines are offered in this restaurant — up here, in a lonely mountain village with just 50 inhabitants. Those who enter the world of Portuguese wine can make amazing discoveries in this country and also experience an interesting variety of tastes in unusual places.

Editorial note: The article was written as part of a press tour.