A trip through Bowie's Berlin

David Bowie's new album has put the man and the city he once called home back into the spotlight. Thanks to a unique new city tour, visitors to Berlin can now see where the 'Thin White Duke' lived, worked and hung out. 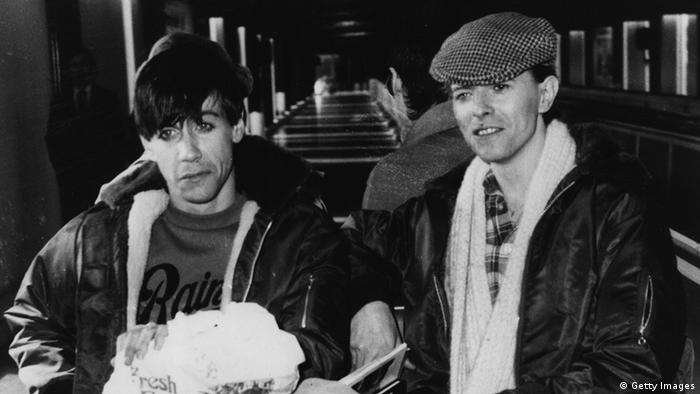 It requires a certain dedication to brave the sub-zero temperatures of a German winter and trek around a wet and miserable Berlin, with barely a ray of sunshine penetrating the overcast sky.

But your average Bowie fan will put up with greater inconveniences when given the chance not only to chat about their hero for a couple of hours, but also to re-trace the steps he took through Berlin back when he was a resident here in the late 70s.

The "Berlin Bowie Walk," organized by DJ Mike West as an off-shoot of his regular "Feeling Gloomy" club night (which, needless to say, features a healthy dose of Bowie tracks in the playlist), starts at the Neukölln subway station. This meeting point has more to do with practicalities than any solid connection to David Bowie; it's central and convenient but is also a tribute of sorts to the instrumental track "Neuköln" [sic] as featured on the 1977 album, "Heroes."

After the obligatory introductions, Mike scoots his sold-out tour group - numbering some 20 Bowie fans - onto the subway train bound for Kleistpark station. The first stop of this pilgrimage is Hauptstraße 155, Bowie's address during his Berlin years.

"So why did he move to Berlin?," Mike asks the assembled group. But he doesn't wait for the answer. "Well, there were a lot of reasons. He was interested in the history of the Weimar Republic and also in the music in Berlin at the time: Krautrock, bands like Tangerine Dream and Kraftwerk. And also at that point in his career, he was absolutely wasted on drugs. So he came to Berlin basically to be anonymous and clean up." 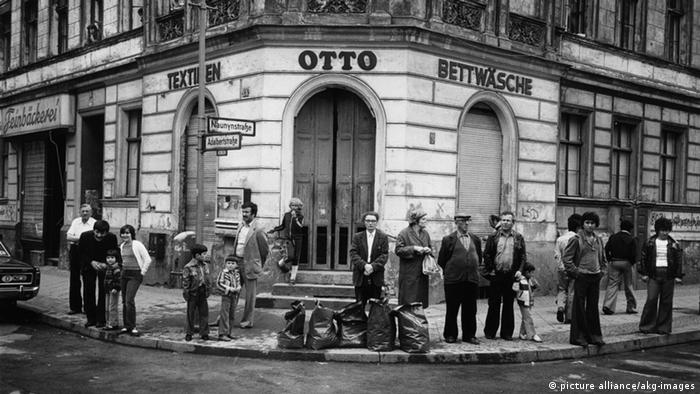 Berlin's Kreuzberg neighborhood in the 1970s

The anonymity offered by the curious atmosphere of a Cold War Berlin was something Bowie, one of the biggest stars in the world at the time, allegedly prized very highly. The Berlin attitude to celebrity was, and remains, slightly stand-offish; your average Berliner is rarely willing to let the mask of street-cred slip and let him or herself be wowed by a famous personality. Mike relayed, for instance, a story of back then - when fans, rather than hassle Bowie on the street, instead loitered outside record stores, waiting until the musician had departed and then going in to buy the same albums Bowie himself had bought.

But for now, the tour continues a few doors down from Bowie's former apartment - at the café Neues Ufer (New Shore). In Bowie's time, this cozy bar was called Anderes Ufer, literally "Other Shore," but the name can also be interpreted as "Other Side" - a reference to the fact that it was one of Europe's first openly gay bars and was a popular hang-out for Bowie and collaborator and partner-in-crime Iggy Pop. (Contrary to popular opinion, Pop lived in the same Berlin building as Bowie, but not in the same apartment.) Indeed, the bar includes a small gallery of Bowie paraphernalia.

After much stamping of feet to keep warm outside the bar, we climb onto the bus, this time heading to the teeming Potsdamer Platz. While today it's one of Berlin's shiny new tourist attractions, in the late 70s, it was a barren wilderness. After the group assembles at the point where the Berlin Wall once cut across the square, Mike explains the significance of the location.

It's related to one of Bowie's signature songs, "Heroes" (incidentally also recorded in German), and the lyric, "I, I can remember, standing by the Wall, and the guns shot above our heads, and we kissed as though nothing could fall."

"Interesting myth about the couple kissing in the song…" explains Mike. "Hansa Studios is just over there and as the story goes, Bowie was on the balcony looking at a couple kissing by the Wall. When asked by the press who 'they' were, he said it was just some random couple. The true story is that Tony Visconti, the guitarist who also produced some of his albums, was actually having an illicit affair with one of the back-up singers, so Bowie didn’t want to ruin his marriage by telling the press." 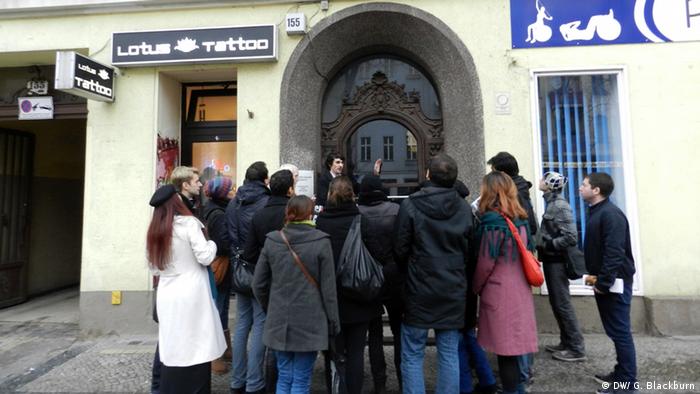 A pilgrimage to Bowie's former apartment

The aforementioned Hansa Studios is the next stop on the tour. Here, Mike describes the pioneering experiments in sound Bowie made with producer Tony Visconti - particularly, the cavernous drum sound created with the Eventide Harmonizer. Mike also explains that while the studios were regularly used by German bands, Bowie's association with Hansa really put it on the map.

After completing the last leg on foot, the tour winds up in front of the Brandenburg Gate, with a view over the Platz der Republik. This square in front of the German parliament building is where Bowie would return in 1987 for the "Concert for Berlin Festival."

Despite frost-bitten fingers and blue noses, and the occasional complaint that the information given on the tour has verged on the sparse, the eager group of Bowie enthusiasts are largely positive about their trip through the Berlin of the 1970s.

"It's been great," says one female visitor from Denmark. "I think Berlin has changed a lot since the time Bowie was living here, so it was interesting to see what it was like when he was here and where he went to, as opposed to where the arts community is in Berlin today."

"It's taken us to a new part of the city where we hadn't been before," added an American who's on the tour with his girlfriend, "We've been here nine months. It was interesting hearing about him going to the first openly gay café in Europe, that was really cool. Lots of new information." 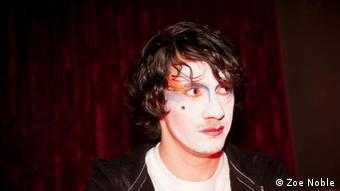 Tour guide Mike West says one of the main advantages of the tour is a chance for fans to hang out together, talk about their hero and, more importantly, exchange information.

"When I first did the tour, it was just me talking about Bowie," he said. "I'm not a trained guide at all. I’m finding out new stuff about Bowie all the time, so it's nice to add it in. The tour is constantly evolving."

One of Mike's ambitions is to organize a Bowie Pub Crawl, giving participants the chance not only to drink in the bars where the "Thin White Duke" once hung out, but also to offer an opportunity to get dressed up. The differing images Bowie presented over the years certainly offer a wealth of ideas for costumes.

"We get absolutely all kinds of people," added Mike. "Tourists, people who have lived here for years, old-school Berliners who were here when Bowie was."

"It's cool because everyone has a good time and I've made friends through it. It's not just talking about Bowie, it's about talking to like-minded people," he said.

"Where are we now" is the latest song by David Bowie. It's a nostaligic look back at the old West Berlin. But what was the spirit of that town on the frontline between East and West? And what's left of it today? (21.02.2013)

Dreary period pieces? Pricey tickets? Stuffy atmosphere? Not at the Kiez Oper! Aiming to bring opera to new audiences, the group behind the Berlin project is staging its latest production in an abandoned swimming pool. (21.02.2013)

Hot techno beats, casual sex, and the coolest insider tips - Berlin's nightlife draws revelers from all over the world. But can the capital live up to its reputation? DW's Elisabeth Jahn went to find out. (02.02.2013)