A Slow Spin on the Autobahn

A 80-year-old nursing home resident decided he needed something from the store up the road, so he sat out for a little drive -- in his wheelchair. 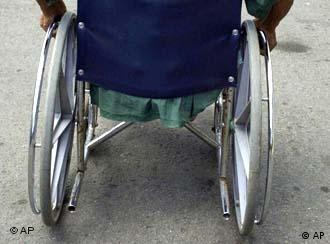 Going where few wheelchairs have dared to go before...

Truckers who normally barrel down the autobahn were shocked on Tuesday to find a senior citizen in a motorized wheelchair sharing the freeway with them.

"He wanted to go shopping at a service area up the road from his home," said a spokeswoman for the police in the eastern town of Görlitz.

Since the octogenarian retiree doesn't own a car, he took the one motorized vehicle at his disposal, which has a top speed of about 10 kilometers per hour (6 mph).

Several passing truckers notified police and one quick-thinking driver positioned his rig behind the man and protected him from the speed demons that normally travel down Germany's largely speed-limit-free expressways.

Police were on hand to collect the man after he made a slow exit off the freeway that runs from Dresden and the town of Bautzen. From there they took him back to the nursing home where he lives several kilometers away.

Whether he ended up getting what he originally wanted from the store is still unclear.

Read a selection of our "And Finally..." stories so you'll always be up to date on the quirkiest news items to come out of Germany.

Members of Germany older generation are looking at new models of living for their retirement years. They want security, comfort and social contacts; they don’t want a nursing home. Senior flat shares fit that bill. (May 3, 2005)

In TV ads, most people are young and beautiful. But this is changing in Germany and elsewhere in Europe as businesses discover that seniors have lots of money they'd prefer to spend on products created for their needs. (March 2, 2005)