A scandal rocks the young federal republic | Germany | News and in-depth reporting from Berlin and beyond | DW | 10.10.2012

The so-called "Spiegel Affair," 50 years ago, was one of the biggest scandals ever in post-war Germany. It was the first time since the Nazi-regime that government officials had taken action against the free press. 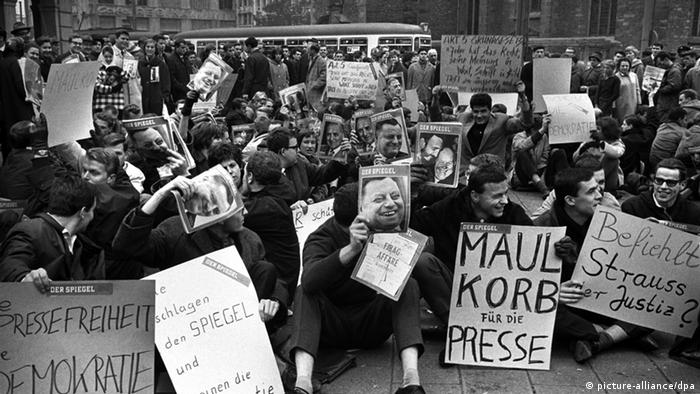 The receptionist thought the men had to be from St. Pauli, because of the way they simply marched past him without batting an eyelash. The visitors weren't from Hamburg's shady red-light district though, but from Germany's Federal Crime Bureau (BKA). And they were headed for the editorial offices of the news magazine "Der Spiegel," one of the most highly regarded German publications.

On October 26, 1962, under the cover of darkness, police searched the apartments of five Spiegel journalists, and arrested the two editors-in-chief, Johannes K. Engel and Claus Jacobi - all under the charge of treason. The search for the magazine's publisher, Rudolf Augstein, failed until he turned himself in two days later. The author of the article that started the whole affair, Conrad Ahlers, was arrested as well- during his vacation in Spain, by Spanish police. The Federal Crime Office in Germany searched Spiegel headquarters and kept them sealed and occupied for weeks.

The "Spiegel Affair" was one of the biggest scandals in post-war Germany. For the first time after the end of the Nazis' violent reign, a publishing house was shut down with the help of federal agencies to intimidate, gag and sideline journalists. It was not just a scandal about the relationship between politics and media, but one specific to the Cold War.

It all started with the question of whether West Germany at the time would have been able to defend itself against an attack by the Warsaw Pact, the looming threat on the other side of the Iron Curtain. The Berlin Wall had just been erected the year before, and the Cold War was in full swing.

In this environment, Spiegel's military expert, Conrad Ahlers, wrote "Partially Ready to Defend," a story about the results of the NATO maneuver "Fallex 62". It appeared in the magazine's October 10, 1962 issue.

Ahlers illustrated that the German government was not adequately prepared for a potential nuclear strike by the Warsaw Pact. There was no emergency law, and the hospital- and communications systems would collapse immediately. The population would not receive adequate medical care, and traffic would come to a halt. Ahlers also criticized the bad shape of the Bundeswehr, the German armed forces.

The article contained detailed information about the strength of NATO troops, their equipment, and their troop movements in case of war. The journalist pointed a finger at Defense Minister Franz-Josef Strauss [of the conservative Christian Social Union, CSU] as the man chiefly responsible.

On the same day the article was published, the Ministry of Defense commissioned a secret report, in which experts claimed that the Spiegel article revealed 41 state secrets. They declared as high treason the magazine's publication of the story.

Defense Minister Strauss pushed the investigation on his return from vacation. Prosecutor-General, Siegfried Buback, investigated Spiegel under orders from his agency and the Ministry of Defense. The charges: suspicion of treason, treasonous falsification and active bribery. The issue even came before the Bundesrat, Germany's upper chamber of parliament. Chancellor Konrad Adenauer defended the measures taken with the now famous phrase: " We have an abyss of treason in this country."

"Somewhat outside the law"

In front of the Bundestag, the lower chamber of parliament, Minister Strauss tried to downplay his essential role in the police actions and denied having anything to do with it. It was soon revealed, however, that Ahlers, the journalist who wrote the Spiegel article, was arrested under Strauss's order. That action especially was illegal and "somewhat outside the law", as Hermann Höcherl, interior minister at the time, had to admit. This euphemism remains a classic of politician-speak today. Two days after the interview in front of Parliament, Strauss had to admit being involved in the arrest of the Spiegel journalists. Members of Parliament felt betrayed and the "Spiegel Affair" turned into an affair of Chancellor Adenauer's government.

Publishers, journalists and professional associations all rallied around Spiegel. Bad memories had been re-awakened. In Germany and beyond, there was talk of intimidation, and gagging of the German press, words that hadn't been used since the Nazi regime. All over West Germany there were demonstrations and rallies for press freedom and the rule of law. All the while, Ahlers, publisher Augstein and three other Spiegel employees remained in jail during the inquiry.

On December 14, 1962, Chancellor Adenauer assembled a new cabinet - without Strauss. The former minister of defense was still given an honorable discharge celebration. The chancellor uttered the now famous phrase "Tough times shape a man" and announced his resignation for the fall of 1963. After 103 days in prison, on February 7, 1963, Augstein was finally released.

Two years later, the "Spiegel Affair" was in court one last time. In May 1965, a federal court refused to open the main trial against Augstein and Ahlers, saying that the content of the Spiegel article did not contain national secrets. In the case of Strauss, the prosecutor's office found the elements of unlawful assumption of authority and false imprisonment fulfilled but the case never came to trial. A constitutional complaint by Spiegel was also later denied by Germany's highest court.

The late publisher Rudolf Augstein once said, the attempt to eliminate the inconvenient Spiegel failed. In the end, the weekly even benefitted from the ordeal. Two generations of journalists later, the Hamburg-based magazine is still going strong - and not just economically. Ever since, Spiegel has had the reputation as a bastion of independent investigative journalism.