A rundown of AfD Islam beliefs ahead of Muslim meeting | Germany| News and in-depth reporting from Berlin and beyond | DW | 22.05.2016

A rundown of AfD Islam beliefs ahead of Muslim meeting

The Central Council of Muslims in Germany will discuss Islam with officials from Alternative for Germany. Since AfD switched focus from Euroskepticism to immigration, Islam has become the party's top grievance. 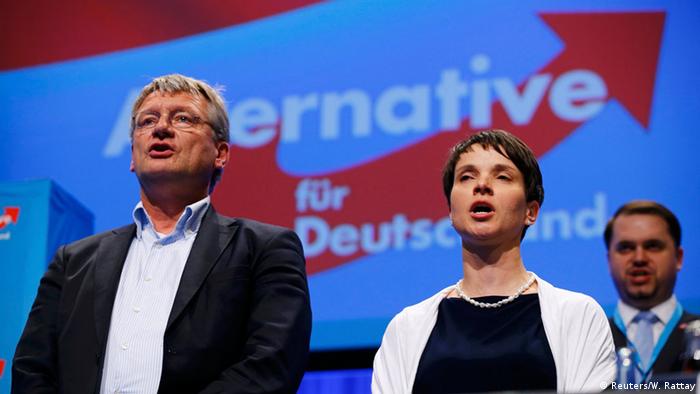 On Monday, Frauke Petry (right in photo), the chairwoman of Alternative for Germany (AfD), will meet with the Central Council of Muslims in Germany (ZMD). Petry will be taking on questions about AfD's recently published policy agenda, which includes the statement that "Islam does not belong in Germany." Also included in the AfD's policy paper is a ban on minarets, the Islamic call to prayer, and clothing that fully covers the face or body such as niqabs and burqas.

The program, which set to paper the anti-Islam rhetoric that the AfD had used for months, was adopted by more than 2,000 members at the party's congress three weeks ago. The AfD had made Islam its focal point when refugees from mostly Muslim countries began to arrive in Germany in increased numbers last year. However, AfD leaders have generally tried to cover themselves by saying that they are criticizing the religion itself rather than individual believers. Here are a few quotes from top AfD figures:

Beatrix von Storch, the AfD's vice chairwoman, told the Welt newspaper that Islamic organizations such as the ZMD had insufficiently distanced themselves from "those aspects of Shariah regarding civil law."

"We want to hear from them, for example, that they would recognize German civil law where it applies," von Storch said. 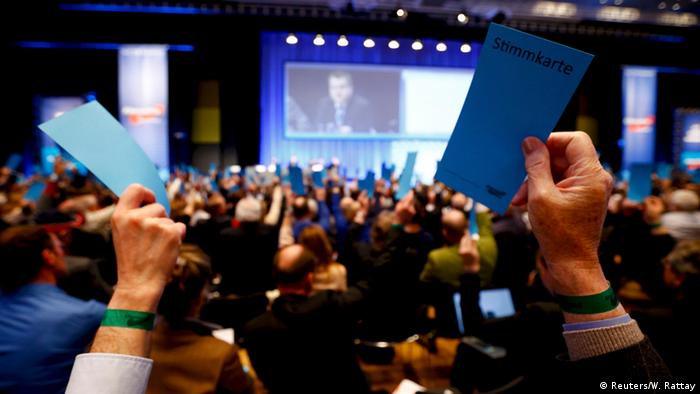 In April, von Storch told the Sunday edition of the Frankfurter Allgemeine Zeitung (FAS) that Islam is "a political ideology that is incompatible with Germany's constitution."

Also in April, in a somewhat contradictory statement, AfD federal spokesman Jörg Meuthen (left in photo) said that Islam should not be seen as a purely political ideology but also as a religion and that Muslims should be allowed to live their beliefs. He told the news magazine Focus that "religious freedom is also a part of the constitution."

Ahead of the party congress, Petry called minarets, an architectural feature of mosques, "Islam's symbol of power." She said she had no objection to the ways in which Muslims exercise their beliefs, but added that they do not need minarets in order to do so.

Björn Höcke, the head of the AfD faction in Thuringia's parliament, referred to the planned construction of a mosque in Erfurt, the state capital, as a "long-term land grab." The AfD supports citizen initiatives that seek to prevent construction of the mosque.

"We are a lay Christian country, and Islam is a foreign body," Alexander Gauland, the AfD chairman in the state of Brandenburg, told FAS ahead of the party congress. "In reality, there is no such thing as a Euro Islam, and it has never been made clear what kind of Islam that would be."

The party congress also attempted to take up the deep philosophical and theological question of whether members could support an "Enlightenment" movement in Islam. However, the AfD ruled the notion "not realistic and not desirable": "If we are against the Islamization of the Western world, we cannot be for the Westernization of Islam," said Hans-Thomas Tillschneider, a state delegate in Saxony-Anhalt.

In April, Gauland brought up pork, which is forbidden in Islam and Judaism. "It cannot be that our school lunches no longer contain pork only because it is better for some of the students," he said. "It cannot be that we have to play along with the rules of a religion completely foreign to us." Pork is not universally forbidden in German school lunches, though some districts have opted not to serve it, to serve less of it or to offer alternatives to pig-based meat products.