A long battle against tax havens | Business | Economy and finance news from a German perspective | DW | 05.04.2016

A long battle against tax havens

The Panama Papers have revealed a vast network of dubious offshore companies, ostensibly used to hide depositors' money from tax authorities. Politicians have been trying for years to shut down such oases. 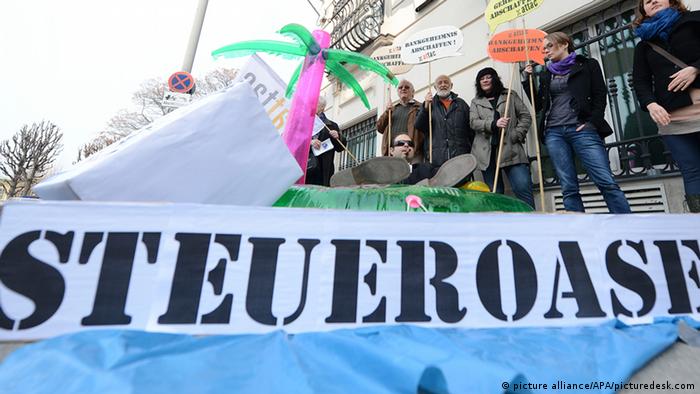 It all began in 1998 with an attempt to list all the countries whose tax laws violated the principle of fair competition. At the time, the Organization for Economic Cooperation and Development, a club of the world's richest countries, spearheaded its "Harmful Tax Competition" initiative, which aimed to combat tax havens. It didn't take long for OECD member states Switzerland, Austria, Belgium and Luxembourg to start making a fuss. They saw their models of banking secrecy endangered. But they finally came around - albeit only slightly - once the OECD's requirements were loosened.

When the European Savings Directive was adopted in 2005, however, the four staged a successful resistance. Instead of sharing information on foreign depositors with authorities back in their home countries, the four were able to push through a measure that foresaw them charging a so-called "withholding tax," which applied to capital gains. The result was that any hoped-for transparency fell by the wayside.

The financial crisis turns up the heat

It wasn't until the global financial crisis struck in 2009 that the dynamic changed in the fight against tax evasion. Suddenly, countries were scrambling to align their tax laws in order to prevent potential tax revenues from slipping through their fingers. Governments - and by extension, taxpayers - were being saddled with the cost of bailing out banks, and their patience with countries that had been black-listed by the OECD for maintaining strict banking secrecy was wearing thin. That atmosphere eventually led countries like Lichtenstein, Andorra or Monaco to relent and loosen their policies of secret keeping.

The end of banking secrecy

On October 29, 2014, 51 countries effectively agreed to abolish banking secrecy, signing an agreement that had been written according to OECD standards. There were 100 other countries that weren't signatories, but they had at least expressed their support for the measures outlined in the agreement.

Among those onboard were important financial hubs, such as Switzerland, Lichtenstein and Singapore. There were also several countries in the Caribbean and the Channel Islands, which had traditionally been a hub for so-called letterbox companies.

Panama and the US distinguish themselves

It's worth mentioning that Panama was as dismissive of the new OECD standards as the United States. "Panama was initially willing to participate, but it changed its mind when it saw that the US wasn't onboard," Markus Meinzer of the Tax Justice Network was quoted by Spiegel Online as saying. The Americans were cracking down on tax fraud as long as it was lucrative for them, but states like Nevada and Delaware are still home to many shell companies, according to Spiegel Online.

The agreement binds the signatories to informing each other about the foreign accounts of individuals. The automatic exchange of information was aimed at making it easier for tax authorities to control the flow of money abroad and fight tax evasion.

Banks and other financial institutions are still required to report on interest, dividends, account balances or proceeds from the sale of financial assets to domestic authorities. This happens if the beneficiary of such transactions lives abroad.

Furthermore, the agreement also sets the rules for special and spontaneous requests from authorities of another state. It foresees allowing authorities to deny such requests from their counterparts on the grounds that the relevant information is in a bank's possession.

The new regulation applies to accounts that were opened from January 2016 onward. Starting in September 2017, countries will be able to exchange data among themselves.

Meanwhile, some of the world's leading industrial nations have come up with an action plan for closing tax loopholes exploited by multinationals. In mid-January, representatives from more than 30 countries signed their first detailed agreement. The deal foresees internationally active companies reporting about their business undertakings and proceeds in various countries. This information would then be automatically exchanged between national tax authorities. The aim is that corporations are then taxed appropriately in all countries - another one of the OECD's ideas.

The OECD spoke of a "milestone," referring to its successful bid at pushing through its so-called BEPS initiative. BEPS stands for "base erosion and profit sharing," which is jargon used to describe the negative effect that multinational companies' tax evasion has on countries' tax bases. It refers to the practice of firms like Google, which managed to avoid paying any taxes on its profits using subsidiaries in Bermuda, Ireland and the Netherlands.

An action plan to rein in such practices was formally adopted at the G20 summit in Antalya last year. Specifically, summit attendees focused on point 13 of the 15 that the OECD's BEPS plan had laid out. The requested country-specific reports are to be compiled by parent companies in the country in which they reside. Those reports will then be automatically exchanged with tax authorities in other countries - although they won't be made public. But only companies with foreign subsidiaries and annual revenues of at least 750 million euros ($854.4 million) are subjected to the new rules. In Germany, fewer than 1,000 companies are expected to be affected.

Since the summer of 2015, the EU's fourth Money Laundering Directive has been in effect. It is aimed at hindering terrorism financing and transactions on the black market by, first and foremost, compiling exact records of people and their bank accounts. In order to combat money laundering, the German finance ministry also monitors cash payments - a controversial issue as it concerns the privacy of individual citizens.

Starbucks and Fiat face huge tax repayments when the EU issues a landmark decision this week on tax avoidance by multinationals. The case will set a precedent designed to curtail practices used to limit tax bills. (20.10.2015)