'A good neighbour': Istanbul Biennial on show in Munich

It's the first cooperation between Munich's Pinakothek der Moderne museum and the Istanbul Biennial. Will the exhibition "A good neighbour" contribute to building new ties between both countries?

We humans are surrounded by neighbors. People living right next to us are our closest neighbors. But also states are our neighbors. In both cases, communication can work well, or badly. Communication is a crucial factor that often decides on peace or war, in our immediate surroundings, or between neighboring states.

The 15th Istanbul Biennial only closed just a few weeks ago. Relations between Turkey and its neighboring states are quite tense. Quite a few artists, journalists and institutions were thinking about boycotting the art show in the increasingly repressive country. Some of those who did attend the event criticized it for being too well-behaved.

'Anything but a rebellious show'

The Istanbul Biennial show "A good neighbour" is now "on the move," as the title of the exhibition in Munich's Pinakothek der Moderne indicates.

However, only 12 of the original 56 participating artists are included in the exhibition, and two new artists have been added. The concept itself has remained unchanged.

Bernhart Schwenk, curator of the Pinakothek der Moderne, doesn't agree with those who criticized the exhibition for being too tame. The Turkey show did contain some very courageous works, he points out, mentioning the film "Wonderland" by Turkish artist Erkan Özgen that's also among the works now shown in the Pinakothek. Özgen, who is of Kurdish descent, lives in the Kurdish part of Turkey. For his three-minute video, he filmed a deaf-mute Syrian boy who pantomimes his war experiences. 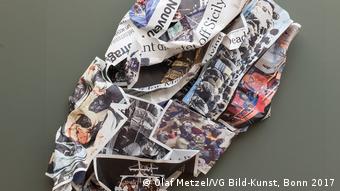 The exhibition "A good neighbour_On the Move" includes 50 works, among them installations by famous Greek artist Vlassis Caniaris, who died in 2011, as well as Mirak Jamal from Iran and US artist Andrea Joyce Heimer.

All these works reflect the artists' own personal experiences with global conflicts and social tensions, as well as different roles of men and women, and various forms of living together. The artists also examine how our concepts of homeland, neighborhood and cultural identity have changed over the years. 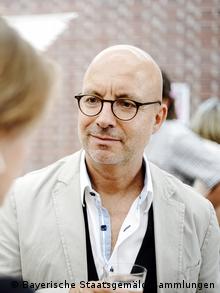 Dr. Bernhart Schwenk, curator of the exhibition "A good neighbour_On The Move"

The show in the Bavarian capital presents these works in a totally different context than was the case with the Istanbul Biennial. Curator Bernhart Schwenk finds this aspect particularly interesting, as in this way, a totally new significance has been added to the artworks.

Additionally, the character of the museum building with its classical look has added some impact to the show. Hanging next to works by Warhol, Kirchner and Beckmann, these contemporary pieces seem to be more vivid, colorful and bold.  "It's not that the artworks by Warhol, Kirchner or Beckmann were any less bold and colorful, but rather that their paintings have been framed with golden frames, and estimated at very high prices."

In Schwenk's view, it's vital to attract a broad audience to the show. "Many people think they aren't interested in museums because their knowledge of contemporary art is very limited, for whichever reason," notes Schwenk.

"I believe that we need to open up. After all, we are public institutions financed by taxes. That doesn't mean that we must curry favor with the public, but rather that we need to enlarge our basis." That's what this exhibition aims to achieve.

"A good neighbour_On The Move" is on show at Munich's  Pinakothek der Moderne until April 29, 2018.

Munich's Pinakothek der Moderne focuses on the consequences of global conflicts, as well as concepts of homeland and neighborhood, with artists describing their experiences in paintings, installations and films. (15.12.2017)