A German Mini-Me Pope to Cuddle

Now you can have that feeling of being part of the flock everywhere you go thanks to a new portable Benedict XVI pope doll which makes penance possible wherever you may be. 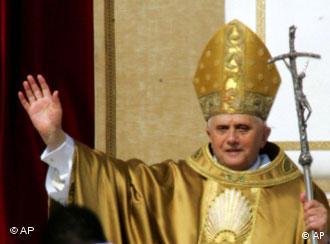 Pope comes with moving parts. A billion followers not included

While his boss is omnipotent, the pope himself cannot be in two places at once and can therefore not be expected to be there for every one of the 1.1 billion Catholics in the world in their hour of need.

While Pope Benedict XVI's beliefs prevent him from cloning himself, a German company has achieved the next best thing by creating a lifelike representation of the cardinal formerly known as Joseph Ratzinger which can be with the devoted wherever they may be -- if they are among the lucky 999 to get the new pope doll while stocks last. 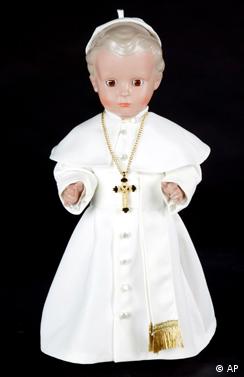 It might have gray hair, but it surely doesn't bear much of a resemblance to Benedict XVI

Unfortunately, the new baby-faced pope doll hardly measures up to the Bavarian pontiff in terms of size. The 41-centimeter (16-inch) doll would barely be tall enough to wave over the parapet of a balcony and would probably slip without trace down the back of the seat in the popemobile.

Even so, every one of the individually numbered collector's edition dolls is likely to be snapped up.

The doll, created by the Schildkröt dollmaker firm with the assistance of the Offermann dolls hospital, comes clad in white papal robes with a cross hanging round its neck, just in case anyone is confused as to whom it is supposed to represent.

Such signifiers will be welcomed as the face of the doll itself may throw some people as the 78-year-old pontiff's effigy looks a good few decades younger even though its makers point out that it's the first time one of their dolls comes with gray hair and gray eyebrows.

"Its arms and legs can be moved" and "its clothes are of a high quality and correspond exactly to the 'originals' of the Holy Father," the manufacturers said, which is comforting considering each doll costs 139 euros ($170). 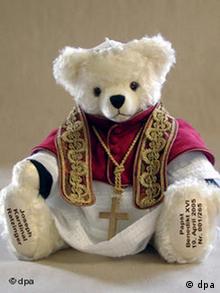 A pope teddy was the first toy to come to the market after Benedict's election.

If the child-like papal figurine is a little too unsettling, there is a cute pope teddy bear alternative for those looking for cuddly Catholicism. However, the plush pope will set the faithful back 160 euros.

There are currently no plans to extend the doll range to include a line of alternative garments, Vatican play-sets or spin-off collections featuring the great and good from the pope's backroom staff.

A 21-year-old who had the good luck of buying a Volkswagen whose seats were once warmed by the current Pope is suddenly flush with cash. Divine intervention? No: eBay. (May 6, 2005)

Papal Apartment for Sale in Bonn

An apartment building in Bonn where Pope Benedict XVI lived for four years has been put up for sale on Internet auction site eBay. (May 23, 2005)