5 best climate change articles for the layperson | World| Breaking news and perspectives from around the globe | DW | 01.12.2015

Covering economy, society, science and industry, these essays represent some of the best ways to become an expert, quickly. 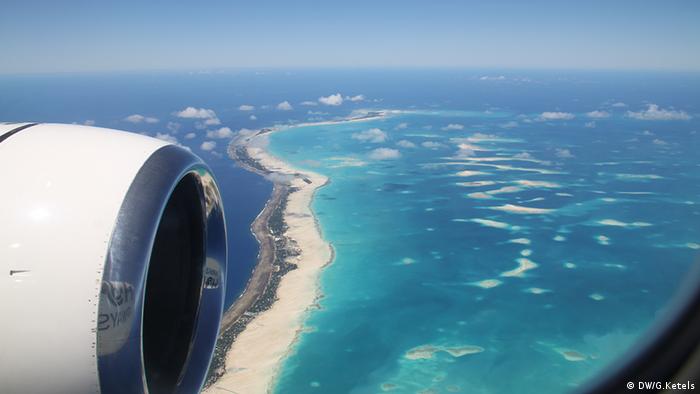 The Pacific island nation of Kiribati is one of the places most affected by climate change.

It's a rare feat to untangle the complexities of climate change and make them into something that is not just readable, but enjoyable. Plenty of writing about climate is overwrought, emotional, angry, preachy or just plain dull. Every now and then, an essay comes out on this difficult subject that rises above all the rest.

As the UN climate talks take place in Paris, these five articles reveal some of the biggest topics of climate change, from economy to society, from industry and science. It's not all focused on the massive size of the challenge, the last article shows how far the planet has moved towards a solution.

Likely the most-read article on climate change, ever, when it was published back in 2012, environmentalist Bill McKibben summed up the reality that the world is losing the battle against climate change. If climate change is happening because our world is addicted to fossil fuels then this article was a moment of clarity. As McKibben wrote, "We remain in denial about the peril that human civilization is in." And this was more than two decades after he wrote his first book on the topic. Despite widespread popularity, it didn't make waves in the broader media landscape. Why? #link:http://www.earthisland.org/journal/index.php/elist/eListRead/bill_mckibbens_rolling_stone_article_was_a_hit_so_why_didnt_it_make_a_splas/:Earth Island Journal# noted: "The mainstream media is reluctant to cover an issue that questions the very foundation of our economy." Luckily, that has slowly been changing, even in the three years since McKibben's article was published. And Rolling Stone has kept publishing game-changing journalism on climate, from a recent take on #link:http://www.rollingstone.com/politics/news/the-point-of-no-return-climate-change-nightmares-are-already-here-20150805:current nightmarish effects# to a look at #link:http://www.rollingstone.com/culture/features/what-megablazes-tell-us-about-the-fiery-future-of-climate-change-20150915?page=2:global fire problems# to a deep dive on #link:http://www.rollingstone.com/politics/news/why-the-city-of-miami-is-doomed-to-drown-20130620:problems faced by Miami.#

2. It's not climate change -- it's everything change. Margaret Atwood in #link:https://medium.com/matter/it-s-not-climate-change-it-s-everything-change-8fd9aa671804:Matter.#

As Atwood puts it, "Much of what most people took for granted (in 2009) is no longer universally accepted, including the idea that we could just go on and on the way we were living then, with no consequences. There was already some alarm back then, but those voicing it were seen as extreme. Now their concerns have moved to the center of the conversation." Atwood -- author of numerous contemporary classics, including The Handmaid's Tale -- paints a picture of our possible utopian and dystopian futures. It starts with a piece that Atwood wrote back in 2009 called, "A future without oil," for German newspaper, Die Zeit. That story is reproduced and built upon with a new essay about what has changed in the last six years.

It's just a small piece of the climate puzzle, but it puts the difficulty of scientific research into perspective: This multimedia expose from the New York Times is an in-depth look at what it takes to do scientific research. Readers see how to collect a data set from the melting ice on Greenland and gain an understanding of the science behind how sea level will rise in the future. The funding for the research comes from US tax dollars that is "under increasing fire by some Republican leaders in Congress, who deny or question the scientific consensus that human activities contribute to climate change." The article doesn't get too deep into the thinking of climate scientists, though many feel like they are under fire. #link:
http://www.esquire.com/news-politics/a36228/ballad-of-the-sad-climatologists-0815/:Esquire# did a deep dive on a different climate scientist doing research in Greenland who dared to speak his mind and paid a hefty price.

Despite scientific consensus on research about climate change, many in the United States continue to believe there is legitimate doubt. What is becoming more clear is that fossil fuel companies likely misled the public for corporate gain. Investigations by journalists at Columbia University School of Journalism, the #link:http://graphics.latimes.com/exxon-arctic/:Los Angeles Times# and InsideClimate News show "how Exxon conducted cutting-edge climate research decades ago and then, without revealing all that it had learned, worked at the forefront of climate denial, manufacturing doubt about the scientific consensus that its own scientists had confirmed." The company responded by #link:http://www.politico.com/blogs/on-media/2015/11/exxonmobil-climate-change-ethics-allegations-columbia-university-216287:going after the journalists,# but as a recent study points out, this work by fossil fuel companies that has #link:https://www.washingtonpost.com/news/energy-environment/wp/2015/11/23/why-are-so-many-americans-skeptical-about-climate-change-a-study-offers-a-surprising-answer/:changed the debate in America.# New York's attorney general opened a criminal probe and the Democratic presidential candidates #link:http://www.politico.com/story/2015/11/keystone-exxon-climate-change-216222:urged a racketeering investigation.#

Just so this listicle isn't all doom and gloom, here's the latest round-up of hope from commentator Jonathan Chait. Considering the changes since the last big climate conference in Copenhagen failed, there truly has been positive movement during the last five years. This is a story about how countries are cutting down on coal and building solar, about clean energy and electric cars. In essence, this is as close as we can come to the utopian future and it's actually looking pretty good.

Just in case that's not enough...

If this only served to whet your appetite for reading more about the climate, check out #link:http://www.dw.com/en/top-stories/climate-change/s-13967:DW's climate coverage,# with in-depth articles about the UN climate talks in Paris. In addition, the Guardian has recently decided to focus more intently on climate-related issues. They launched the new initiative with an #link:http://www.theguardian.com/environment/2015/mar/06/dont-look-away-now-the-climate-crisis-needs-you:excerpt of author and activist Naomi Klein's book# about climate change: "This Changes Everything: Capitalism vs. the Climate." For more depth on the climate change, this #link:http://edition.cnn.com/2015/05/19/opinions/sutter-2-degrees-book-club/:roundup by CNN# sums up the best books from the last decade or so. And finally, for that climate science doubter in your life, this clip from #link:https://www.youtube.com/watch?v=cjuGCJJUGsg:Last Week Tonight by John Oliver# should do the trick.

The point of no return

What Megablazes Tell Us About the Fiery Future of Climate Change

It's not climate change -- it's everything change

Greenland is melting away

When the End of Human Civilization Is Your Day Job

What Exxon knew about the Earth's melting Arctic

Why are so many Americans skeptical about climate change?

If enough of us decide that climate change is a crisis...