Attorneys General in 8 US states are suing the Trump administration over a decision to allow a company to post plans online on how to build a plastic gun using a 3D printer. Security officials have expressed concerns. 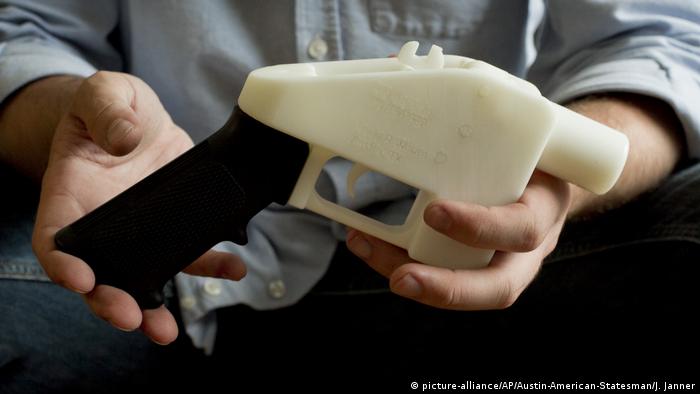 Eight states on Monday filed a suit in Seattle against the Trump administration over its decision to allow a Texas company to publish downloadable blueprints for a 3D-printed gun. The states claim that the hard-to-trace plastic weapons are a boon to terrorists and criminals and are a threat to public safety.

The suit asks a judge to block the federal government's late-June settlement with Defense Distributed. The settlement allowed the company to make the blueprints available online and officials say that 1,000 people have already downloaded plans for AR-15 rifles.

"I have a question for the Trump Administration: Why are you allowing dangerous criminals easy access to weapons?" Washington Attorney General Bob Ferguson, a Democrat, said in a statement. "These downloadable guns are unregistered and very difficult to detect, even with metal detectors, and will be available to anyone regardless of age, mental health or criminal history."

Separately, attorneys general in 21 states urged Secretary of State Mike Pompeo and Attorney General Jeff Sessions to withdraw from the settlement with Defense Distributed, saying it "creates an imminent risk to public safety."

Defense Distributed, the company making the blueprints available online, filed its own suit in Texas on Sunday, asserting that it is the victim of an "ideologically fueled program of intimidation and harassment" that violates the company's First Amendment rights.

The company's attorney, Josh Blackman, called it an "easy case." States are free to enact gun control measures, but "what they can't do is censor the speech of another citizen in another state, and they can't regulate the commerce of another citizen in another state when that commerce is authorized by a federal government license," Blackman said in an interview Monday. "It's a violation of the First Amendment, it's unconscionable and we're going to fight it to the very end."

It is not difficult to make a 3D gun. However, gun industry experts have expressed doubt that criminals would go to the trouble, since the printers needed to make the guns are very expensive, the guns themselves tend to disintegrate quickly and traditional firearms are easy to come by.

A 3D printer costs around $2,000 and can be programmed to build objects of almost any shape.  Next week, anyone can make plastic-bodied guns at home for just a few hundred dollars each. 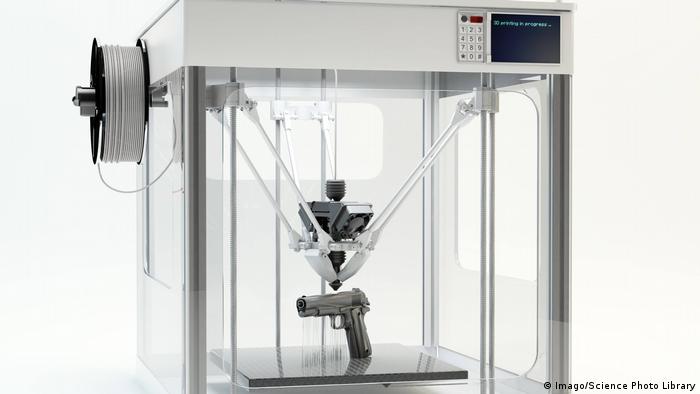 Security experts have expressed concerns that the plastic guns could evade metal detectors used in public buildings and airports. However, gun enthusiasts say that, without some metal parts, the guns will be unreliable and could even explode in a user's face.

In Germany, Sebastian Fiedler, the acting head of the German police trade union BDK, told the daily Welt on Tuesday that "the use of self-made weapons or making home-made weapons for violence is not new." He added that, "If you make such a weapon, or own such a weapon, you are in violation of the law."

Cody Wilson, the founder of Defense Distributed, first published designs for a 3D-printed firearm in 2013. The plans were downloaded about 100,000 times until the State Department ordered him to stop, saying it violated federal export laws since some of the blueprints were downloaded by people outside the United States. 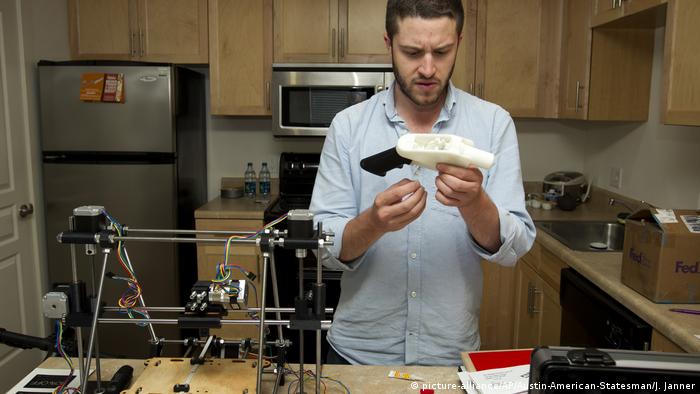 The State Department changed its opinion in late June, and agreed to allow Wilson to resume posting the blueprints. The files were published on Friday.

The company said it also blocked access to users in New Jersey and Los Angeles.

Jewellery from a 3D printer

The unusual jewelry designed by German artist Silvia Weidenbach explores the possibilities of 3D printing. She trained in traditional gold and silver smithing but prefers the possibilities modern technology has to offer. (06.05.2017)

What is a 3D printer?

The "Light Rider" only weighs 35 kilogramms, is powered by an electric motor and can reach speeds of 80 km/h. The first motorcycle from a 3D printer was developed by the German company APWorks. (15.04.2017)