3-D printing takes off in the aerospace industry | Science| In-depth reporting on science and technology | DW | 10.05.2014

3-D printing takes off in the aerospace industry

Components designed by computer and produced by a 3-D printer are becoming more commonplace. Leading the field is the aviation industry because it’s easy to make lightweight parts that are very durable. 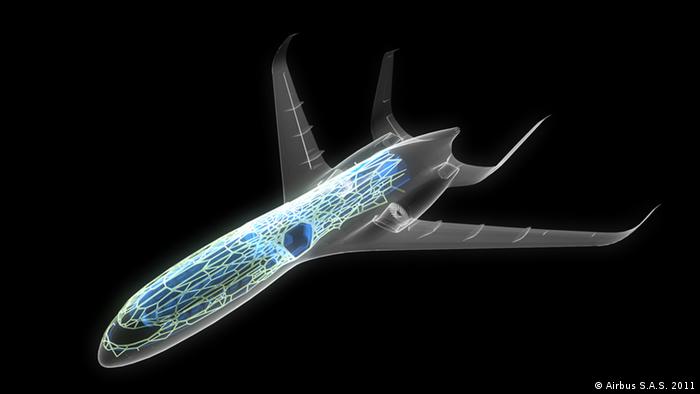 Imagine an airplane with a huge window where passengers look out at the sky around them through a transparent membrane. The struts holding the planes's fuselage together are geared more than ever before to the actual forces and load that affect the plane's rigidity and stability. They look tangled and more like a network of roots and not at all like components designed by simulation software.

Bastian Schäfer has presented this visionary aircraft at the International Laser Technology Convention in Aachen. The German engineer is researching designs for the aircraft of the future at Airbus in Hamburg.. "The lighter we design planes, the more fuel we will save,” said Schäfer. “That's why bionic lightweight construction and 3-D printing are the key technologies which will dramatically affect the aviation industry.” 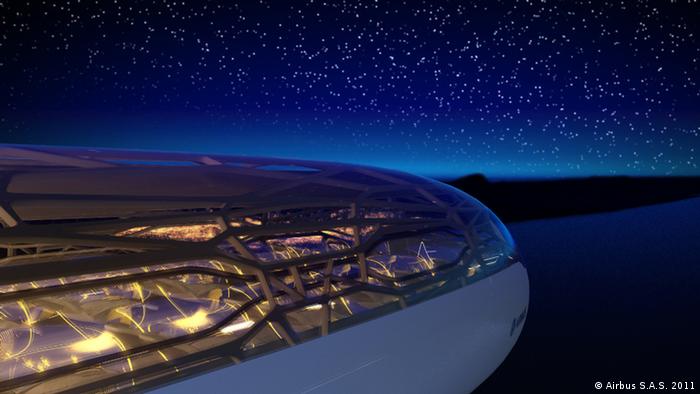 A bionic frame is much lighter than conventional frames

Up to 70 percent less weight

And that is why the Laser Convention in Aachen had such a strong focus on the aviation industry. Components designed on a computer and printed by a laser printer are gaining in popularity. Such manufacturing techniques create lightweight, resilient constructions that withstand extreme forces.

The Airbus idea has a lot to do with science and not much with fiction. Today, more and more aircraft components are already produced by 3-D laser printers. The weight reduction achieved by using so-called bionic designs is illustrated by a new cabin mount made of titanium. At only 0.6 kilograms (1.3 lbs.) it is only half the weight of the conventional component. 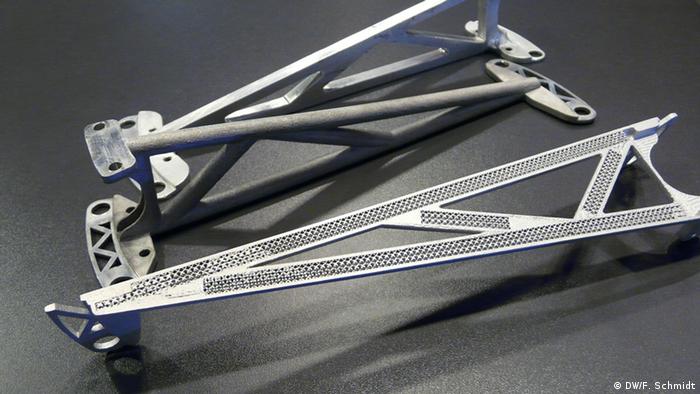 Bionic mounts are not just lighter than conventional mounts, they are also more durable

“Our mount was supposed to bear a weight of 2.4 tons. We inserted it in a testing machine and after a while it wasn't the mount that broke but the testing machine,” said Schäfer. In the end, the component withstood a load of more than six tons. It wasn't only lighter it was also much sturdier. The lesson was that weight could be reduced even more. The weight of single components can be reduced by up to 70 percent, according to the Airbus developer.

Melting in a powder bed

The Airbus mount was produced in a selective laser sintering process in which a laser melts the component layer by layer in a powder bed. This method allows the production of highly sophisticated and detailed components. The disadvantage is that even the production of small parts takes a long time because the layers are so thin. 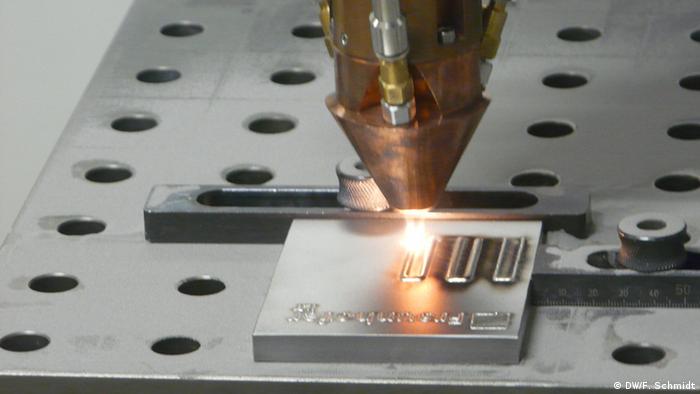 A welding head applies a layer on a metal plate

Not as fine and latticed, but much faster, is a welding process known as laser cladding, or deposition welding .A robotic arm passes a laser beam over a surface, while miniscule nozzles blow metal dust into its focus. The particles melt on contact with the laser beam, bonding to the surface, and a new structure is formed. This process is often used today to repair high quality components that are subject to wear and tear.

Serial production is already the reality

Laser printed metals are as durable as conventionally forged metals – even after repair. Every imaginable metal alloy - whether titanium, nickel, cobalt, copper or aluminum alloy - can be processed this way. Engineers are even able to print components made of ceramic materials. 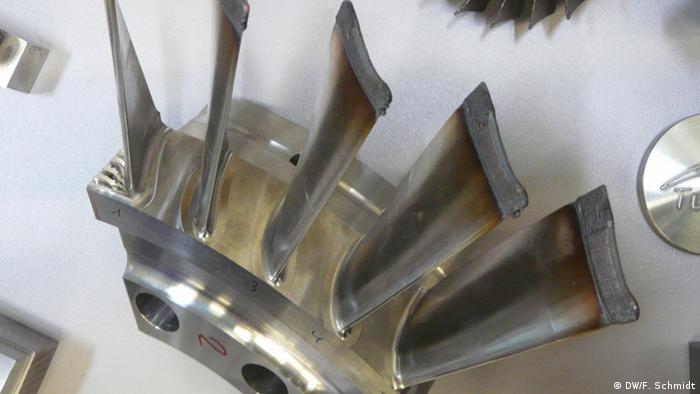 The tips of these turbine blades have been attached by so-called deposition welding, or cladding

Laser developers are convinced that 3-D printing is the future for the serial production of aircraft parts.

“General Electric (GE) is set to generate 100,000 jet fuel injector nozzles in the near future,” says Wilhelm Meiners from the Frauenhofer Institute for Laser Technology. “That is a mass production to be reckoned in the realm of jet engine construction.”

And GE is not alone. Other major turbine manufacturers, like MTU and Rolls Royce, are also focusing on components made by 3-D laser printers.

3D printing marks out the future of car making

Boston-based startup Mark One recently announced a 3D printer that can print composite materials. DW looks at how car makers are using the technology and its possible effects. (10.02.2014)

Scientists from five Fraunhofer Institutes have developed a method to produce artificial blood vessels in a laboratory - using a 3D printer! (16.09.2013)

3D printers can create almost anything these days, from eyeglasses and coffee mugs to working handguns. But now architects in Amsterdam are dreaming bigger. Much bigger. (21.08.2013)