20 years after communism′s collapse, Poland′s economy is thriving | Europe| News and current affairs from around the continent | DW | 15.10.2009

In 1989, Poland’s economy lay in tatters. Twenty years on, it now appears relatively untouched by the global downturn, and promises to be Europe’s only economy to show positive growth this year. 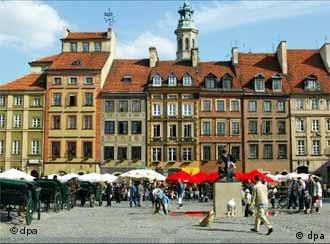 Warsaw's marketplace has been restored, and the economy is growing

Poland's international airports are doing a bustling trade, thanks to the planeloads of Polish holidaymakers booking charter flights to destinations such as the Egyptian Riviera, Crete, Morocco and Thailand. It seems that Poles' willingness to travel hasn't been impacted by the financial tremors that have hit Europe. In fact, the Polish middle class continues to spend like nobody's business, and foreign travel is high on its list.

Jacek Dabrowski, financial director of the travel agency Triada says that, until 2008, the Polish outbound tourist market grew by 40 percent each year, and this year's results promise to be better than the European average. 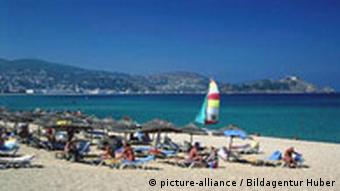 "According to statistics from Eurostat, the number of customers choosing foreign holidays is growing," said Dabrowski. "Organized outgoing travel in Poland has great potential for growth. The reason is the growing purchasing power of Poles since EU accession, which means that Poles are now choosing better hotels, more expensive destinations and generally spending more money abroad."

But how do Polish tour operators manage to keep their heads above water with competing large German travel companies treating Poland as a lucrative market? According to Dabrowski, the Polish companies' edge lies in their flexibility. Having to build up businesses from scratch and steer them through tough market transformations, Polish entrepreneurs have learned to take risks and adapt quickly.

But it's not just in the holiday market that evidence of economic success abounds in Poland. There's the growing number of foreign direct investments, which last year alone totalled a cool $16 billion (10.7 billion euros). Increasingly, investors are looking for more than just cheap labor; they're setting up service and R&D centers, for example.

"Poland has become the only country in Europe where consumers are spending more than they used to spend a year ago, and where corporations are spending more," said Slawomir Majman, president of the Polish Information and Foreign Investment Agency in Warsaw. "Poland's exports are growing. And most importantly, Poland is delivering the product which is definitely in short supply in 2009: economic stability." 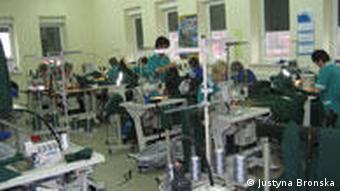 Textile factory in Poland: the country has been protected from the financial crisis

It all seems light years away from the autumn of 1989, when it became clear that the outgoing communist regime had not only mismanaged Poland's economy on a shocking scale, but also run up billions of US dollars in foreign debt. Then, food queues, chronic shortages and rampant inflation earned Poland the reputation of being the sick man of Europe.

At the Warsaw School of Economics, Professor Leszek Balcerowicz put together a "shock therapy" plan to invigorate the country's economy. He's now known as the father of Poland's market reforms, but looking back, he admits that the challenges facing the country two decades ago were daunting.

"Poland was burdened by the troubles of communism - huge waste, inefficiency, declining production," said Balcerowicz. "In addition, there was huge foreign debt incurred in the 1970s, and a runaway inflation of 50 percent a month. It was an economic catastrophe."

Balcerowicz's bitter pill was a strict monetarist approach, coupled with fast-paced market reforms, which quickly put Poland's house in order. Even though Polish governments have changed frequently since then, Balcerowicz is happy that politicians have consistently kept the country's finances in check, and made the most of Poland's natural advantage: its size.

"We are a much larger economy than the Baltics, or the Czech Republic, or Slovakia, or Hungary," he said. "As a result, we suffer less from external shocks. Until 2007, monetary policy in Poland was pretty conservative. The rate of credit growth was not very rapid, so we didn't develop a housing bubble. I'm happy that, as a governor of the National Bank of Poland until 2007, I managed to bring inflation down from around 10 to 2 percent."

As a new academic year starts at Balcerowicz's School of Economics in Warsaw, this year's 19-year-old freshmen are the first generation to have been born in a democratic Poland. Never having known communism, their entire lives have been punctuated by the growth of Poland's market economy. Now that solid foundations have been laid, it will be their job to continue the process of catching up with the world's most developed economies.

Film project looks to open up the German-Polish cultural border

The last border controls between Germany and Poland disappeared in 2007, but Germans and Poles still do not know much about each other. A nomadic film project wants to change that – in the tradition of travelling cinema. (20.08.2009)

Listen to a report on the situation in Poland in 1989