16,000 children under five die every day

Child death rates have fallen but are still well short of a target set by the United Nations, a new report says. This year, some 5.9 million kids will die - mainly of preventable causes - before their fifth birthday. 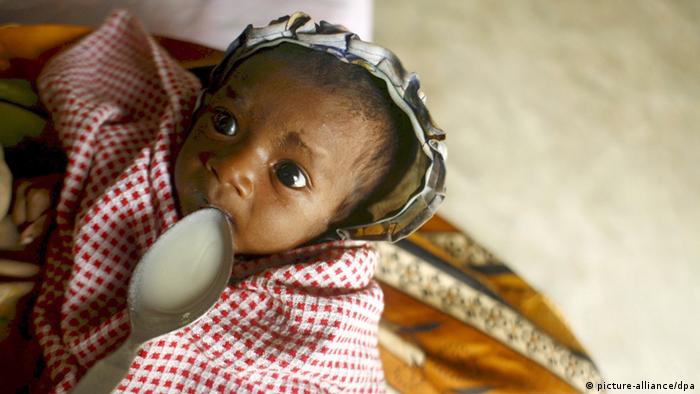 The mortality rate among children under five fell globally from 91 deaths per 1,000 live births in 1990, to 43 per 1,000 in 2015, according to a new international report. Nearly half of infant deaths are tied to malnutrition, and 45 percent occur during the first 28 days of life.

"We have to acknowledge tremendous global progress," said Geeta Rao Gupta, UNICEF deputy executive director. "But the far too large number of children still dying from preventable causes before their fifth birthday - and indeed within their first month of life - should impel us to redouble our efforts to do what we know needs to be done."

Steps taken around the world have prevented the deaths of an estimated 48 million children since governments pledged in 2000 to reach the UN goal of cutting death rates by two-thirds by 2015, said the report, which was conducted by UNICEF, the UN, the World Health Organization and World Bank Group.

In sub-Saharan Africa, one child in 12 dies before his or her fifth birthday, the highest rate in the world and more than 12 times higher than the one in 147 average for under-five deaths in high-income countries, the report said. Leading causes for the children's deaths are labor complications or premature birth, pneumonia, diarrhea, sepsis and malaria.

World leaders are expected to adopt a new set of goals for the next 15 years later this month. UNICEF said 38 million more lives of young children can be saved if progress to reduce child mortality is accelerated.

"The unfinished business of child survival looms large," the latest study's authors wrote. "Every child's death represents the loss of a unique human being."

A major outbreak of measles has killed almost 320 people and infected at least 20,000 in the Democratic Republic of Congo, according to the UN. The disease can be countered by a vaccine - but many obstacles remain. (14.08.2015)

Poor children in Indian cities are three times more likely to die before their fifth birthday than their affluent peers, says a recent report, which ranks India among the worst in the world in terms of health inequity. (06.05.2015)