13 cultural references that made Friday the 13th unlucky

Through myths, books and films, Friday the 13th has become an unusual day — even for those who aren't superstitious. The makers of the same-named movies might know a thing or two about this.

In 1980, a slasher film featuring a masked killer was shot on a budget of $550,000 — and obtained nearly $60 million at the international box office: Friday the 13th. It has since turned into a franchise that includes not only many movies, but also novels, comic books, documentaries, video games and game boards.

Jason, the iconic fictional character haunting Camp Crystal Lake, is a cult figure that is even reproduced in hipster tattoo designs. His hockey mask is one of the best-known images of horror movie culture. 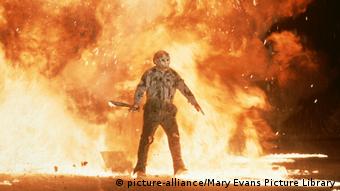 "Jason Goes to Hell: The Final Friday" was the ninth sequel, released in 1993

If the US horror franchise is mostly associated to the genre's popularity in the '80s, a few more sequels were released after that infamous decade. The 12th slasher in the series was released in 2009.

Since that year, a 13th sequel to the 2009 reboot has been rumored to be in the works. The initial release date was announced for August 13, 2010. It was then pulled from that slot and the project was put on hold.

Ever since a script has been completed in 2011, different release dates have been announced — always on a Friday 13, obviously. Yet producers have kept pushing that date back.

An ongoing legal battle to determine who owns the rights to the character of Jason — Victor Miller, the original film's screenplay writer, or Sean Cunningham, the movie's director and owner of the franchise — is blocking a potential 13th film.

After all, there's something about that number...

Click through the gallery above to discover more cultural references that contributed to the Friday the 13th superstition.

It all started as a musical in 1973. It was then adapted into a film two years later that became a cult phenomenon like no other. Now, Fox has produced a TV remake. Are viewers ready to do the "Time Warp" again? (18.10.2016)

Use spiders, use the dark: Why horror films and the Walking Dead are good for you

On Halloween, millions watch horror movies and try to terrorize themselves and anyone close by. Horror expert Mathias Clasen tells DW horror is good for us - and offers tips on scaring people silly. (30.10.2014)

Why Friday the 13th is seen as unlucky

Through myths, books and films, Friday the 13th has become an unusual day — even for those who aren't superstitious.