100 years ago: Premiere of 'The Cabinet of Dr. Caligari' 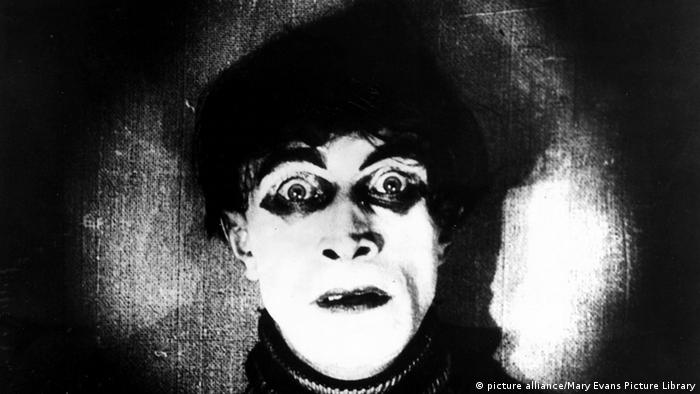 Strong black and white contrasts, a world of shadows and blackness. Angular studio buildings and monstrous signs on the wall. Oblique angles and perspectives. The world has gone off the rails. Performers flinch through the rooms, panic stricken, driven by visible and imagined horrors. This is the film "The Cabinet of Dr. Caligari," first shown 100 years ago, on February 27, 1920, in the Berlin movie theater "Marmorhaus."

It must have been a disturbing premiere. A silent film flickered across the screen of a kind that had never been seen before: frightening and surreal, dark and seemingly hopeless. It was a noteworthy event — also because this German silent film changed many things. "The Cabinet of Dr. Caligari" turned out to be one of the most influential films ever made. 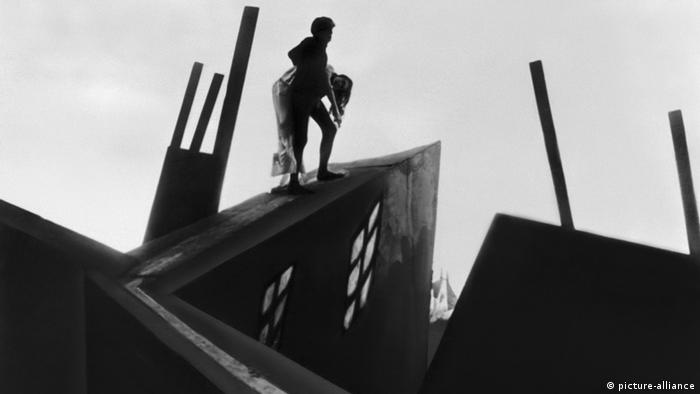 Sharp edges and contours: "The Cabinet of Dr. Caligari"

Director Robert Wiene's work is considered the early high point of expressionism in film today. Expressionism had already gained a foothold in the visual arts a few years earlier, and many German painters and graphic artists such as Ernst-Ludwig Kirchner and Max Pechstein influenced the style. Expressionist art was a counter-art: against naturalism, against impressionism, against soft lines. There were also expressionist developments in literature and music, theater and dance during that time.

Film and cinema from Germany set standards, and the 1920s became the heyday of expressionism in movie theaters. Besides "The Cabinet of Dr. Caligari," works such as "Nosferatu - A Symphony of Horror," "The Golem and How He Came Into the World" and "Dr. Mabuse" became all-time classics. Fritz Lang, Friedrich Wilhelm Murnau and comedy director Ernst Lubitsch were the most famous German filmmakers who catapulted local cinema to world fame, influencing European and especially Hollywood films. Like many other German artists, the three directors later went on to Hollywood. 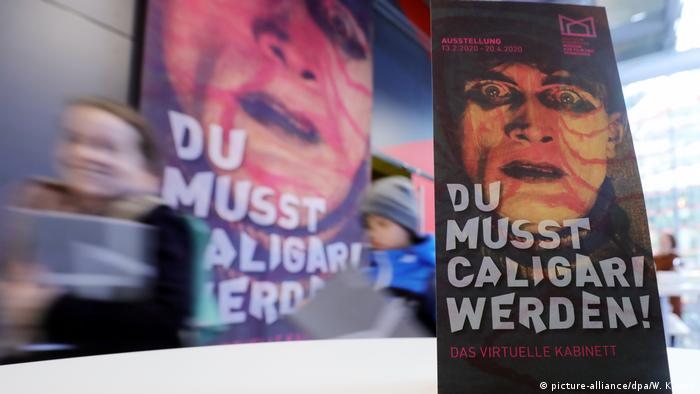 Director Robert Wiene may not have become quite as famous, but "The Cabinet of Dr. Caligari" had a lasting impact on fantastic cinema, horror films and film noir, and its influence is felt even today. In the 1960s the material was re-filmed in the US, and later-generation American directors such as David Lynch and Tim Burton were influenced by "Caligari."

How can that be explained? It was the merging of form and content: Sharp contrasts, jagged lines and buildings that continue into the sub-titles reflected the protagonists' state of mind. Dramatic-looking film buildings could be seen as psychograms of the characters. The film medium could not tell a better story in those days. It didn't even need language and sound, just images and music.

As for its content, "The Cabinet of Dr. Caligari" is complex; the framework story has to do with Dr. Caligari, a scientist who exhibits a sleepwalker at fairs, "controls" him through mysterious channels and has him murder people. 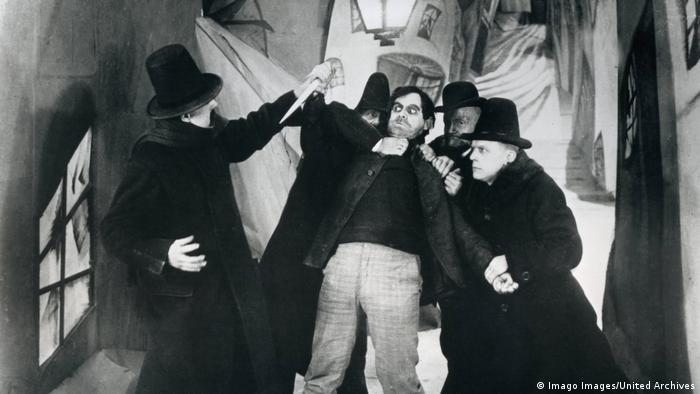 Fairground turbulence in the film

In the end the question arises: Who is insane here?

Two young men and a woman watch the goings-on. One is killed by the sleepwalker. Police and doctors try to catch Caligari, who turns out to be the director of a lunatic asylum. Are the others insane? Or is it Caligari, who perfidiously disregards reason and rationality and manipulates the world for his own gain?

Even today one can watch "The Cabinet of Dr. Caligari" as often as one likes without quite getting to the bottom of it, which makes the film so appealing. Critics and experts often grit their teeth over Robert Wiene's work, and countless meanings and interpretations have been advanced by the most famous publicists and film historians. 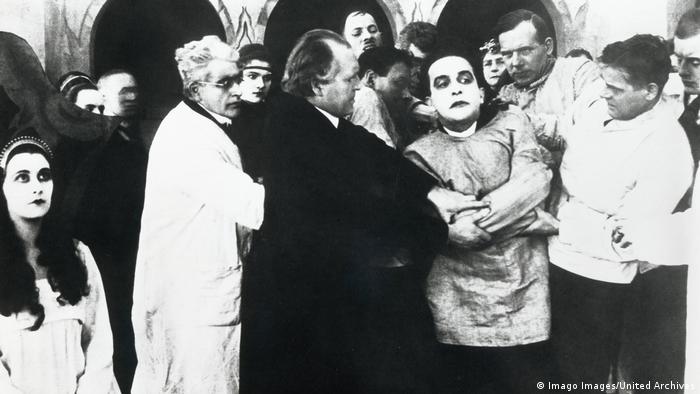 In the end the question arises: Who belongs in the straitjacket?

How much Hitler is in Caligari?

"From Caligari to Hitler" was the title of probably the most famous and sometimes influential German film book of the first half of the 20th century. Written by Siegfried Kracauer, it first appeared in English in 1947. Kracauer's thesis: In the early 1920s, Wiene and his screenwriters had anticipated the rise of the National Socialists. Films like "Caligari" laid out Nazi characters and methodology. Unconsciously, other directors and scriptwriters had also designed characters similar to those that became grim reality after 1933. Parts of this thesis were later contradicted. 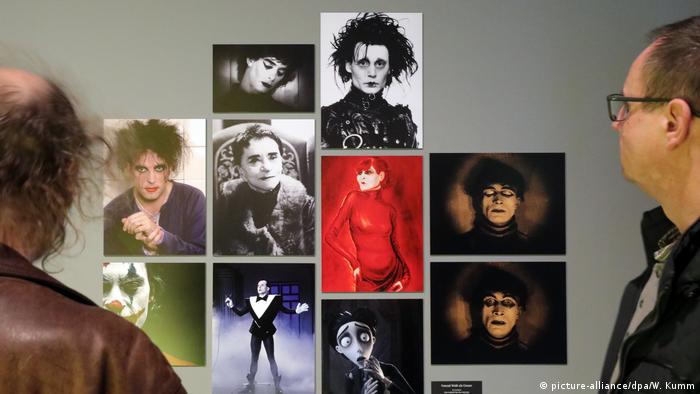 The Caligari exhibition in Berlin shows influence in cinema, art and culture

It is nonetheless impossible to overlook how German cinema in particular filled the screen with figures of horror and terror in those years and how murderers and tyrants in movies incited others to violence and destruction. One can still debate whether Dr. Caligari's features are recognizable in Adolf Hitler and how his sleepwalker symbolizes the German people, steered within a few years towards mass murder.

The Caligari film also indisputably influenced works by later directors. An exhibition that opened its doors shortly before the beginning of the 70th Berlinale also examines that. "You Have to be a Caligari! - The Virtual Cabinet" is on view until 20 April at the Deutsche Kinemathek/Museum für Film und Fernsehen.

Screening 1920s Expressionist masterpieces "The Cabinet of Dr. Caligari" and "Waxworks," and an adaptation of legendary Weimar novel, "Berlin Alexanderplatz," the Berlinale refocuses the cultural highs of the Weimar era. (25.02.2020)