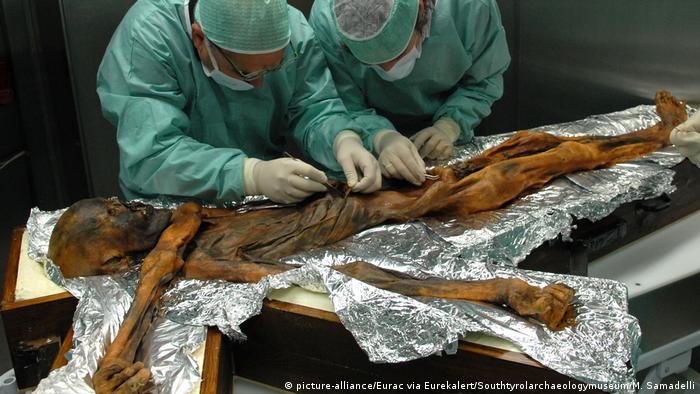 Ötzi, the Alpine man whose well-preserved mummified body became a global sensation, had a fatty stomach full of Alpine ibex, deer and grains when he died some 5,300 years ago, according to a new study by the Italy-based Institute for Mummy Studies.

Ötzi likely ate the meat raw or cooked, researcher Frank Maixner said, adding that ibex and deer were a regular delicacy for him and his ancient contemporaries.

Fat also made up some 50 percent of Ötzi's stomach contents at the time of his death. High amounts of fat, Maixner said, gave ancient Alpine wanderers the energy necessary to hike at high altitudes for extended periods of time.

Maixner and his colleagues have published the findings in the scientific journal Current Biology.

Tourists found Ötzi frozen in ice in the Ötztal Alps in 1991. But analysis of the man's stomach was only recently possible after researchers in 2009 found that it had shifted to another part of his body.

Previous studies of Ötzi's body found that he was lactose intolerant and suffered from an infection, dental cavities, stress and Lyme disease.

But researchers say hunger and disease did not kill the world's most famous iceman. He is instead believed to have died after being shot through the shoulder with an arrow.

Grief-stricken parents laid white roses on the steps of a Thai nursery where an ex-police officer began his shooting rampage. The majority of the 36 victims were children, who were slain while taking afternoon naps.

US media has reported the Justice Department asked Donald Trump to hand over any classified documents that remain in his possession. Last month, the National Archives said some presidential records are still missing.