Researchers recently explored hydrothermal vents in the Gulf of California, up to 4,000 meters deep. DW spoke with marine biologist Greg Rouse about what kind of creatures live down there and how they manage to survive. 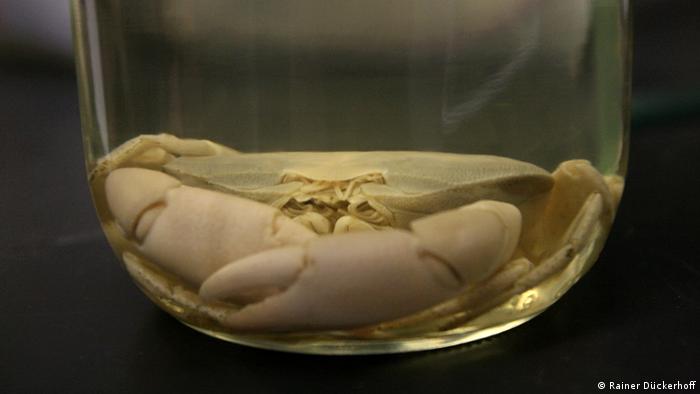 Deutsche Welle: Mr. Rouse, In November 2018, your research team explored hydrothermal vent fields at Pescadero Basin, 150 kilometers off the coast at La Paz in Mexico. You brought back detailed maps of the place, high-resolution video via underwater robots and specimen of animals that live down there.But the first question is, of course, how can life exist so deep down in the ocean, where there is no sunlight?

Greg Rouse: There is a whole food web down there based ultimately on bacteria and hydrothermal fluids. Some microbes have evolved to gain energy from these chemicals, such as hydrogen sulphide.

There are a lot of free-living bacteria forming bacterial mats. Animals eat those, they are actually grazing on them. Then there are things like clams and tube worms — they farm bacteria inside their bodies. Most of the biomass down there comes from animals that have symbiotic bacteria in their bodies. It's very efficient and they are able to grow very large. And other animals eat them. Crabs, for example, prey on tube worms.

Read more: Sharks use Israel's coast as a Jacuzzi

What fascinated you the most, down there at Pescadero Basin?

'Xenoturbella profunda' — we also call them purple socks or sock worms. They have a very simple body. They have a mouth underneath, and otherwise they are a bag, there is nothing else. There is no anus. They have no real brain. They have no kidneys. I've been working on them for 13 years and to see them alive and watch them was really exciting. We also found some crazy blue scale worms and watched them fighting with each other. So my immediate answer is those two things, but there's a lot of other things I want to study in the coming years. My students and I have years of work here.

The scale worm you mentioned is shiny blue – why this color when there is no light around?

We think it is an accident. They have a cuticle, a covering of the scales. It is probably quite thick and it is just an accident by the nature of the cuticle structure that it diffracts light, just like the wings of a butterfly. The smaller worms are pink and when they become bigger, they get blue, but we don't think it has any advantage. The color is just an accident. 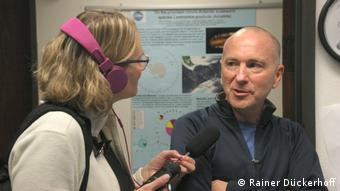 Are all of the animals living down there blind?

Yes, most of them are. Some of the shrimps that live in the mid-Atlantic ridge have eyes, but the functionality of these eyes isn't very well known. The shrimps that live near the hot water are actually able to detect infrared light from the hot water. So they know not to go near it. The scale worms we found have no eyes, they must sense each other from the movement of the water. But even if something has eyes, we don't know if the animals can see with them. We can ask a lot of questions but for many of these animals we don't have any answers.

How do the animals move from one vent to another? Because at one point, a vent will eventually die, right? 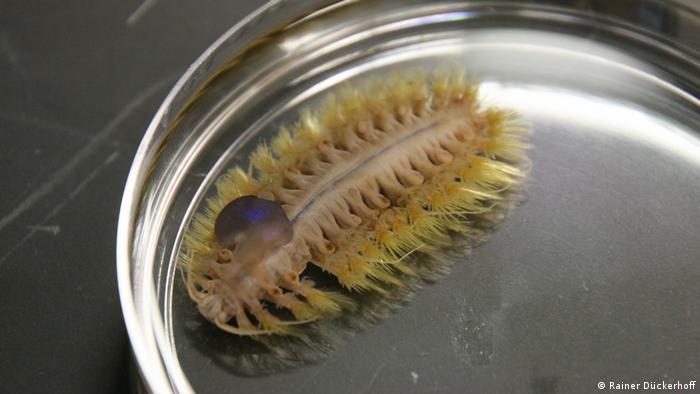 This scale worm is one of the many fascinating organisms, living at the Pescadero Basin.

At a depth of 4,000 meters, the pressure is more than 400 times the pressure that we are used to. How can an animal live under this enormous pressure?

There are animals that really do live well under pressure and they're adapted to that and if you take them out of that pressure they will die quickly. There are also bacteria that can only exist under very high pressure. But for instance, there are no fish that live below 8,000 meters or 26,250 feet.

There appear to be pressure limits at which animal physiology is fundamentally disrupted. We think it might be due to pressure effects on proteins and other things that we don't really understand very well. If you take the pressure off the proteins, they change their structure. If you apply more pressure to proteins and other chemicals, then the physiology will also break down for the animals.

You brought animals back from Pescadero Basin. How do you manage to bring them up from that depth?

We immediately kept them cold. So we put them back into very cold 2 or 3 degree Celsius, and some of them will survive for a few hours. Xenoturbellas for example, they relaxed and they were crawling around. But we always find by the next day usually things from that depth are dead. If things come from 1,000 meters or shallower, it's normally okay, we can keep them alive, even here in the lab for as long as we keep them cold. But anything below 1,000 meters you'd need normally have to keep them under pressure to keep them alive for anything more than a day.

Greg Rouse is a marine biologist at Scripps Institution of Oceanography in La Jolla, USA. He went on the ‘Falkor' cruise to Pescadero Basin in November 2018. The freezer in his lab holds reams of still unknown species, many of which live at hydrothermal vents in the deep sea.