In Zimbabwe, theater is increasingly becoming a post for free expression in a country where free speech is limited. However, every performance is about testing the ruling elite’s tolerance. 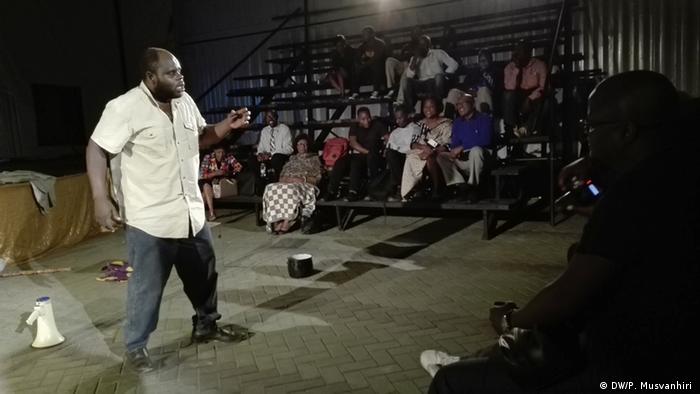 Silvanos Mudzvova, 37, a fearless Zimbabwe theater performer has been staging a one-man production named Missing Diamonds. The play was inspired by President Robert Mugabe's revelation that Zimbabwe lost $15 billion (13,1 billion euros) of diamond money in the last 10 years. In a national television interview to mark his 92nd birthday, Zimbabwe's ruler for 36 years, said his country lost billions of money to diamond smugglers and swindlers.

The south African nation discovered diamonds in the eastern part of the country in 2006, but the mining of the gems was not transparent. Mudzvova felt it prudent to speak out on the gross negligence of the state on looking after national resources. "We have a lot of things happening in this country and we are keeping quite. For how long shall we continue to be like that?" the actor questioned. Adding that Zimbabweans have reasons to demand accountability.

However, staging political satire in Zimbabwe is not an easy task. Mudzvova has had his own brush with state security. In April 2016, he was arrested at parliament buildings together with four journalists, six minutes after he had started his performance. He had been granted permission by authorities to stage his play. His laptop and cell phone were confiscated by the police. Since then he has never recovered them.

Upon their arrest, Mudzvova says, he and the four journalists were pressed to say who had sent them. They were detained for a few hours and released without charge after the intervention of human rights lawyers.

Nevertheless, Mudzvova has remained defiant. "If we all fear to an extent that we fail to perform, who is going to be the message driver for the people? We do not have an option except to do it," Mudzvova added.

Free speech is guaranteed under Zimbabwe's constitution, but the freedom after speaking is not. Artists are not always free to use their creative minds to question the ruling elite. Brave artists have stayed in Zimbabwe, but some who could not bear censorship laws have left. Harare's Theater in the Park Director, Davis Guzha, has been fighting for free expression and he thinks the artists should stand firm in front of their oppressors. "We should be able to question without fear, without any favors and actually say hey come on, what do you think about this and what do you think you are really doing," Guzha told DW. 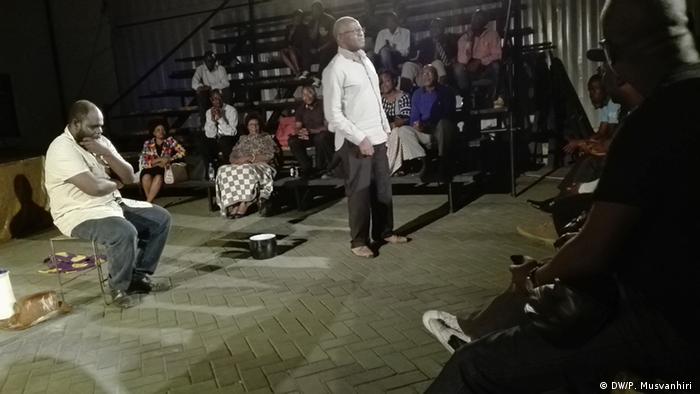 Audience reflecting on issues addressed in a play

In Zimbabwe, theater performances and films are scrutinized for content judged to be prejudicial to the state.

The director for National Arts Council, Elvas Mari, believes it is necessary to censor the arts considering how it can influence people. "Art is very powerful and it can change the way people think. So obviously we must remain alert," Mari said. Zimbabwean law demands that every theater act or film be scrutinized by the censorship board before screening.

Consequently, a number of plays and films have been banned in the past. In 2015, the government Censorship Board banned a documentary, ‘Democrats,' which narrated the 2010 – 2011 constitution making process. The board alleged the documentary was unfit for Zimbabweans. Nevertheless, the documentary produced by Camilla Nielsoon, a Swedish filmmaker has premiered at several international festivals across the world.

Freedom of expression and access to information are often associated with reporters but they are for everyone. It takes strong commitment to ensure they become reality, not just words on paper says Faith Pansy Tlakula. (28.04.2016)

Freedom House's 2015 press freedom report shows journalists around the world face mounting restrictions as well as grave threats to their lives. Jennifer Dunham from Freedom House talks about the findings. (29.04.2015)